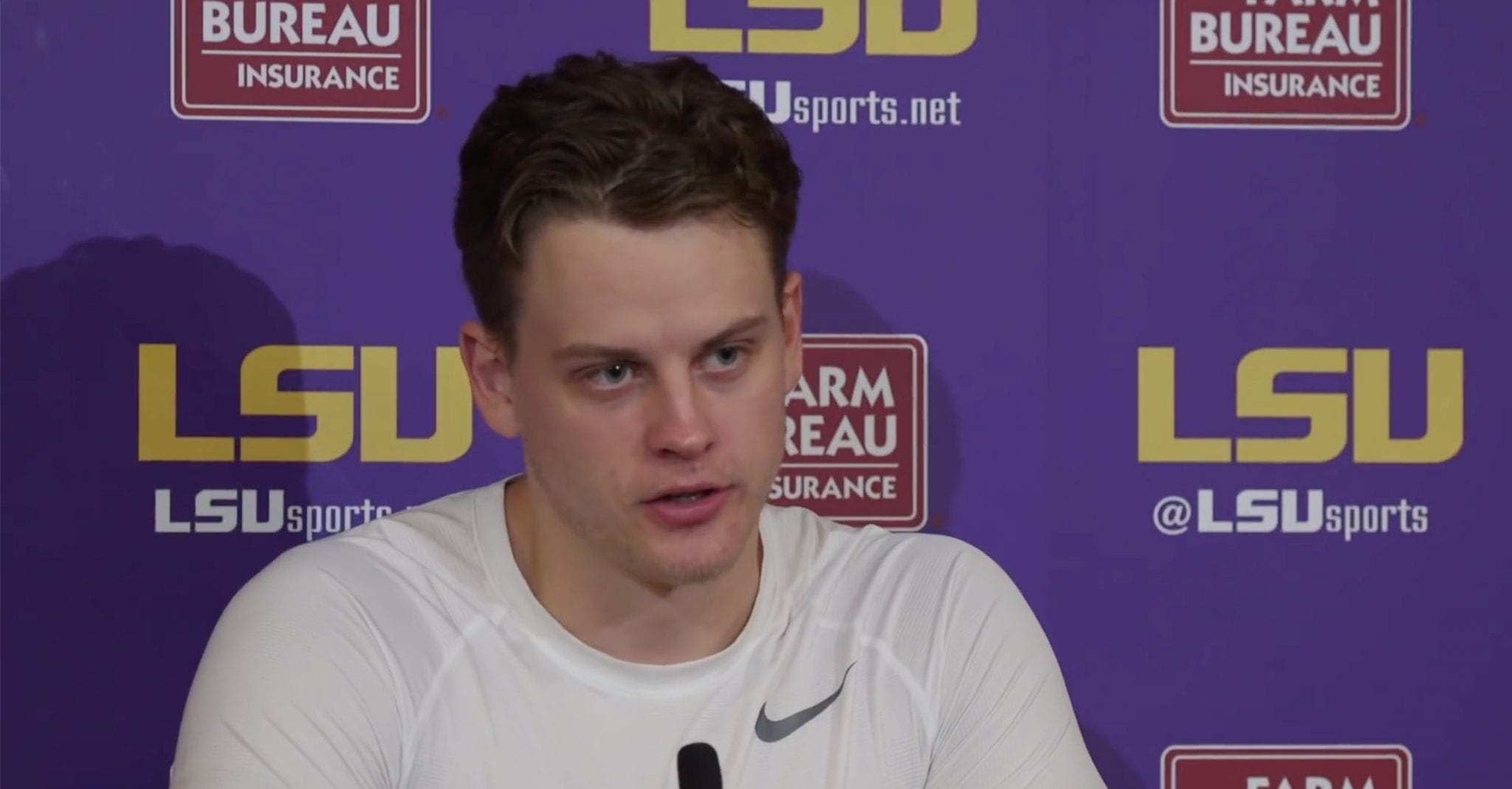 Saturday, LSU and Georgia will battle for the SEC Championship in Atlanta, and with a good performance in that game it’s likely Joe Burrow, the Tigers’ quarterback, will lock up this year’s Heisman Trophy.

It’s hard to find a better recipient than Burrow, whose dazzling senior season has vaulted him from projected late-round NFL draft pick to potentially the No. 1 player taken next April. Burrow’s performance in a 50-7 blowout of Texas A&M last weekend – 23 of 32 for 352 yards and three touchdowns – was, amazingly, not one of his better ones. This is, after all, a quarterback who in 12 games has shattered the SEC record for passing yards in a season, besting Tim Couch’s old mark with 4,366 yards and tying Drew Lock with 44 touchdown passes. If the season ended today Burrow would own the NCAA record for completion percentage — he currently sits at an amazing 78.3 percent, which puts him almost two points higher than Colt McCoy’s old record.

And, of course, Burrow has LSU 12-0 and ranked atop the AP and coaches’ polls, though LSU is dueling with Ohio State for the No. 1 seed in the college football playoff with the conference championship games in the balance this weekend.

But Burrow’s on-field stardom isn’t the only thing making him the best candidate for the Heisman this year. It’s the intangibles and what Burrow represents with respect to college football that make him a slam dunk.

Burrow, who hails from the southern Ohio town of Athens and whose father recently retired as the defensive coordinator at Ohio University, originally attended Ohio State. He found himself in a crowded quarterback room with such future NFL talents as J. T. Barrett, Cardale Jones, and Dwayne Haskins, losing twice in battles for the Buckeyes’ starting job. In the spring of 2018, when then–OSU head coach Urban Meyer went with Haskins over Burrow, he opted to transfer.

But Burrow had taken care of his business academically and graduated in only three years. He was then able to take advantage of an NCAA rule allowing players who had graduated to transfer to a new school without sitting out the customary year. Burrow picked LSU and head coach Ed Orgeron, who was desperate to find an elite quarterback to lead a talented roster, in June of 2018.

Ever since, it’s been a love affair between Burrow and the Tiger fan base, something never better put on display than last Saturday, when on Senior Night the quarterback took the field for the pregame ceremony in a jersey that read “Burreaux,” a Cajunized spelling of his last name to pay tribute to the reception LSU’s students and fans, and the people of Louisiana, have given him since he arrived.

Burrow’s probable Heisman is nothing short of revolutionary for LSU. While the Tigers have been a nationally competitive program more often than not this century, winning two national championships and playing for a third (they’ll be playing for a fourth this year, possibly even if they lose to Georgia), no LSU player has won the Heisman since Billy Cannon in 1959, and no offensive player at LSU has had a serious Heisman campaign since Charles Alexander in 1978. LSU is known for great defense, but until this year it’s been known for grind-it-out, frankly boring offensive football.

That’s all changed this year with the amazing performance behind center, and also with the addition of Joe Brady, a brilliant young offensive mind Orgeron lured away from the New Orleans Saints as the team’s passing game coordinator. Brady has teamed with offensive coordinator Steve Ensminger to rev up the LSU offense to such an extent that the Tigers averaged 48.7 points per game in the regular season (only Auburn, who lost to LSU 23-20, was able to hold them under 42 points in a game) and 560.4 yards per game of total offense, a scintillating 390 of it through the air. Most LSU fans can’t even fathom those numbers. Brady is now up for the Broyles Award as the nation’s best assistant coach, Orgeron is up for National Coach of the Year, and wide receiver Ja’Marr Chase, who has a blistering 1,457 yards and 17 touchdowns on his 70 catches this year, is up for the Biletnikoff Award as the nation’s best receiver.

That’s not all courtesy of Burrow’s efforts, but it’s clear he’s had that positive an effect on the LSU program. And Burrow has done it without any off-field incidents or any of the clownish antics so often the mark of high-profile athletes. In two years he’s established himself as not just the finest representative of LSU football but perhaps that of all of college athletics.

If and when he takes home the Heisman hardware from New York’s Downtown Athletic Club, there will be nobody more appropriate to hold that trophy.