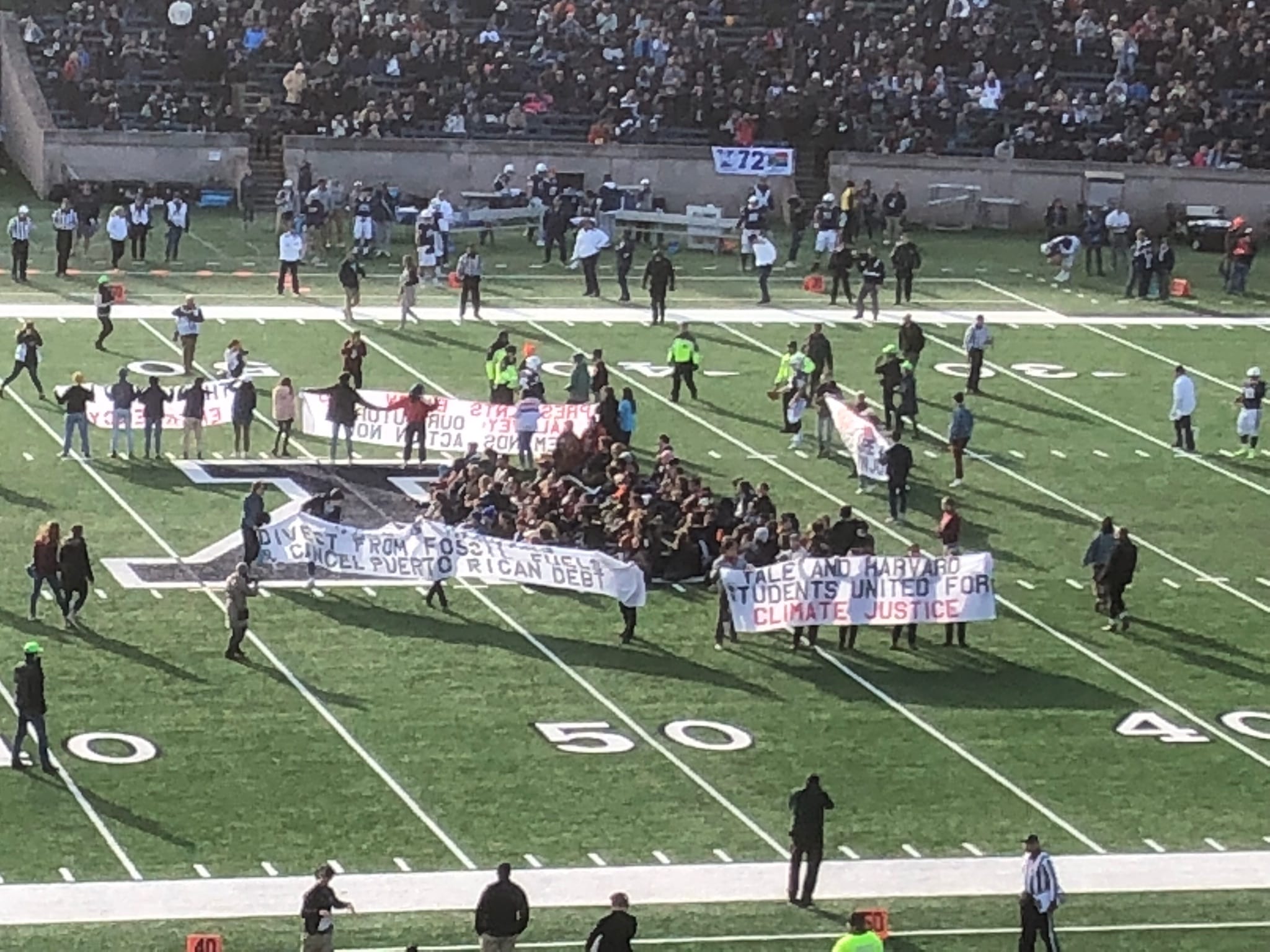 Activists protesting climate change stormed the Yale bowl field at halftime of the Harvard–Yale game. An initial group of 100 or so activists grew to more than 1,000 as students supporting their cause joined them. The mob extended from one 30-yard-line to the next as they chanted “get on the field.” 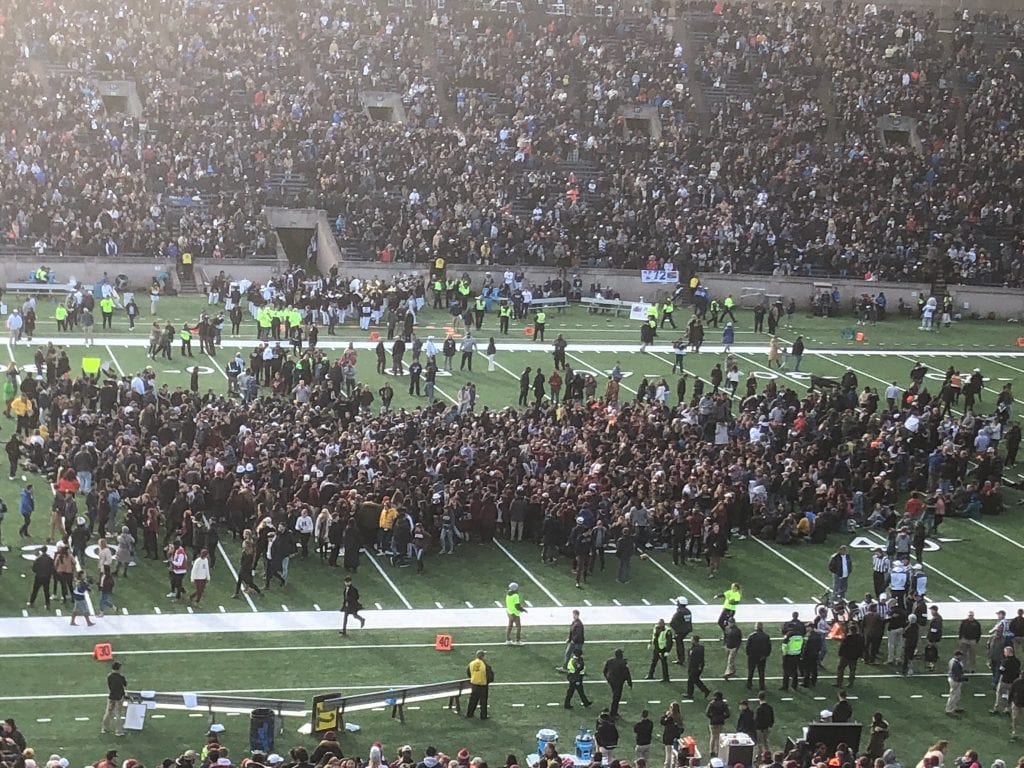 The Harvard-Yale football game has been delayed due to students protesting climate change in the middle of the field. pic.twitter.com/uY9Kc3Mn32

ESPN declined to show the protest. Players from both teams returned to their locker rooms. Repeated calls from the public address system to “please return to your seats” did nothing as the protest lasted more than 30 minutes.

At this writing, a smattering of activists still fill the field. Police officers are quietly observing but not removing them. It would be easy to get the protesters off the field as police officers outnumber activists. So far, no action has been taken.

Reaction from the crowd is mixed. Some of the people in the crowd booed. Other crowd members joined the activists on the field or cheered.

One fan was heard saying, “No one cares!”

Another fan said, “This is what happens when two liberal schools play football.”

A few players have come back to the field to warm up.

It is still a question whether or not Yale will have to forfeit the game.

The police are now escorting activists off the field. Yale players have retaken the field. The game should resume. The score at halftime was 15-3 with Harvard leading.

Cheers erupted when the police removed the last protester from the field.

Once removed, protesters are chanting “Cancel the debt” outside the stadium. 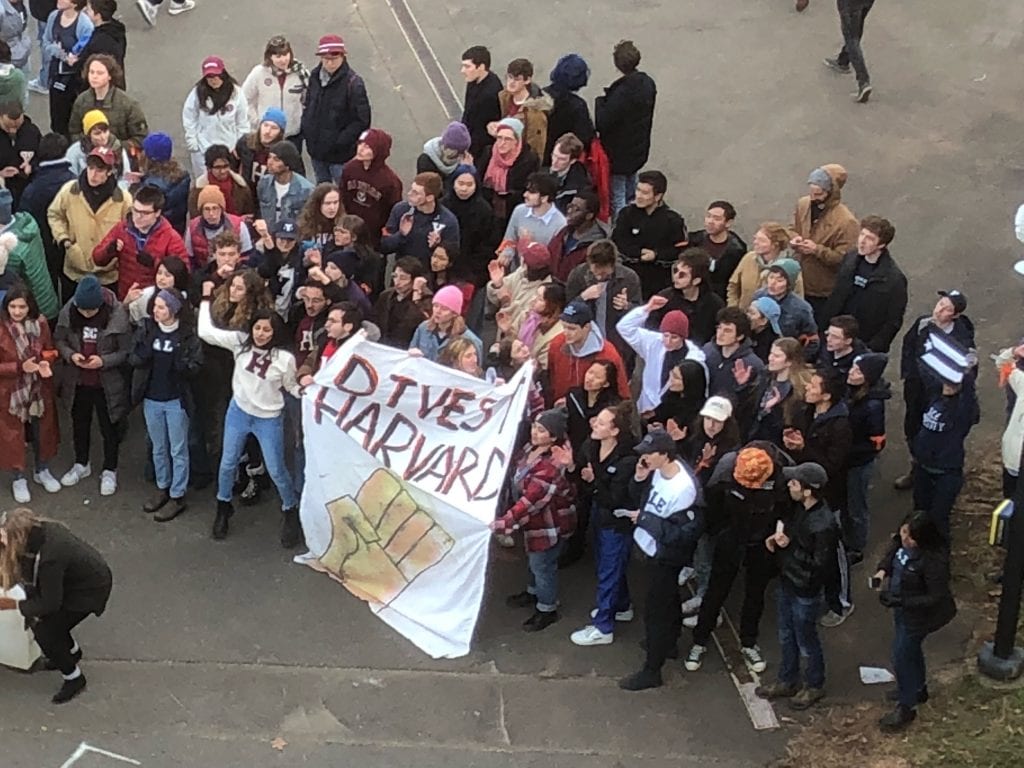 Outside the Stadium Yale

Yale resumed the game at 2:48 p.m. after an hour-long delay. Chanting continues with the new chant being, “What do we do when our planet is under attack? Stand up! Fight back!”

The Bernie Bros are excited about the ruckus created:

Both teams are being ridiculed on Twitter. Here’s a sample:

Harvard and Yale? They aren’t disrupting much football anyway. Try this stunt at LSU vs Alabama and see how far you get.

Protestors have successfully raised awareness that Harvard and Yale have footballs teams https://t.co/KuQxMjVcOK