Whenever my wife and I have out-of-town visitors to our home in St. Louis, I ask if they are willing to have us show them Ferguson. After overcoming their trepidation, we head due north from our home in an old neighborhood on the near south side of the city of St. Louis. After 15 minutes, we are in a nightmarish landscape of vacant and collapsing red brick houses.

“Ah, this must be Ferguson,” the sophisticated guest from Tokyo or Manhattan or Mexico City invariably says.

“No,” I reply. “This is St. Louis. We’re in the city — north St. Louis.” We head north-northwest for another 15 minutes until we are on a sylvan street across whose huge front lawns stand massive, immaculately maintained Victorian, Tudor Revival, and Stickley Craftsman style homes dating from the 1890s through the 1910s.

“When are we going to get to Ferguson?” I am asked.

The tour continues as we head east for a couple of miles to West Florissant Avenue, Ferguson’s boulevard of broken dreams. Strip malls with mostly empty parking lots, liquor stores, a pawn shop, check-cashing establishments; this is what visitors conditioned by the global media industry expect. Here is where most of the mass protests, arson, riots, and looting took place five years ago this week following the death of Michael Brown, a young black man shot during a confrontation with a white Ferguson police officer.

We go a couple of blocks east of the strip malls and visit the site of Michael Brown’s residence and the street where he died. It is a complex of pleasant-looking low-rise apartment buildings with mature trees and large, manicured lawns. Here we’re just barely inside Ferguson; a couple of blocks further east, it’s the same neighborhood, but we’re no longer within the Ferguson city limits but in an unincorporated part of St. Louis County. We go back to West Florissant Avenue and head north a few short blocks, maybe a five-minute walk from Michael Brown’s home. The commercial and residential and socio-demographic character of the place is the same, but now we are in Dellwood, a little municipality of 5,000, carved out of the east end of Ferguson. Continuing north across Dellwood for a few blocks, we’re back in Ferguson again.

Had the Michael Brown incident happened a few football fields away from where it did, PBS and BBC and Al Jazeera’s thumb-suckers might have asked their viewers to join them in pondering The Meaning of Dellwood. Think-tank charlatans would have been lining their pockets with East Coast foundation money as they constructed and picked apart useless theories of the “Dellwood Effect.” And none of this would have addressed the reality of Dellwood, or Ferguson, or greater St. Louis.

But there’s more to see in Ferguson. We return westward on Ferguson Avenue and skirt the corporate headquarters campus of Emerson Electric, a Fortune 200 global giant within Ferguson’s boundaries. Past Emerson, finally we see some blighted housing — a collection of tiny, mill-village style frame houses in poor repair, some of them boarded up. We pass through the elegant Old Ferguson East neighborhood where the tour had begun, and we’re in the historic center of Ferguson as it had been when the town was incorporated in 1894. Here there’s a church on almost every corner: Episcopal, Lutheran, Catholic, Presbyterian, and more.

Ferguson was incorporated 125 years ago because it was then a growing railroad suburb. Just before the dawn of the Automobile Age, middle-class St. Louisans could enjoy a suburban life while commuting from the Ferguson railroad station to downtown St. Louis 15 minutes away. The station, now a sandwich and ice cream shop, stands on a height above the principal street of old downtown Ferguson, known as South Florissant Road although it is west of West Florissant Avenue. The old railroad suburb core of Ferguson is almost a mirror image of Kirkwood and Webster Groves, two affluent St. Louis suburbs also formed in the late 19th century beside commuter rail depots. Racist responses to desegregation of housing during the 1960s and 1970s indeed were a major cause of Ferguson falling from affluence. Today hope endures that things will change for the better.

Next the tour enters Old Ferguson West. Like Old Ferguson East, it is a National Register of Historic Places residential district. The beauty and gentility extend over 10 square blocks or so, and then we encounter blight again: tiny, ramshackle houses, many of them vacant.

Before the western boundary of old Ferguson, there is a final surprise: EarthDance Organic Farm School. From the 1880s until a decade ago, the Mueller family produced organic fruits and vegetables here. Recently, as the last generation of farming Muellers no longer had the energy to operate the place, a young woman from Ferguson with a genius for fundraising and organization, Molly Rockamann, chartered a nonprofit and bought it. The 14-acre farm produces and sells fruits and vegetables while conducting courses in organic growing methods for both adults and children. Some of the most prominent chefs and catering executives in St. Louis now devote the better part of a growing season obtaining a sort of “executive MBA” in organic farm-to-table production. The farm is a productive enterprise in agro-historic preservation. It’s the oldest continuously operated organic farm west of the Mississippi. And it’s all within Ferguson.

Old downtown Ferguson hosts a lively Saturday farmer’s market, and the neighborhood’s collection of restaurants offer some of the best dining in north St. Louis county. A young couple from Ferguson, Mike and Lizzie Lonero, following the initiative of Mike’s father, operate a bustling microbrewery, a pizzeria, an Italian home-cooking restaurant, and, until recently, a popular wine bar that they have sold to other entrepreneurs. On the same short strip are a very good soul food establishment, a marvelous barbecue ribs place, and the best Thai restaurant in the whole St. Louis area. 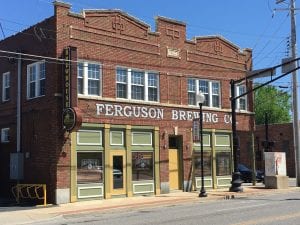 Just a mile or so south of the microbrewery and the wine bar, we’re out of Ferguson again. We’re across Interstate 70 and on the sprawling campus of the University of Missouri-St. Louis and the corporate headquarters of the hugely successful Express Scripts, founded only a quarter century ago by an alumnus of the university. The unrest five years ago briefly depressed enrollment at the university, but now things have returned to normal there, and the Ferguson eating and drinking establishments attract students and faculty. At lunchtime, the better downtown Ferguson eateries are packed with people from Emerson and Express Scripts, as well as from Boeing Defense and Space headquarters, the former McDonnell Douglas campus, only a mile west of EarthDance Organic Farm.

After all of this, we’ve only seen about half of Ferguson, population 20,000. North of the places we’ve toured are suburban subdivisions developed in the 1950s, 1960s, and 1970s. They range from modest 1950s starter homes to large upper-middle-class residences along a lake.

Ferguson has rough edges, and it has a tragic recent history, but it is not urban, and it is not a slum.

If one is not afraid of Ferguson — and one shouldn’t be — it’s a place of opportunity. Ferguson can and should become a test bed for President Trump’s Opportunity Zone program providing huge tax incentives for long-term investments. About half of Ferguson falls within a designated Opportunity Zone.

Ferguson is only about five minutes from the St. Louis International Airport. It’s worth a visit for plucky investors or simply for citizens who should see for themselves what the town is really like when the imported rioters and international TV cameras are gone. If you don’t know Ferguson, don’t let your chance go by.