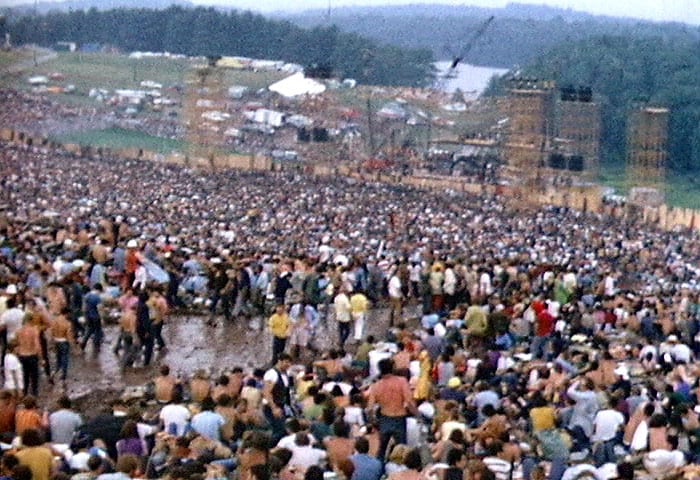 Well, all the palaver about the 50th anniversary of Woodstock has finally shut down. The reminiscences, the brave statements, the claptrap about how beautiful we all were — it is over. Now the Woodstockians can get back to their retirement communities, their gerontologists, their rehab centers yet again.

Apparently I am not going to be invited back to reflect on that idiotic jamboree. I actually made a memorable appearance but not at Woodstock. I avoided the mud and the cheap wine, beer, and illicit drugs. Yet when NBC wanted to commemorate the 15th anniversary of Woodstock I made a clever effort to be there.

It was not because I was interested in rock ’n’ roll or because I was a radical student who opposed the war in Vietnam and deodorant. It was because I have long had a sociological interest in the 1960s generation. I favored the conservative element of the generation. I was critical of the radical element of the generation. I knew by 1984 that the radical and doped-up members of the 1960s generation had generally composed the audience at Woodstock, and I wanted — 15 years later — to render my judgment. A nationally televised stage would be the perfect place to do it.

A producer from NBC called my office and told me they were thinking of me, the editor-in-chief of The American Spectator, to make an appearance on their 15th anniversary program called “Summer Sunday USA.” Would I as a conservative come along and participate? I was asked what I was doing during the original Woodstock extravaganza. Well, if I wanted to be on the show, now was the time for some cunning. In truth, I was, as the Woodstockians howled and sloshed around in the mud, probably washing my car or sunning myself, but that would not be good enough for the producer from NBC. So I fabricated. Possibly, I said that I was diligently practicing the national anthem on my harpsichord. Possibly, I said that I was stamping envelopes at the local American Legion Post.

Whatever I said, it obviously hooked NBC, and shortly thereafter I was on my way to Woodstock in an NBC limousine. I invited the writer Roger Kaplan along. He had been in the radical SDS back in the Woodstock days. Now he was writing for conservative journals. I wanted to see how he would react.

We were going to be out in a corn field with William Kunstler, the radical lawyer, Bobby Seale, co-founder of the Black Panthers who now was hawking a cookbook featuring, I believe, barbecue recipes. Then there was someone called Wavy Gravy, possibly from Harvard University’s Department of Philosophy.

As we got acquainted I looked around the field for Joan Baez. She was billed as making an appearance with us, and really of all the luminaries on “Summer Sunday USA” she was the only one in whom I was interested. She was reported to have given up on the North Vietnamese because of their dreadful record on human rights, and I had been told her decision did not sit well with her friends on the left. She interested me for her adherence to principle, and — forget not — her marvelous voice. Alas, she was taped in a studio in Manhattan. Now all I was left with was Kunstler, Seale, and Wavy Grave, the guy from Harvard.

Our panel appearance went okay, though I would have been more interested in it if Joan had been there. As I recall, in concert performances she often took her shoes off and she played a wonderful guitar. Kunstler sat on my left, Seale on my right. I have forgotten where Wavy was. Finally, after Kunstler’s verbosity and Seale’s maudlinity, I got my chance to render my solomonic judgment on the Woodstock generation. I said all that the Woodstock generation could take credit for 15 years after the event was “a growing rate of illegitimacy, along with a rise of petty lawlessness, drug addiction, welfare, venereal disease, and mental illness.” That cracked Kaplan, sitting offstage, up. I sensed the camera crew too enjoyed it. However, the line did not go over so well with Kunstler and Seale.

For some reason there was a lot of beer drinking in that field before and after NBC’s 15th anniversary commemoration of Woodstock. By the end of our presentations the participants had become oddly melancholy. Seale confided to me his sense of hurt with his publisher because the co-founder of the Black Panthers had failed to turn in the contract’s obligatory number of “low-salt” recipes. Wavy Gravy was downright weepy. He blubbered to me that “It is strange to see lines on faces that 15 years ago looked so young.” Possibly he was a dermatologist.

Well, Woodstock at 50 has come and gone with no appearance from me. Yet Kaplan was still full of hope. If America continues on its present course, he said, there will indeed be a “Woodstock at 75.” Possibly, I will then be invited, and, if the Left has its way, “Woodstock at 75” will be a national holiday presided over by America’s first LGBTQ president.

Watch some of the footage here.