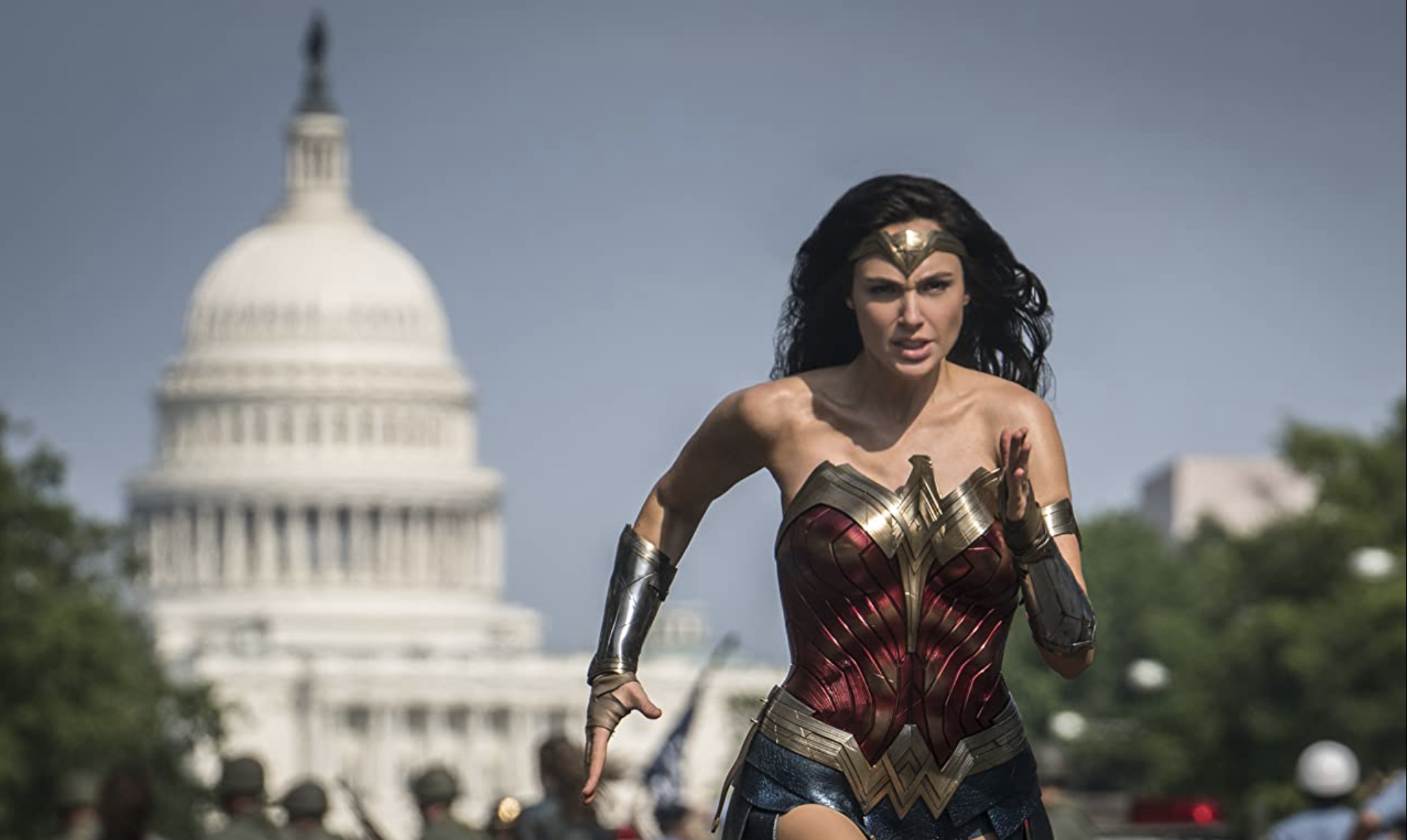 Just as COVID-induced starvation for new movies was beginning to set in, with superhero fans gnawing on the bones of obscure 1980s action numbers, DC Comics rides to the rescue with, well, Wonder Woman 1984. The film literally opens with exciting horseback riding, in a flashback to a youthful Diana, daughter of the Amazon Hippolyta (and of Zeus — although no male is worthy of so much as a mention in that sequence). Diana later grows up to become Wonder Woman after she leaves the timeless mythical safe space of Themiscyra. She enters war-torn 1918 Europe and becomes a Kraut-smashing Great War heroine in 2017’s Wonder Woman.

That film drew attention because of its feminist superhero take and leading lady Gal Gadot’s well-defined muscle groups and classic beauty. But what earned it a place among the genre’s better films was Diana’s futile quest to end war by hunting down and killing the god of war Ares, juxtaposed against a backdrop of mankind’s naive “war to end all wars.” That choice was refreshing when compared to the lower-hanging fruit of World War II Nazi evil that appears in the competing Marvel Comics backstory.

Placing this epic smack-dab in the middle of Reagan-era America in the new film produces more than its share of clichés, with the villain being a self-promoting oil-man who, to mix metaphors, is all hat and no cattle. We are treated to 1980s mall culture, break-dancing, parachute pants, mutually assured destruction, the first generation with ubiquitous divorced parents where dads have “their weekend,” and much else that is forgettable about that otherwise memorable decade when Americans collectively decided they’d had enough of national decline. Still, given that the immortal and polyglot Wonder Woman could have chosen anywhere on the planet to live in the 1980s, one isn’t really surprised to find her working at the Smithsonian.

The plot revolves around a Dreamstone that gives any wish to the one who touches it but takes something of its choice in return. Diana unwittingly wishes to have back the love of her life — deceased World War I ace pilot Steve Trevor — allowing the always reliable Chris Pine to make a welcome reappearance. Keen historical sleuthing by one of the characters reveals that wherever the Dreamstone has appeared in history, giving people what they wish for, civilizations have suddenly disappeared. This doesn’t bode well for the 1980s, since we have been already been laboriously educated on that decade’s untoward appetites.

One would like to credit director Patty Jenkins with subtly pointing out that the global interconnectedness beginning to emerge in 1984 now allows worldwide havoc to be wreaked by cultural viruses whose reach would, in the past, have devastated only a local civilization. One also hopes to find reference to a more famous literary incarnation of the year 1984, since a point is made of putting that specific year in the title. In order to credit filmmakers with such messages, however, there have to be hints of self-awareness. The film’s ham-fisted moralizing on other subjects (greed is bad, truth is good, be careful what you wish for) leads one to the conclusion that any such allusions are, sadly, solely in the mind of the viewer.

The decision by Warner Brothers to release Wonder Woman 1984, and indeed its entire 2021 slate of films, simultaneously in theaters and on HBO Max has not been without controversy. Director Christopher Nolan (the Dark Knight series, Inception, Tenet) used words like “messy” and “bait and switch” to describe the decision to stream movies directly that were intended for the big screen. Certainly, viewers are going to be disappointed if they expect productions of the quality they are used to without budgets that only big box-office earnings can provide. But with a lumbering 2½-hour running time and confused plot, at times one is grateful to be watching Wonder Woman 1984 at home rather than in a movie theater, since one is able to hit pause and look things up on Wikipedia to help follow the storyline. The question arises whether we are in for more of the same when there are few, if any, pressures on directors to create tightly woven films that allow for an extra showing at the crowded local multiplex.

Unlike this review, which has a strict word-count limit that tends to prevent meandering prose, Wonder Woman 1984 gives the impression that nothing was left on the cutting room floor. Many a lengthy “director’s cut” has shown that more is not necessarily better, and this film makes that case as well as any. If simultaneous releases become the new normal for the film industry, one hopes that directors will learn to use the lack of time restraints wisely, giving viewers a longer yet well-crafted story that holds up on the small screen while still making them yearn for the full big-screen experience.