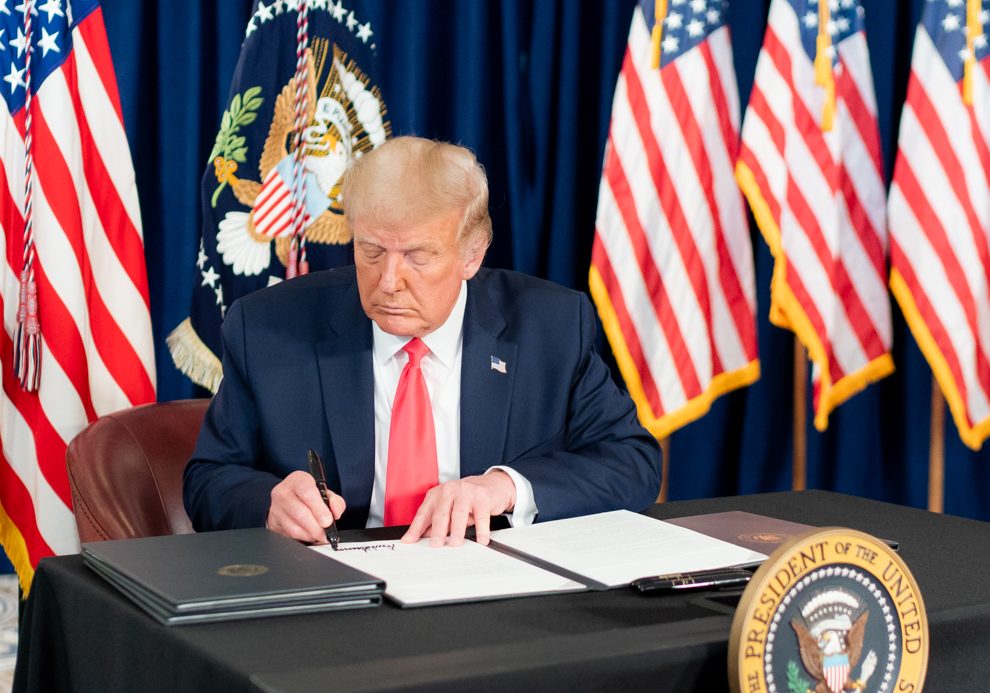 With Congress still at a weeks-long standstill over the details of the second stimulus package, President Trump took initiative on Saturday by signing a series of executive orders aimed at bypassing legislators in order to renew and strengthen expiring coronavirus relief measures.

The White House’s extraordinary measures consist of four main aspects. The first is a $400 weekly enhanced unemployment benefit meant to replace the $600 benefit that had expired at the end of July. States are expected to pay for $100, or 25 percent, of the benefit to each unemployed American, while the federal government will pay for the rest.

The second is a payroll tax deferral through December 31 for taxpayers making less than $4,000 on a biweekly basis. While not a permanent cut — the deferred amount will still have to be paid next year — White House economic adviser Larry Kudlow estimated that the measure would amount to a temporary boost in take-home income of about $1,200 for the average American worker.

Third is an extension of the student loan relief program that Congress had passed as part of the CARES Act in March. With the expiry date pushed from September 30 to the end of the year by Trump’s executive order, Americans with student loans will enjoy an additional three months of suspended loan payments and interest.

The fourth and final measure consists of a relatively vague directive to several executive branch departments to “consider” halting residential evictions if necessary to “prevent the further spread of COVID-19.” Evictions and late fees had been banned under the CARES Act up until July 25, though landlords are still prohibited from forcing tenants to leave until August 24, which should give the Trump administration time to act under the terms of Saturday’s executive order.

Senior Democrats were quick to condemn Trump for what they argued were actions that both failed to go far enough and also overstepped presidential authority. House Speaker Nancy Pelosi (D-Calif.) went on “Fox News Sunday” to accuse the president of having “delayed and distorted” the government’s response to the coronavirus crisis — nevermind the fact negotiations in Congress over a second stimulus package had gone nowhere since mid-July.

There are some legitimate questions about how Trump’s orders might translate into policy. The biggest concerns are over funding: the requirement that states pay for a quarter of the renewed unemployment benefits will be a hard sell in parts of the country where local governments have been teetering from reduced tax revenue. There are also concerns that the benefits delivery mechanism proposed by Trump may necessitate a separate system from the one put in place by Congress, which could delay payments by several weeks or even months.

Nonetheless, Treasury Secretary Steve Mnuchin was correct in his observation on Sunday that Trump has outfoxed Democrats by beating them to the delivery of stimulus. Pelosi and Schumer had effectively wagered that they would be able to ram through parts of their ludicrously ambitious $3 trillion HEROES Act by bringing negotiations to a standstill and then pinning the blame for lapsed coronavirus protections on Republicans.

By circumventing their blockade, Trump leaves Democrats with few good options. A legal challenge can probably be expected, and would admittedly be justified on the grounds that the power of the purse is meant to reside with Congress. Yet suing to strip millions of Americans of protections and benefits, a mere three months out from the general election, would be an epic blunder for liberals and a PR victory for Trump.

Doing nothing, however, would allow the Trump administration to take full credit for renewing stimulus. Pelosi and Schumer may be forced to come to a quick agreement on Mitch McConnell’s terms in order to avoid this. The efficacy of Saturday’s executive orders are open to question, but the savviness is undeniable.