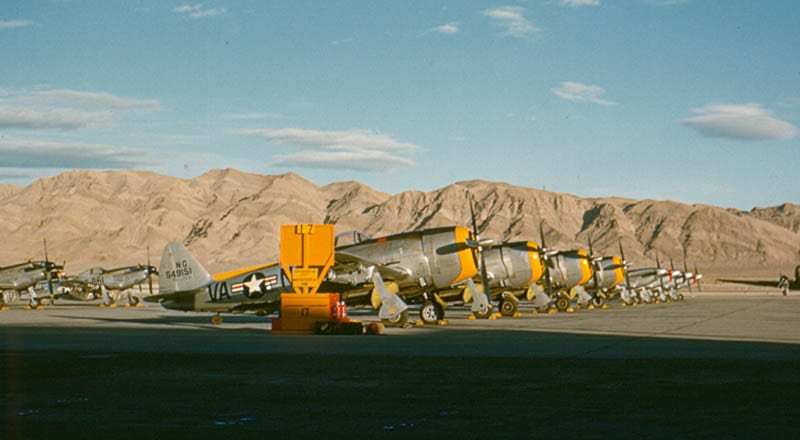 Later this month will mark the 75th anniversary of the biggest air battle — actually week of air battles — of World War II. Operation Argument, informally known to the flyers who had to execute it and the journalists who wrote about it as Big Week, is not as well-known as other turning point engagements in the war. But it should be.

During the third week of February, 1944, the first day-after-day, round-the-clock pounding of strategic German targets by hundreds of allied heavy bombers, and the wholesale destruction of the Luftwaffe fighters who came up to defend the Reich against the bombers, helped make the invasion of Fortress Europe, which came less than four months later, possible. Possible because by June of 1944 the skies over occupied Europe belonged to the allies.

Nazi war planners had given up on invading England after they failed in the Battle of Britain in 1940 to gain air supremacy over the English Channel. It would not have done for RAF Spitfires and Hurricanes to be ripping up Nazi landing operations with cannon, machine guns, and bombs. Likewise the allies knew that for Operation Overlord, which began on the beaches of Normandy on June 6, 1944, to be successful it would not do to have the landing troops having to deal with swarms of Messerschmitts and Focke-Wulfs as well as the plentiful coastal defenses. Almost no Luftwaffe fighters appeared June 6 and thereafter as they had been previously shot from the skies by allied planes or were grounded for lack of fuel to power them (always in short supply both for the Luftwaffe and the Wehrmacht) or pilots to fly them.

British author and historian James Holland (The Rise of Germany, 1939-1941, The Allies Strike Back, 1941-43, Fortress Malta, and Dam Busters) gives us a definitive, detailed, and highly readable (i.e., non-academic) portrait of this sustained air assault which was such an important step on the way to V-E Day. He does this through the use of interviews with survivors, official records, letters, diaries, and other accounts of these pivotal events. He parses not only Operation Argument and Operation Point Blank which preceded it, but also the deadly time of high allied bomber losses in 1942 and 1943 when the USAAF and the RAF were sorting out the best way to assault the Nazi war machine from the air — the only way to get at it then — and building up the resources and establishing the tactics to do this.

WWII documentaries can make the events and sequence of the war and the allied victory appear seamless and inevitable. They were anything but. Final victory depended on a constant refining of tactics and strategy, allied technological advances that far outstripped those of Nazi Germany, a Herculean effort on the part of American and British industry to provide the needed planes, and the courage and selfless sacrifice of millions of servicemen who flew the unfriendly skies of Europe in terrible conditions and against almost unbelievable odds.

Holland parses this deadly conflict from the point of view of generals and planners — we meet and follow the thinking of General Hap Arnold, commander in chief of United States Army Air Forces, and Air Marshall Sir Arthur Harris, commander in chief of RAF Bomber Command — as well as the airmen who flew the missions and whose lives depended on the decisions the generals made. The thinking changed greatly based on events as the war progressed. It was originally thought, for example, that the mighty B-17, with its gunners and thirteen .50-caliber machine guns, could defend itself against Luftwaffe fighters without its own fighter escort. This revolutionary plane, early thinking went, was not called the Flying Fortress for nothing. This proved to be an error, and a disastrous one for thousands of bomber crewmen shot from the skies by German fighters. Sixty B-17s were shot down in the August 17, 1943 raid on the ball bearing plant in Schweinfurt alone. Each B-17 carried a crew of 10. So do the melancholy arithmetic.

The arrival of P-47 Thunderbolts, and finally the long-range and high-performing P-51 Mustang, made bombing missions less dangerous, though never a walk on the beach at the best of times. Holland’s description of the conditions in the B-17s and B-24s (at 25,000 feet these planes brought this week’s Midwest arctic vortex with them), as well as the dangers from enemy fighters and flak, will make readers marvel and be thankful that so many young Americans who flew in them were willing to lift off against such odds time after time.

As hard as conditions were for allied flyers — B-17 crewmen faced the less-than-50-50 chance of completing 25 mission before being taken off combat duty — conditions were even worse for Luftwaffe pilots. Thanks to the fact that the little corporal had declared war on countries having at least four times the population of Germany, he never had enough pilots to defend against the planes and pilots the allies turned out. Luftwaffe pilots didn’t have a set number of missions before being relieved. They simply flew until they died or were too badly injured to fly. Many of them flew hundreds of missions. The only things that kept them on the ground was bad weather or the chronic shortage of fuel both Axis powers suffered from throughout the war.

In the months leading up to the D-Day invasion allied bombers continued to pound away at war production, fuel, and transportation targets inside Germany. And the bombers also acted as bait to draw the German fighters up, which were then dealt with by the P-47s and P-51s. This task was made easier by the fact that the aforementioned fuel shortage led to the Germans sending poorly-trained pilots to combat squadrons. By 1944 a typical rookie Luftwaffe pilot would be sent into combat with fewer than 150 air hours of training. These pilots didn’t last long against the much better trained allied flyers. It was a dangerous battle of attrition, which the allies had won by the spring of 1944. The GIs and Tommies who hit the beach at Normandy on June 6 had reason to be glad of this, even if they didn’t know it at the time. They had more than enough to deal with without a sky full of Messerschmitts.

Conflict is a constant in the human project. And World War II was the mother of all conflicts. So much of what America and the rest of the world is now has been shaped by that war. Sadly, our memory of this cataclysm and the culture that came from it is dying, as are the remaining veterans of the war. (The 20-year old B-17 crewman who finished his 25 mission in 1944, if he were still alive today, would be 94.) This is a great cultural loss. Fine treatments like James Holland’s Big Week help keep this memory alive and a valuable part of us. This one is well worth the reading time.