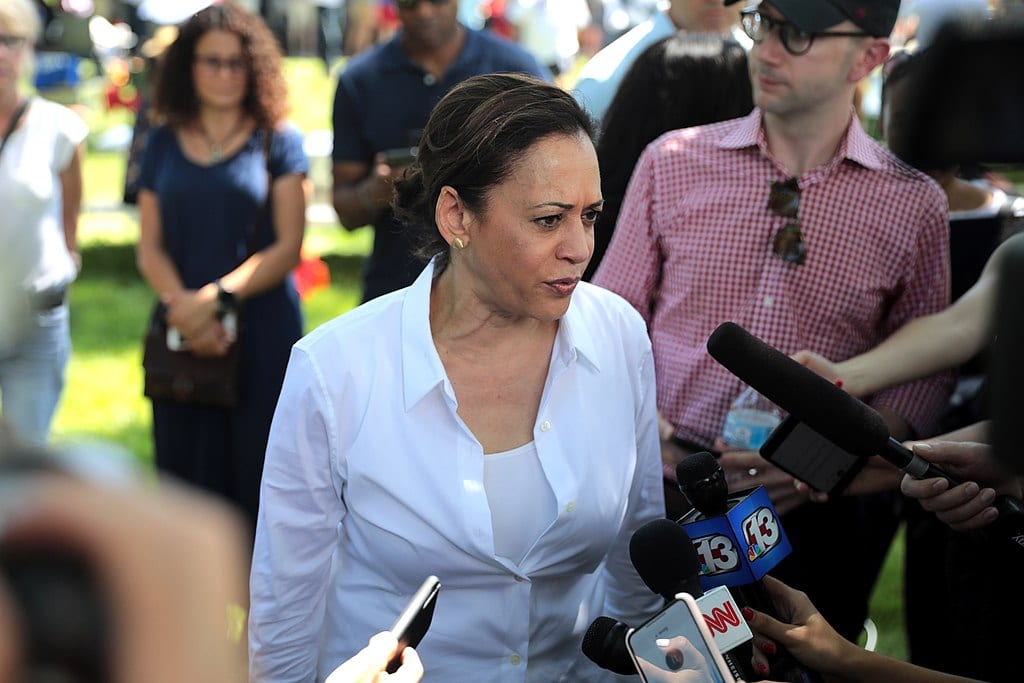 There in Elle magazine was this article by California’s Democrat Sen. Kamala Harris.

The article was headlined this way:

By this point, Brett Kavanaugh had been confirmed for a seat on the Supreme Court and sworn in for almost a year. But Harris was still fuming about his confirmation amidst a charge of sexual assault from his high school days. So the senator took to the pages of Elle and said this, with bold print supplied:

Our society is littered with glaring examples of the rich and powerful facing minimal consequences for their actions — often until their secrets are unearthed and public outcry ensues. In some cases, the rich and powerful not only escape accountability altogether, but are handed even more power despite what they have done. It should come as no surprise then that many Americans have lost faith in our democracy and in our system of justice. No person, no matter how rich or powerful, should be above the law or escape accountability. But, that is not the example we see.…

After allegations of sexual assault surfaced during Brett Kavanaugh’s confirmation hearings, I saw up close that the hearings and FBI investigation were not a serious pursuit of truth or justice. What we saw instead was a process that failed to properly acknowledge and believe the survivors of sexual assault and misconduct. That process ultimately failed people across the country, especially women.…

We have a responsibility not just as public servants, but as mothers and fathers, sisters and brothers, and fellow humans to hold people accountable for wrongdoing. Failure to do so sends a message to little girls and boys — and women and men — about the value of truth and honesty, and about their right to safety and autonomy. If we stand idly by, we are telling them that our country values the easy way out over doing the right thing.…

We still have a chance to get it right.

The article was accompanied by a photo of Harris at a podium outside the Capitol building, a “Stop Kavanaugh” sign in front of her. Notably, next to her was a young woman with a hand-lettered sign that read, “Believe Survivors.”

CBS headlined its report on Harris’s article this way:

The report linked to this letter from Harris on her official Senate stationery to House Judiciary Committee Chairman Jerrold Nadler. The letter requested that Nadler hire outside counsel to “help lead impeachment inquiries” against now-Justice Kavanaugh.

Now comes one Tara Reade, a former staffer for then-Sen. Joe Biden. Ms. Reade is on record as saying this, as reported by the Washington Times:

In recent weeks, she’s given a handful of interviews saying Biden’s actions went further that she initially disclosed. In an interview with the AP, she detailed a 1993 encounter that she says occurred when she was asked by a supervisor to bring Biden his gym bag as he was on his way down to the Senate gymnasium. She says Biden pushed her against a wall in the basement of a Capitol Hill office building, groped her and penetrated her with his fingers.

“He was whispering to me and trying to kiss me at the same time, and he was saying, ‘Do you want to go somewhere else?’ she said. ‘I remember wanting to say stop, but I don’t know if I said it out loud or if I just thought it. I was kind of frozen up.’ ”

And the reaction from Harris, not to mention other female Democrats mentioned as a potential running mate for Biden? Here is this from Fox News:

Reade, a life-long Democrat, later called out the politicians on Biden’s VP shortlist over their “silence” on her assault claim, including Sen. Kamala Harris, D-Calif., Sen. Amy Klobuchar, D-Minn., and Sen. Elizabeth Warren, D-Mass., who she had supported for president during the Democratic primary before supporting Sen. Bernie Sanders, I-Vt.

“What I’d like to say to the slanted reporting where they are omitting details, where they are not investigating corroborating [testimony], what I would like to say to them at this point and some of the silence from some the candidates Kamala Harris, Amy Klobuchar, Elizabeth Warren that at this point, if you continue to silence me, if you continue to engage in protecting a powerful man without giving my case a closer look, you are complicit in rape,” Reade declared.…

The offices of Sen. Harris, Sen. Klobuchar, and Sen. Warren did not immediately respond to Fox News’ requests for comment.

So the obvious question: If Biden chooses Harris as his running mate — and Biden says he’s “coming for her” — will Harris’s mere presence on his ticket effectively backfire, with the Trump campaign and conservative media focusing on the mammoth hypocrisy of Harris’s stance on Kavanaugh — and silence on Biden?

For that matter, in light of Biden’s stated intention to name a woman as his running mate, will that in fact now backfire as the question gets put to that running mate about whether or not he believes we should “believe survivors”?

Last night, this was the new headline at Fox News:

Memo to the Biden campaign: This isn’t going away.

The stench of hypocrisy is too strong.