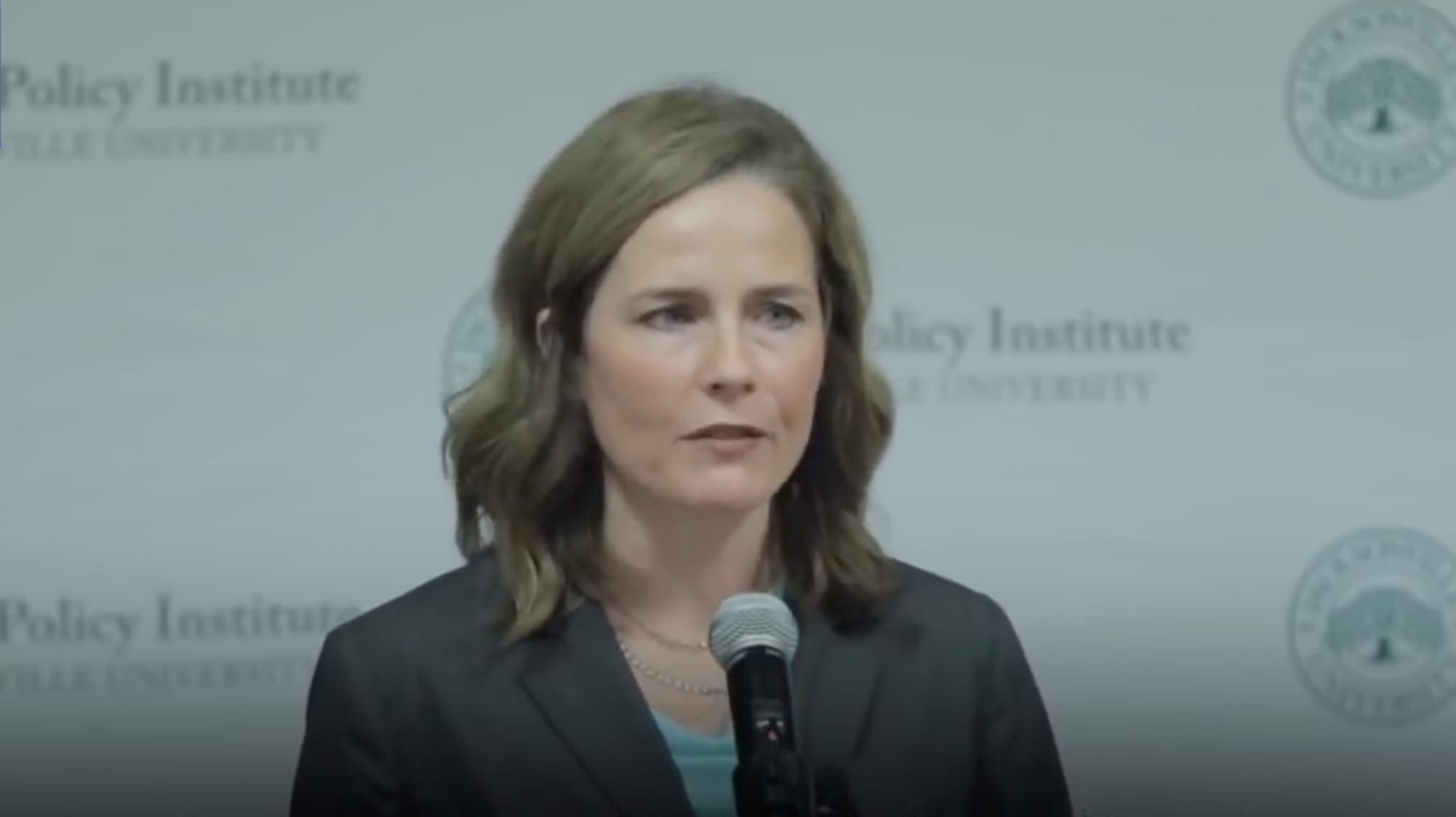 Since Amy Coney Barrett appeared on President Trump’s shortlist of potential replacements for Justice Anthony Kennedy on the Supreme Court, the Democrats, the legacy “news” media, and a motley mélange of social justice warriors have behaved as if he intends to nominate Lizzy Borden. Having declared that “reproductive rights” and “health care” are the most important issues to be explored in the upcoming Senate confirmation hearings to which Trump’s SCOTUS nominee will be subjected, the Democrats and their accomplices would have us believe that Judge Barrett plans to give Roe v. Wade forty whacks before taking her ax to Obamacare.

In reality, Barrett’s opinions on these issues don’t differ substantially from the other two people on the President’s shortlist, Judges Brett Kavanaugh and Raymond Kethledge, but the Democrats don’t want the nation to see them savaging a well-qualified female nominee like Amy Coney Barrett just before the midterms. That would make it far more difficult to maintain the risible fiction that they are dedicated to protecting women from GOP villains who wish to keep them barefoot and pregnant. The Democrats want a piñata at which they can flail away during the confirmation hearings, and bookish white guys are better for that purpose than women.

Consequently, they have launched well-organized and well-funded attacks on Judge Barrett in the hope that her “controversial” views will scare the White House into erasing her name from the list of potential nominees. How controversial are her views? According to an article published in 2013, when she was a law professor at Notre Dame University, Barrett led a lecture exploring the consequences of American abortion jurisprudence and “the debate over the Supreme Court’s ‘institutional capacity’ to resolve divisive questions like the legality of abortion.” During that lecture, she expressed two ideas considered heretical by orthodox feminists:

Barrett spoke both to her own conviction that life begins at conception and to the “high price of pregnancy” and “burdens of parenthood” that especially confront women before she asked her audience whether the clash of convictions inherent in the abortion debate is better resolved democratically.

The first, and most egregious of Barrett’s heretical utterances, involved her belief that life begins at conception. This flies in the face of feminist dogma, despite public polls showing that most Americans agree with her. A recent Marist survey found that 62 percent of the public believes that life begins at conception or during the first three months of pregnancy. Barrett’s second heresy was the question concerning whether the abortion debate is better resolved democratically than in the federal courts. This implies that the Supreme Court may have been out of its depth on Roe v. Wade. Such questions have also been declared verboten by the feminist mob.

Never mind that, during the same lecture, Barrett indicated that it was “very unlikely” the court will ever overturn Roe; statements such as those quoted have caused her to be declared anathema by orthodox feminists, the abortion industry, the “news” media, and the Democratic Party. And, even if her heretical views on abortion weren’t enough to disqualify her in their eyes for the Supreme Court, her thought crimes with regard to Obamacare would certainly disqualify her. In 2017, for example, she wrote that Chief Justice John Roberts’ ruling in NFIB v. Sebelius was an exercise in creative writing whose sole purpose was to save the “Affordable Care Act”:

Chief Justice Roberts pushed the Affordable Care Act beyond its plausible meaning to save the statute. He construed the penalty imposed on those without health insurance as a tax, which permitted him to sustain the statute as a valid exercise of the taxing power; had he treated the payment as the statute did — as a penalty — he would have had to invalidate the statute as lying beyond Congress’s commerce power.

For those who have forgotten, the text of the “Affordable Care Act” justified the individual mandate by asserting that it was a legitimate exercise of congressional power pursuant to the Constitution’s Commerce clause. The same argument was used by the Obama administration lawyers who defended the mandate in 2012. Unfortunately five of the nine justices (including Roberts himself) failed to buy that strained argument. Roberts, however, decided that his job was to save Obamacare rather than evaluate its constitutionality. Consequently, he ignored the text of the law, the claims of its authors, and even the assertions of the President — by calling it a tax.

This relates to the nomination of Amy Coney Barrett because the Supreme Court may well end up reviewing this question again pursuant to Texas v. United States, the lawsuit filed by 20 states that once again challenges the constitutionality of Obamacare. Ironically, the suit is based on the perverse 2012 ruling by Chief Justice Roberts in NFIB v. Sebelius. He insisted that the individual mandate was constitutional because its penalty was, for all intents and purposes, a tax collected by the IRS to raise revenue. The plaintiffs argue that this “saving construction” evaporated when Congress reduced the penalty to zero. Their complaint puts it thus:

The Patient Protection and Affordable Care Act… as recently amended, forces an unconstitutional and irrational regime onto the States and their citizens. Because this recent amendment renders legally impossible the Supreme Court’s prior saving construction of the Affordable Care Act’s core provision — the individual mandate — the Court should hold that the ACA is unlawful and enjoin its operation.

The Trump administration enraged Obamacare apologists everywhere by its refusal to defend the health care law against the suit. Obamacare advocates claimed that the failure to fight Texas v. United States was an unprecedented dereliction of duty by the Department of Justice (DOJ). This was, of course, hysterical nonsense. The Trump DOJ was by no means obligated to defend a law deemed unconstitutional by the President, as Attorney General Sessions succinctly explained in his notification letter to Congress. Now, a group of seventeen states have taken up the mantle of defending the law, but their arguments are a rehash of those which failed in 2012. And, fortunately, not even Chief Justice Roberts will be able to maintain his former claim that the mandate acts as a tax.

The case is being heard by U.S. District Judge Reed O’Connor, who is almost certainly going to rule in favor of the plaintiffs. Then, it will go to an appeals court widely regarded as “conservative,” so its final stop will probably be the Supreme Court. By that time, Amy Coney Barrett will be sitting in Justice Kennedy’s seat on the Court, assuming she is nominated and confirmed. As a Supreme Court Justice, she will obviously be unsympathetic to arguments to which she has already taken a well-honed ax. In that respect, her response will resemble Justice Kennedy’s 2012 reaction to Roberts’ surreal ruling. She will be even less amenable to the other top Democratic priority — abortion on demand. But she can’t single-handedly overturn Roe v. Wade as her critics absurdly insinuate.

President Trump would be wise to ignore the preemptive Borking to which Judge Barrett is being subjected and nominate her to replace Justice Kennedy this afternoon. This will force the Democrats to publicly slander a well-qualified female nominee just before the midterms, when many voters are deciding how to vote. And it will also force Democratic Senators like Joe Manchin, Joe Donnelly, and Heidi Heitkamp to support her confirmation in an effort to save their Senate seats. Amy Coney Barrett will be the justice that keeps on giving.