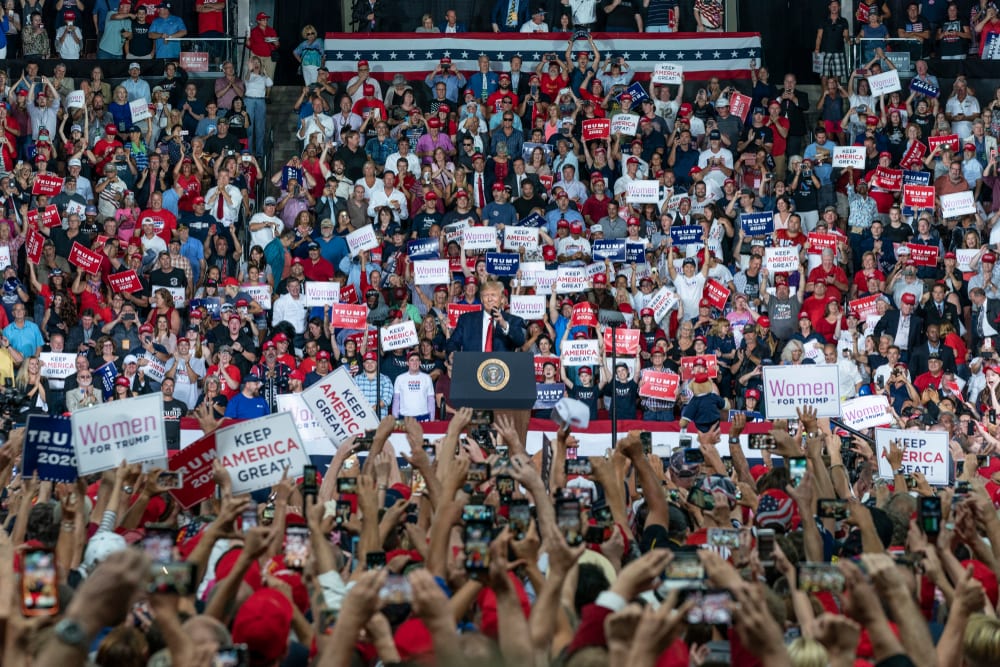 Glenn Reynolds of Instapundit fame says about climate change, “I’ll believe it’s a crisis when the people who tell me it’s a crisis start acting like it’s a crisis.” He means, of course, that when all those lecturing Americans about the end of the world give up their three yachts, two private jets, four 20,000-square-foot air-conditioned homes, then he’ll believe they believe their own bull about climate change. They don’t believe it’s that bad, which is why they live like Russian oligarchs. Why should anyone listen to them or subject themselves to rules they themselves ignore?

Using this same reasoning, Republican voters will believe there’s a corruption crisis deserving of impeachment when the people who tell them it’s a crisis start acting like it’s a crisis. The media, Democrats, and anti-Trumpers have been caterwauling for three years about President Trump violating norms, abusing power, bullying (and now bribing! Gasp!) governments, and generally using the power of the executive branch to act like he’s been crowned king. Whether this is true or not is up for debate.

Trump haters are confounded by Trump supporters. They ask, “If you believe it’s true that Trump does sketchy things, why don’t you care?” They ask the same question about the climate: “You concede that the climate is changing, so why won’t you do something about it?”

The answer: You first.

In the case of climate change, the religionists would recruit more adherents if they weren’t so utterly hypocritical in their lives. Maybe people would start cycling and driving a Prius. Likewise, the new converts to constrained executive power, adherence to norms, and a president who isn’t hostile to half of America would be taken more seriously if they ever took corruption seriously in the past. They didn’t. So current Republicans shrug with President Trump.

Here’s a smattering of what didn’t bother the corruption biddies with Obama: A daily, often illegal, executive order. Obama pompously threatened and humiliated the Supreme Court to their faces during the State of the Union. Anyone who disagreed with him was accused of racism. He called people who didn’t vote for him “bitter clingers” and “tea baggers.” Narcissism? He carried around a selfie stick and slow-jammed the news like a teenager. Foreign policy? He gave guns to Mexican drug cartels and pallets of money to the leading worldwide sponsor of terror. He started inane wars and ignored red lines. He used the power of the FBI, DOJ, and State Department to help his party surveil the leading candidate for the opposing party. And then, his minions in all parts of the government, continued their sanctioned behavior to unseat the duly elected president. Obama’s administration got rich while serving — both his secretary of state and vice president used their power for personal gain. His OMB revealed every person who worked in government to the Chinese, which resulted in murdered spies. Ambassadors weren’t pestered on Twitter; they were left to die. And then, innocent civilians were blamed for videos and imprisoned. What? Nothing? How about the active bugging of journalists’ homes, computers, and their parents’ homes? Still nothing?

And where was the media? Where were the righteous government workers and whistleblowers appalled at the president’s behavior? There were some. They were just fired, prosecuted, or imprisoned. Where was the investigation by Congress into the abuses of power and corruption? Nowhere. In fact, these same folks will, with a straight face, say that the Obama administration was “scandal-free.” Of course it was. Everyone was in on the scandal. The media actively covered for President Obama and still do.

Just this past week, the AFP published a story about all the kids locked in cages. Over 100,000! All the major news agencies picked it up. And then it was discovered that the story, a hit piece ostensibly on President Trump, was describing conditions at the border in 2015. Those poor, poor children were locked up by President Precious. Mustn’t hurt the precious. So, they didn’t correct the story. AFP deleted it. And so did everyone else.

Where were the talking heads intoning about the inhumanity? Suddenly very, very quiet.

President Obama was a divisive, corrupt, childish, narcissistic president, and there was no investigation. No digging for evidence. No 99 percent negative press coverage. A no-talent do-nothing community organizer with zero skills and a scant résumé made it into the Oval Office and was fawned over for eight years.

It wasn’t just his own party or the media. So-called conservatives like David Brooks liked the crease in Obama’s pants. Peggy Noonan praised him. The standard-bearers of conservative commentary carefully criticized him, if they did at all, lest they be accused of racism.

President Trump is a terrible Republican. It’s true. Unlike most Republicans, he keeps his campaign promises. He reduced taxes. He attempted to get rid of Obamacare with Congress and did everything he could do by executive order when the GOP couldn’t get its act together. He reduced illegal immigration. His administration is rounding up pedophiles around the world. He made an environment safe for jobs by reducing regulation. He’s minimized American involvement in conflict. He’s sought to end needless interventions. He’s armed friends (Ukraine, Poland, Israel) and restrained enemies. He’s stopped playing games with the Palestinians and cut off aid. He moved the American embassy to Jerusalem. He removed America from the idiotic Paris Accords and the even dumber Iran Deal. Against an entitled bureaucratic morass, he has attempted to fulfill the wishes of his constituents, and in the process the economy has soared and families and businesses are thriving.

And Trump fights. That’s the main way he’s not Republican. He doesn’t cower in fear in front of a ravenous media. He raves back.

No one is used to this behavior from a Republican. Trump acts like a Democrat — keeping promises and pushing forward. To be a good Republican is to know his place: quavering, unsure of his convictions, fearful of being called racist, sexist, homophobic, and generally evil (so a normal Republican acts: as Democrat as possible in an attempt to be loved — it never works). Trump refuses to play that game. He doesn’t care if he’s loved by the “haters and losers.” He wants to get things done.

Republican voters, so used to being maligned, are loving winning. They know that the media, Democrats, and anti-Trumpers don’t care about corruption. Not really. Because if they did, the Obama administration would have been under constant scrutiny. It wasn’t. Every bad decision and bad action wasn’t just ignored; it was often cheered. The results were disastrous to the economy, to families, to foreign enterprises. No one seemed to care then.

Like the climate activist jetting around and lecturing everyone, the newfound D.C. concern about corruption, overreach, violated norms, and general political nastiness is self-serving. Those who spent the Obama years lecturing their lessers and now decry being insulted might consider looking inward. But they’re not. They’re excusing the Bidens’ and Clintons’ trading favors, enriching themselves, and being utterly corrupt.

Why should any American voter, never mind a Republican, pay one bit of attention to the impeachment fiasco and take it seriously? As more “facts” come out, the narrative helps Trump. One bureaucrat after another dislikes him, his style, his decisions. D.C. screams, “Corruption!”

Republicans’ response to this newfound concern? If you want to clean up the political climate, how about you start with your own house?