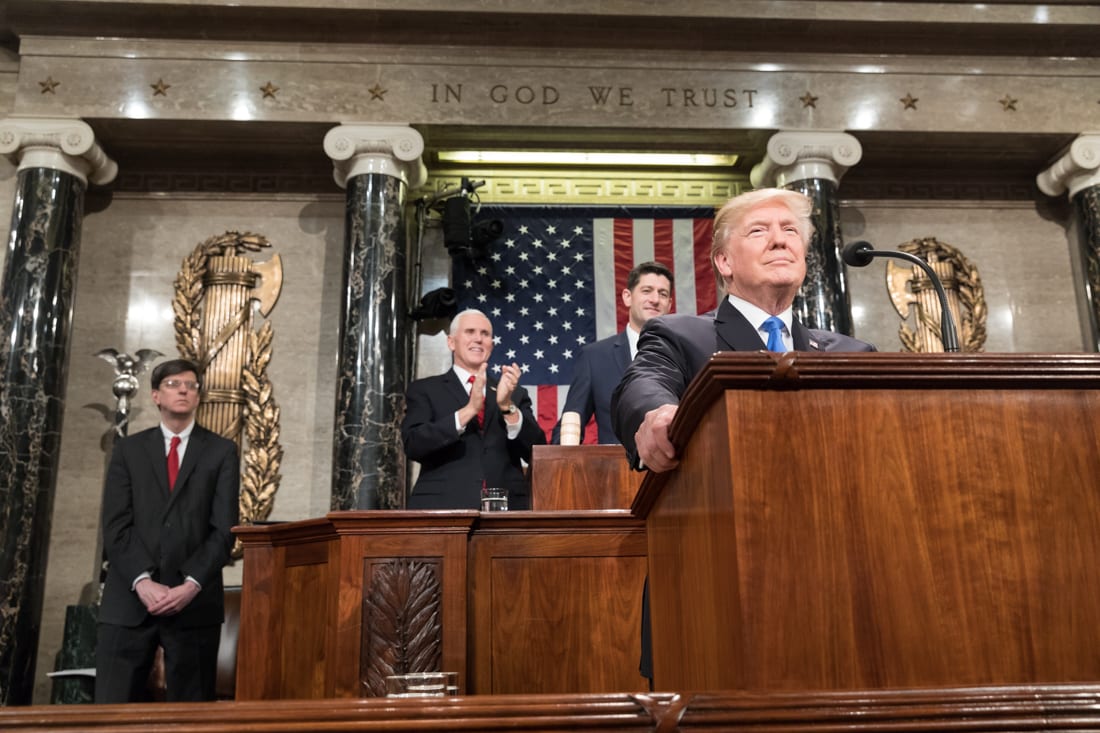 President Trump’s first State of the Union contained a lot of talk about “terrorism,” ISIS, and Guantanamo Bay, but not a word about radical Islamism.

The discrepancy suggests there is some uncertainty, even within the Trump administration, about how much to emphasize ideology and how best to beat radical Islamists in the war of ideas.

It cannot be seriously denied that radical interpretations of Islam have driven America’s most pressing adversaries in recent years. From Al-Qaeda to Iran’s Islamic Republic and the Muslim Brotherhood (which explicitly declared America an enemy in January), Islamists see the fight with America and the West in ideological terms. Democracy is the enemy, Islamic theocracy in some form or another is the goal. Before his death, Osama bin Laden explicitly stated that his goal was to remove America from a position of leadership in the world.

Yet for the past 30 years, the ideological dimension of conflict between America and its rivals has been treated tepidly by policymakers.

This wasn’t always the case. Ronald Reagan built his political career on challenging communist ideology with the ideal of liberty. Communism, he said in his 1986 State of the Union address, “openly proclaims and practices an alleged right to command people’s lives and to export its ideology by force.” His 1987 National Security Strategy made clear that “Marxist-Leninist ideology” was among the “principle threats to U.S. interests” and was rife with discussion of the underlying ideological struggle, citing “fundamental differences in… beliefs” between America and its communist rivals.

But as the Cold War waned, so did America’s focus on the ideological dimension of conflict. By 1990, the first Bush administration was describing communism as a threat that was in the process of unraveling. By 1994, the Clinton administration was referring to communism as a relic of the past. Radical Islam was not yet seen as a serious problem.After 9/11, many in Washington appreciated that Islamism was a serious problem. However, fearing that challenging an ideology so closely entwined with the Islamic faith risked alienating the broader Muslim community at home and abroad, the second Bush administration cast the fight against Al-Qaeda and other violent jihadist groups as a “war on terror.” Ideology was discounted as a primary motivation off the “terrorists.”

The Obama administration doubled down on the view that radical Islam was not a problem worth mentioning if it offended anyone, going so far as to purge FBI training materials that might be disagreeable to some Muslims, such as those discussing jihad. In point of fact, it is demonstrably untrue that Muslims don’t share our concerns about radicals within their midst. Indeed, Muslims recognize the ideological conflict within Islam more than most. For example, Maajid Nawaz, a former radical who spent 6 years in prison, now works full-time to counter radical interpretations of Islam. Even President Abdel Fattah el-Sisi of Egypt has called out extremist clerics in his own country for preaching radical versions of Islam. As Daniel Pipes puts it, “radical Islam is the problem, moderate Islam is the solution.”

Trump subsequently became the first American president to recognize radical Islam as a paramount national security threat, though he has failed at times to emphasize meaningful distinctions between moderate Muslims and radicals.

It’s not entirely clear why he did not name this threat Tuesday night. Perhaps he felt it would be too divisive for the occasion. But it’s the longer trajectory of an administration that matters most, and on the whole this one has made a great start recognizing and working to combat the radical Islamism as an ideology.

But please, President Trump, ignore the Washington Post, stay on message, and continue to challenge the Islamist ideology.