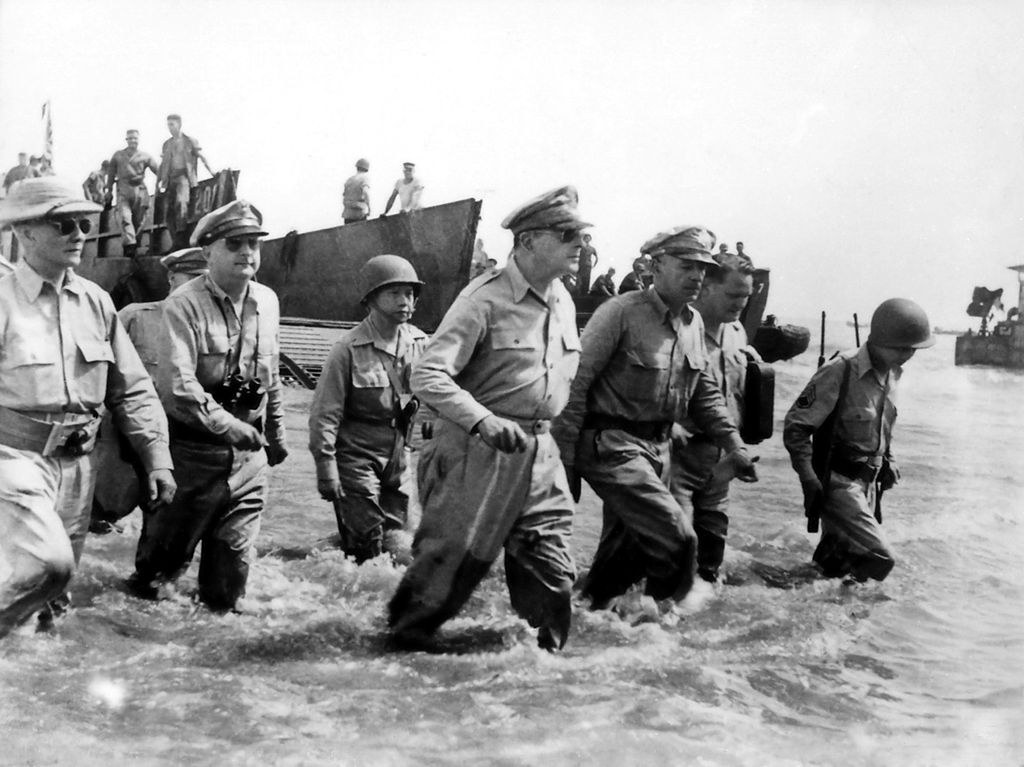 There is serious talk of war in the South China Sea, as Chinese air incursions into Taiwan’s air defense space increase and the rhetoric of war becomes all too commonplace. What political scientist Graham Allison called the “Thucydides Trap” (war produced by a rising power’s challenge to the current leading power) may have been tripped. It may once again be a time when America needs great generals and admirals.

We are approaching the anniversary of General Douglas MacArthur’s landing at Leyte Gulf to begin the liberation of the Philippines in World War II. It was the fulfillment of the famous promise MacArthur made (“I shall return”) after being ordered by President Roosevelt to leave his Philippine command and travel to Australia to establish his Southwest Pacific headquarters. The moment he landed at Leyte was captured in one of the most iconic photographs of the war showing MacArthur wading knee-deep in water with a stern, defiant, commanding look on his face.

It was the afternoon of October 20, 1944, more than two and a half years after MacArthur left the island of Corregidor. MacArthur after landing on Leyte immediately called upon Filipinos to “rally” to him, and to “rise and strike” for their families and homeland, knowing that a substantial Filipino resistance had been battling the brutal Japanese occupation for more than two years. “Let every arm be steeled,” the general urged, “the guidance of divine God points the way. Follow in His name to the Holy Grail of righteous victory.”

A month earlier, MacArthur had landed on the island of Morotai, which is located about 300 miles south of the southernmost Philippine island of Mindanao. Looking to the north in the direction of the Philippines, MacArthur told an aide: “They are waiting for me there. It has been a long time.”

Filipinos, American soldiers who had joined and in some cases led guerrilla forces on several Philippine islands, and American and Filipino POWs were in fact waiting for MacArthur. In his new book about the Filipino resistance in World War II, author James Kelly Morningstar quotes one American guerrilla leader: “Filipinos asked one question: When would MacArthur return? His name was like an invocation to them, a holy word that had special power and meaning. None of them doubted his promise to return, but they were anxious to learn when the invasion would come.”

MacArthur had to fight the U.S. Navy and the Chiefs of Staff to get authorization from FDR to liberate the Philippines. The navy and the chiefs wanted to bypass the Philippines and instead invade Formosa (Taiwan). MacArthur at a meeting in Hawaii appealed to FDR’s political instincts, warning the president that American voters would disapprove of abandoning American POWs and loyal Filipinos who were suffering greatly under Japanese rule. FDR relented, and the Philippine islands were liberated after brutal fighting, especially in Manila where more than 100,000 Filipino civilians were killed.

The landing at Leyte was just the latest instance of MacArthur’s courage and steely determination, both military and political. In World War I, where he commanded the Rainbow Division in France, MacArthur earned seven Silver Stars, two Distinguished Service Crosses, and two Croix de Guerre, for his bravery in leading troops. The citation for one of the Distinguished Service Crosses read: “On a field where courage was the rule, his courage was the dominant factor.” MacArthur’s fellow officers after the war presented him with a cigarette case engraved with the words: “Bravest of the Brave.” Then-Col. George Patton, whose tanks had supported one of MacArthur’s offensives, told his family that MacArthur was “the bravest man I ever met.”

After the war, MacArthur became superintendent at West Point where he brought the curricula into the 20th century. In 1930, President Hoover appointed MacArthur Army Chief of Staff. After FDR won the presidency and began resisting MacArthur’s proposed increases to the defense budget, MacArthur courageously confronted the president by telling him: “When we lose the next war, and an American boy, lying in the mud with an enemy bayonet through his belly and an enemy foot on his dying throat, spits out his last curse, I want the name to be Roosevelt, not MacArthur.” FDR scolded the general for talking to the president in that manner. MacArthur offered his resignation, but FDR responded: “Don’t be foolish, Douglas, you and the budget must get together on this.” FDR begrudgingly agreed to a modest increase for the army.

Arthur Herman, MacArthur’s most recent biographer, credits the general for doing what he could during the depths of the Great Depression to prepare the army for the next war. “He had built up the Army Reserves and the ROTC, as well as opened the General Staff College at Leavenworth to lieutenants. He also turned the Army War College into a lively place for serious thinking about tactics and strategy.” MacArthur also oversaw the production of the M-1 rifle, the B-17 bomber, and light and medium tanks. Herman concludes that MacArthur “saved the United States Army from dwindling to impotence, in a time when the majority of Americans didn’t think about their military, or care.”

In the months and years immediately preceding the landing at Leyte, MacArthur waged a brilliant land-sea-air campaign in the Southwest Pacific that liberated territory from Japanese control and did so at a relatively modest cost in lives. MacArthur biographer Mark Perry called it “the most successful air, land, and sea campaign in the history of warfare.” The island of New Guinea was liberated as MacArthur moved closer to the Philippines with every victory. In one three-month period, Herman writes, MacArthur’s forces moved 1400 miles and “opened up the Southwest Pacific from Finschhafen to the Moluccas.”

After the Philippines were liberated, MacArthur was tasked with planning and leading the anticipated invasion of Japan’s home islands. It would have been the greatest invasion in military history, but was rendered unnecessary by the dropping of two atomic bombs. On August 30, 1945, MacArthur arrived at Atsugi airfield virtually unprotected from assassination to begin his military administration of defeated Japan. Winston Churchill later called this the single most courageous act of the war by a general officer. MacArthur’s subsequent administration of Japan is even lauded by his most severe critics. He and his staff wrote a new constitution for Japan, saved millions of starving Japanese citizens, and oversaw Japan’s stunning transition from military despotism to liberal democracy. Arthur Herman writes that at this moment MacArthur was “the most powerful American in history.” He ruled over a country of 80 million people. He led six major military commands consisting of more than a million and a half soldiers. He was, in author Robert Harvey’s words, an American Shogun.

When war broke out once again on the Korean peninsula, MacArthur was chosen to lead U.S. and UN forces against the communists. He was 70 years old. He conceived the brilliantly successful Inchon landing of September 15, 1950, once again overcoming the doubts and opposition of the military hierarchy in Washington. When China massively intervened in the war in October-November 1950, MacArthur urged political leaders in Washington to allow him to achieve victory over Chinese forces. “In war,” MacArthur wrote, “there is no substitute for victory.” The Truman administration, which had basked in the general’s victory at Inchon and had authorized him to liberate all of North Korea from communist rule, now decided that Korea was the wrong war in the wrong place at the wrong time, and they blamed MacArthur for trying to start World War III. When MacArthur publicly noted his disagreement with a policy that sought stalemate instead of victory, he was relieved of command by President Truman. Liberal historians universally side with Truman in this dispute, but settling for stalemate meant continued misery and tyranny in North Korea, emboldened the Chinese Communist Party that today is our greatest geopolitical challenger, and set a precedent that helped lead to our subsequent defeat in Vietnam.

MacArthur was greeted as a hero when he returned to the United States. He delivered his famous “Old Soldier” speech in Congress — a speech where he also presciently envisioned the Asia-Pacific as the most important geopolitical region of the future. In 1962, he delivered a memorable address to the cadets of West Point, reminding them that their lodestar was “Duty, Honor, Country.”

Like all men — even great men — MacArthur had flaws. He could be vain, imperious, ignoble, and petty. But it is difficult to disagree with perhaps his greatest biographer William Manchester who in American Caesar called MacArthur the “greatest man at arms this nation has produced.”

Today, as we face a possible war with China over Taiwan, we may need more generals like MacArthur because “there is no substitute for victory.”