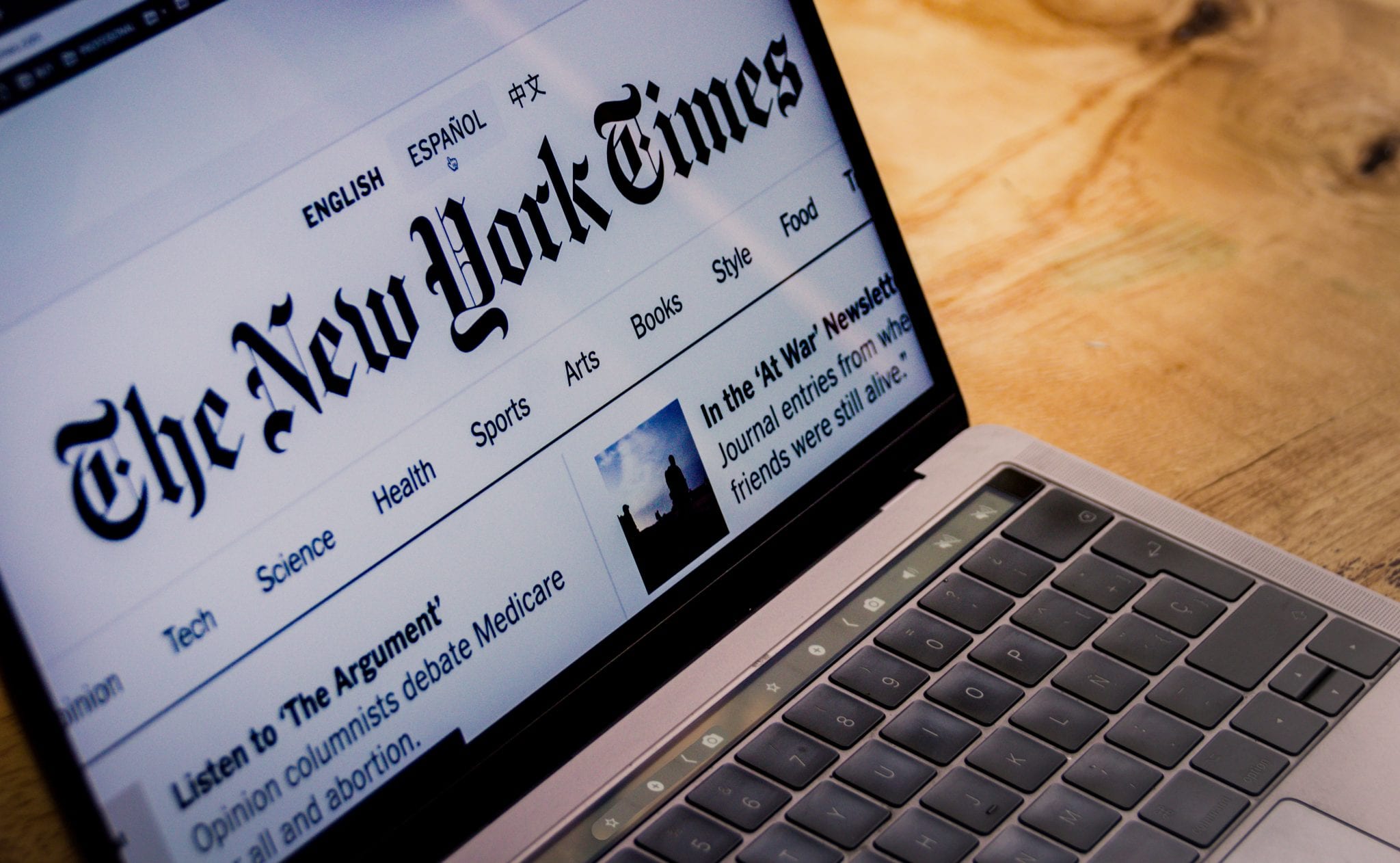 Sitting down to write, I ask myself: Am I being fair? Is it according to Hoyle, kosher, and on the up and up to take aim at such a target, cavorting unaware in the complacency of impervious consensus? After all, this is the A-section of the New York Times, where summer games for social justice warriors don’t end; they just continue on B17. Rebels and scofflaws are not just uninvited; they are not imagined.

And yet here I am on page A2. It has been redesigned since my last, non-virtual visit, the new architecture supporting a self-referential echo chamber of left-wing hang-ups and obsessions. The agitprop may be old news, but the look is different. Like industrial chic, all of the pipes and wires are just hanging out.

Even house ads are unbound. “The truth is worth it,” the first of two New York Times house ads states, black print on white background, from its center-left position just under an ad for proletarian if pricey ($825) rain boots. The truth is worth what? The $3 price of the paper? Or perhaps the indoctrination required to get at what the Times defines as “truth”?

No doubt Times focus groups simply dug the labels “now” and “NEXT,” but, judging by the listings on the right side of the page (under the millennial-pitched heading “THE NEWSPAPER AND BEYOND”), the paper is stuck and not going anywhere.

First, there is a link to a video of tent-courtrooms for “migrant” asylum claims on the southern border (“A new video from The Times explains … ”). Next, there is an audio link to a “Popcast” about Taylor Swift’s new album (“New York Times music journalists break down the … messages”). Then there’s something called “Reader Callout.”

This item is a solicitation for reader input: “If you work in the farming industry, the New York Times wants to hear how President Trump’s trade dispute with China has affected you. We may print a selection of the responses” — if, that is, the responses are bad news for President Trump.

News, facts, old-fashioned reporting have no place of primacy here.  It’s all about Times personnel “explaining,” “breaking down,” and creating “truth” for the paper’s readers.

Corrections, meanwhile, have been redesigned from a former place of prominence to A23.

I haven’t even gotten to the cavorting target, the centerpiece, literally, of the A2 page: an interview with a Times national editor, her Times-illustrated face a palette of newsprint grays except for Sharpie-black eyeglasses. The Q&A appears directly below the newly elevated Times masthead. A whirl of explanatory headlines and subheads frames the interview, each one taking a reader a little deeper into the realm of TimesMind.

“Inside the Times: THE STORY BEHIND THE STORY. A National Editor on Discussing Race. This article was adapted from In Her Words, a Times newsletter on women, gender and society. The interview has been lightly edited and condensed.”

So insider-y! So behind the story! I feel practically initiated already.

By way of introduction, an unnamed reporter writes:

Welcome to the third installment of our Elevator Interview — a summer series showcasing the voices of Times writers and editors, attempted to be conducted during the ride upstairs inside our very slow corporate elevators but actually usually taking place over email.

Seriously? Could this anonymous Times Voice “actually usually” understand his achievement? (I’ll bet it’s a “her,” but the point of grammar wins, especially when it’s also an SJW trigger.) In just one sentence, anonymous Times Voice has reached a pinnacle of self-referential echo-chamberdom, grinding the duh-ironical aspect of the “Elevator Interview” to its nub, reflexively spinning “very slow” elevators into “corporate” elevators, and “contextualizing” all in the reverse voyeurism of journalistic narcissism.

What could top that? How about the interview subject herself?

Times Voice continues, “This week we caught up with Lauretta Charlton, an editor on the National desk who oversees the Race/Related newsletter, which focuses on race, identity and culture.”

Some readers, Charlton explains, presumably as the elevator begins its slow, corporate climb, tell her that there is only one race, and it’s the human race. She continues,

But what they are suggesting is that everything would be harmonious and peaceful if we were to ignore the violent history of white supremacy and the global issues of anti-blackness and colorism. But when we ignore violence and injustice, they don’t go away. When we ignore racism, it doesn’t go away. The newsletter is a small but healthy and necessary reminder of this. It is also a place to celebrate diversity and collaboration. Being the Race/Related editor means many things to me. I consider it a huge responsibility with very little margin for error.  Ultimately, my job is about spreading awareness, both inside and outside the newsroom, about how race affects our lives.

Out, please. What Charlton “oversees” inside and outside the newsroom, is ideological purity. Her fixation on Western civilization as a “violent history of white supremacy,” “anti-blackness,” and “colorism” locks her into a perspective that is thoroughly ill-suited to edit “news,” but just right for enforcing “healthy and necessary” narrative. When she talks of her “very little margin for error,” it’s highly unlikely she has fact-gathering in mind. What probably concerns her is what she calls “working toward a better future.” That ain’t making deadline.

“Issues of anti-blackness and colorism.” “Celebrate diversity.” “We should be more inclusive of marginalized voices and perspectives.” If the clichéd sloganeering of Marxist thought-control stands out, Charlton offers a chilling note of explanation about the role of “mantras” in her intellectual armature. The question goes to how she combats self-doubt or adversity. Charlton replies, “I used to be a big fan of mantras, which is a tool I used practicing yoga. I still repeat mantras,” she says. Now, she adds, she focuses “on what I can do to improve my performance and be better at accepting challenges.”

So much for an elevator ride in the life of a New York Times race editor. Nevertheless, as the institutional and corporate voice of the Times puts it, “The truth is worth it.”