Special Report,Top Story Election,Georgia,Voting Who Won? - The American Spectator | USA News and Politics
Menu
Special Report
Who Won?
Democrats will only take Biden for an answer — and they’re already doing everything it takes to find the votes they need.

Who won the United States presidential election as of 8 a.m. Eastern Time on November 4? The answer is not known yet. Democrats are looking for votes in Wisconsin, Nevada, Georgia, Michigan, and Pennsylvania.

Here’s what I wrote to our subscribers two days ago:

My prognosticator friend said this: “White people vote when they’re scared and they’re scared.” My immediate question: Scared of what?

Are Americans, specifically white American women, more scared of Covid or more scared of marauding Antifa communists (rich suburban white teenagers, likely their kids or grandkids) taking over the country? Depending on how they answer, will determine the outcome of the election. Our formerly anti-Trump libertarian, Ross Kaminisky is voting Trump.

Fear the Karens that Fear the Covid

There are theoretical threats (the world will end due to environmental collapse!!!) and then there’s the real risks: bullets whizzing past heads, destroyed cities, boarded up communities, ruined businesses, closed schools. Real risks tend to focus the mind.

For too many, Covid is a real risk. Without Covid, Trump would win in a walk. But the President’s bumbling communication, mixed messages, and a terrified populace due to the irresponsible press create a perfect storm of uncertainty around the President’s electoral chances.

I’ve never seen expectations so totally skewed. I saw a Democrat tweet out a map that Biden gets over 400 electoral votes. That’s patently absurd. I’ve seen MAGA zealots promise a red Tsunami. I think they’re both wrong. Why?

Some of the polling is clearly garbage. There is no way that Biden is up 17 in Minnesota, for example. In 2016, I got the impression that the pollsters were trying to discourage GOP voters. The media is certainly all in on Biden this cycle. Are the pollsters, too? They get paid no matter how accurate they are. 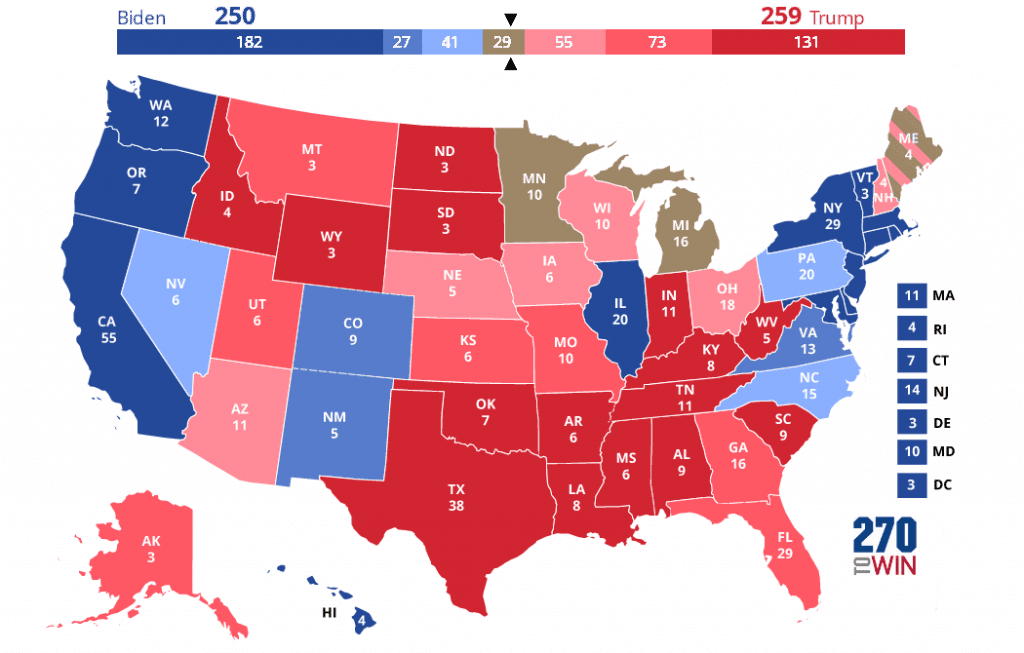 Click the map to create your own at 270toWin.com.

Here’s my state breakdown for what it’s worth (which isn’t much). Here are the swing states Trump wins:

Here are the question marks:

After listing all this, you might be wondering why I’m not more optimistic about a Trump win. The reasons are twofold. First, it cannot be overstated just how much Trump is hated by at least half the country. The Democrats are running an incoherent animatronic facsimile of a human and he’s polling ahead of Trump by hiding and then spewing word salad every time he speaks. When I talk to Biden voters they are filled with primal loathing of Trump. Joe Biden isn’t even part of the equation. The media has done its job and poisoned them into mind-blinding rage against a person they find evil. Second, fraud. The Democrats are very, very good at finding votes (they have a long history of it) and then using the legal process to gum up the works and fatigue the Republicans. Currently, Dems have 600 attorneys on call to dispute voting. How many do the Republicans have? As Texas has already proven, the GOP is woefully inept at dealing with these threats. It will be a factor in favor of Democrats across the nation. [Emphasis added today.]

Whatever the result of this election, I’m concerned about this next generation and the women that spawn them and the educators who teach them. Our children are idiots. Oh, they know things but the things they know don’t matter. Who cares about calculus if you don’t understand basic civics? Who cares about AP tests in English when all you’ve read is social justice warrior garbage? Our children have been filled to the brim with Marxist nonsense. These new voters are the product of No Child Left Behind, broken families, no church, and a media wholly bent on them hating America.

If America ekes out a Trump victory tomorrow (or more likely in December), there’s still the future to deal with.

First, a general statement: Vote counting halted in the middle of the night in places where Donald Trump was winning. Never before have there been so many tired Democrats in so many Democrat cities. What were they doing? Why, counting votes, of course. They were counting how many votes they had … and counting how many votes they needed to win. They needed time to “find” those votes. Vote counting halted in Pittsburgh and Philadelphia, Atlanta, Detroit, and Milwaukee. To use a word that’s overused: unprecedented. They’re getting back at it not at 7 a.m. or 8 a.m. but 10 a.m. or 11 a.m., and the vote tallying might not be finished until the end of the week.

In Pennsylvania, even unstamped votes will be counted. The Supreme Court, led by John Roberts, created a mess when he decided to not decide this case. There will be a mish-mash of votes in Pennsylvania. There will be no way to confirm a legitimate vote. And that’s the point. George Parry warned The American Spectator readers. He was, and is, right. Read about Pennsylvania’s ballot stealing and harvesting.

The Democrats’ electioneering, ballot harvesting fraud, changing votes, and generally running amok in Blue precincts happens in nearly every precinct nationwide and in every election. Republicans must reckon with this as it is undermining democracy. Republicans are woefully inefficient at blocking this nonsense. There are videos, images, social media posts documenting fraud, intimidation, and electioneering all over the country. What will the GOP do about it?

Second, the polls were terribly wrong but did their effective work: enthusing Democrats, buoying them, and getting them excited to vote. Never before have the media and pollsters been so coordinated in creating a mood for the country. Trump, with his energetic barnstorming, counteracted some of that. The exuberance and attendance at these rallies let Republican voters that they were not alone and that their votes did matter. If someone watched only NBC, Fox, CNN, CBS, ABC, etc., they could be forgiven for believing that the election was going to be a blowout and that everyone hated Trump. The final voting tally proves that Trump’s support is stable, loyal, and turns out. That was not reflected in the polls.

Third, COVID killed Trump’s chances. Without this hideous disease, it wouldn’t have been close. The shutdown economy, scared old people, scared suburban women, out-of-work everyone pushed otherwise solid Trump voters into Biden’s creepy arms. It’s not that Biden will do anything different or bring back jobs or any such thing. He’ll just make people feel better about their suffering.

Finally, Go Woke, Go Broke. Democrats have to reckon with the idea that even minorities hate the woke crap.  In California, voters rejected affirmative action in state employment and college admissions. This messaging is just annoying everyone, including Californians.

Now on to some state-by-state analysis.

Clearly, I was wrong about a lot of things. Let’s start:

Arizona: A Democrat friend in Arizona warned me on Monday that Arizona would likely fall because McSally was running so terribly there. He said that she would pull Trump down, and that would give the Democrats Arizona. Looks like he was right. McSally was a terrible candidate, and the Arizona GOP needs to do a real gut check, or else Arizona will go the way of other California-infected states and forever be Democrat. I was kinda wrong.

Georgia: The GOP needs to do even more work in black communities. Atlanta has a great minority community filled with middle-class and working-class black people. These voters are giving Democrats a cushion here, but they’re conservative in their values: God, family, work. They should be Republicans. I didn’t expect Georgia to go Biden.

Minnesota: The GOP had no chance. Even destroying Minneapolis didn’t swing the state. I was totally wrong. But the pollsters were really wrong.

Wisconsin and Michigan: These two states, with the current GOP coalition, are becoming swing states again. Pollsters were laughably off in both states. The states are different in quality and temperament. Michigan has a union/communal streak, which would make a Bernie Sanders more appealing there. Of course, the further left the Democrats go, the more trouble they have other places. So the Democrats have a tough time, too. Ultimately, I think enough votes will be “found” that both fall for Trump. I’d be looking at the big-city votes there, though. Closely.

New Hampshire: I was wrong. I hate this state. It has little to recommend it outside natural beauty.

Nevada: I trust Harry Reid’s machine. I would be shocked if it somehow goes GOP.

What about the future?

The task before the GOP is to more directly engage with the culture. The American public needs to get back to church, get married, embrace adulthood. Education cannot be a nonstop Marxist indoctrination. It’s turned too many people against truth, justice, and the American Way. The Left owns every institution, from the bureaucracy to education to entertainment to technology. That has to change.

The task before the Democrats is to not fall off the woke, fringe-y cliff. If they do, rather than engaging with real concerns, like jobs, they’ll lose the working class.

On a bright note, the GOP is more diverse, more populist, more socially conservative. It supports Israel. It fights tyranny. It doesn’t start stupid wars. It hates socialism. I couldn’t be prouder to call the GOP my home.