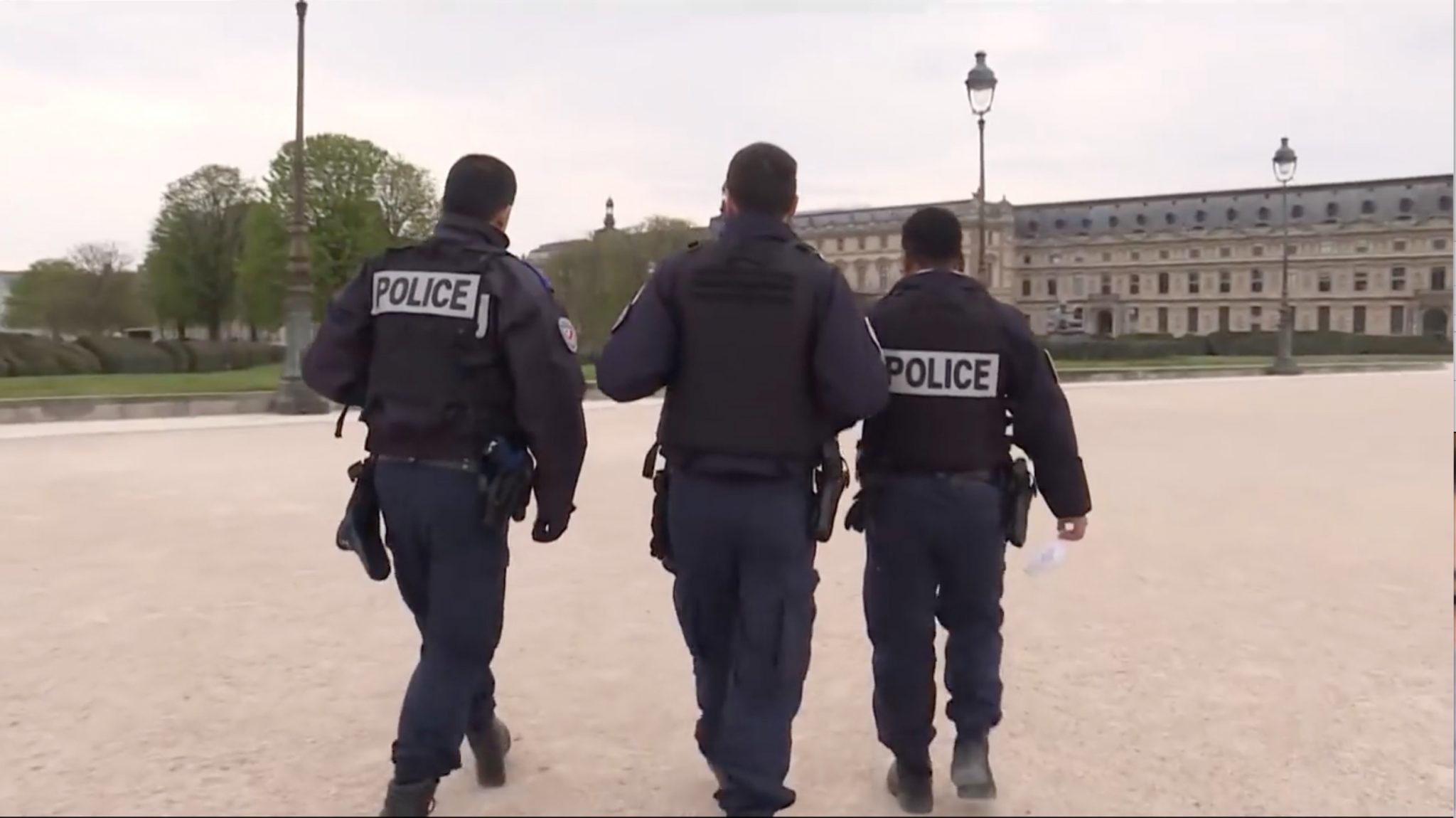 Ausweis in pocket, I head out for my morning constitutional on Avenue de Breteuil, a spacious esplanade lined with double rows of plane trees leading to the monumental golden dome of Les Invalides and Napoleon’s tomb. A police car cruises by, stops, and disgorges several officers. One comes up to me with that sauntering cop-walk. I half-expect him to demand in guttural tones, Achtung, ausweis bitte! But no, he is not requesting the pass required of Paris residents under Nazi occupation.

What he wants is my Attestation de déplacement, duly signed and dated, giving my name, date and place of birth, home address, time of leaving my residence, and reason for doing so. “Where are you going?” he asks politely. Showing him the form, I explain that I am walking for exercise as prescribed by my cardiologist. “Please return to your apartment,” he says in a tone not inviting any backchat. I point out that exercise is one of the seven acceptable motives for being outside mentioned on the form. But to his mind, jogging is exercise, not walking. (Perversely, it would be okay if I were accompanied by a dog.) I know when I’ve lost an argument with a cop. I trudge back home, reflecting that this must be what it’s like in a police state.

France in confinement isn’t a police state, of course. I was in no danger of being packed off to a concentration camp. The worst that could happen would be a stiff fine of 135 euros, about $150. But even during the darkest days of World War II occupation, the Nazis didn’t forbid walking in the street. Nor did they ban going to work or bring the whole economy to a standstill. So the French are finding lockdown due to a viral enemy almost as stressful as occupation by a jackbooted army.

Thus the first thing many did when it became clear that lockdown was coming was, as in the great exodus of 1940 with German tanks speeding toward Paris, pack up and leave. In mid-March, Panicked Parisians swamped train stations or took to the A6 autoroute south to get to country homes or drop in on relatives in the provinces for extended stays. Some estimates run as high as 15 percent of the city’s population that fled. (Provincials were less than pleased by the influx of visitors from the capital, fearing they would bring the virus; cars bearing the telltale “75” of Paris on their license plates often had their tires slashed.)

As in 1940, when the inept governments of the crumbling Third Republic misled and confused the French about the real danger of invasion, Emmanuel Macron’s administration — caught unawares like many others — has vacillated and confused the public with contradictory declarations. France’s health-care system was the best in the world, we were assured in February, and all would be well. Besides, the vast majority of those infected would be just fine. Unless, maybe, they were elderly, in which case they were done for. Oh, and the young were at risk too. The vaunted health-care system was quickly overwhelmed, with protective masks and ventilators in disastrously short supply. The government is pinning its hopes on Chinese largess to save the situation. It has set up a weeks-long airlift from Beijing to supply billions of masks.

Were cinemas, theaters, restaurants, and cafés, the lifeblood of Paris social life, safe? That was unclear for weeks until suddenly they were to be shuttered and shunned. France’s 8,000 street markets, where crowds of housewives jostle for a vast assortment of viands, were deemed important enough to be left open — until unexpectedly they were counter-deemed not so important and were closed. The confinement itself was to be for only two weeks. Then the government admitted what everyone suspected: that it would run through the whole month of April, maybe longer. Now no public pronouncement about the virus is taken at face value.

Confusion peaked over the nationwide municipal elections to be held on March 15. Experts advised against gatherings of 10 persons or more, so they couldn’t be held safely. They must be held, went the official line; nothing less than democracy itself was at stake. And held they were — with a record abstention rate of 55 percent due to the frightened absence of older, usually more conservative, voters. That skewed the results toward the youth vote, with surprising wins by the ecologists. Now there is a torrent of demands by those who lost to nullify the results and hold a new ballot.

Just as the Occupation often brought out the worst in the French, with scammers skimming profits from the black market and many settling accounts by denouncing neighbors to the Gestapo, today’s hard times are exposing some ugly latent traits.

Police and gendarmes attempting to enforce the lockdown in the seething Paris suburbs are attacked with rocks, and roman candles are fired at them. Tens of thousands of masks have disappeared from hospitals; by one estimate some 20 percent of their supply has been stolen and sold on the black market for many times their value. Doctors and nurses have their cars broken into in the search for masks or other protective gear. They are threatened and told to go live elsewhere by craven neighbors who fear they bear the virus. Some things never change.

Some things will be changed for good. The French habit of close-up contact is a prime example. When meeting, they stand closer than we Anglo-Saxons; in conversation I am constantly moving back to maintain my physical comfort zone, while my interlocutor keeps moving toward me — a sort of talking tango. Arriving at work, be it in an office or factory, they shake hands with everybody in sight (known, to the logical Gallic mind, as the shake-hand) for several minutes before doing anything else.

Often at work and on social occasions there is a cheek kiss — whether it’s twice as in Paris or three or more pecks in the provinces. Unwritten codes determine all this; failure to do it properly, and at the right time and place, can be a faux pas or even prima facie evidence of ill humor or perhaps a secret quarrel. There are almost as many slang names for kissing as for money: baiser, bise, bisou, bec, smack, for starters.

Imagine then the shock when the government, in the interest of social distancing, not only told the French to stay farther apart but also banned both the shake-hand and the bise. It puts considerable effort into promoting this wrenching change. There are leaflets, posters, and radio announcements several times a day reminding citizens they are not to shake hands or kiss. At the government’s bidding, companies still operating issue warnings to employees to back off and, above all, not to kiss.

Experts on etiquette and savoir-vivre explain at length that it’s not really impolite, after all, and there’s no reason to feel insulted if there’s no bise or other accolade. Strange as it may seem, they point out, people in other countries actually have different ways of greeting. Besides, explains one, “Shaking hands is a fairly recent habit. It only dates from the middle ages [sic].”

As the confinement goes on, there is as yet no agreement on what replaces such signs of camaraderie. Touching elbows or feet, fist bumps, and other such foreign barbarisms are not catching on. Still, there are hopeful signs that social distancing changes will be permanent, making it unnecessary for me to backpedal when I meet a French friend. Or to wonder, as a socially tone-deaf American, whether and how to buss or not to buss (see “To Tu or Not to Tu” in the October 2007 American Spectator). Some are beginning to admit they feel a pleasant deliverance from the burden of having to embrace, shake, and kiss on every occasion. “What a relief,” writes one frank commentator. “Exonerating us from the kissing chore, from feigning to like people we detest, is at least one good thing about the coronavirus.”

French joy may yet reign unconfined.