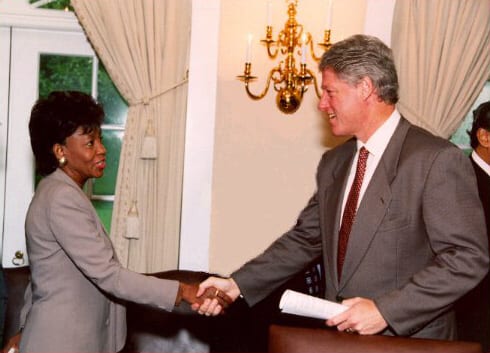 That was the headline in the July 9, 1992 edition of the Los Angeles Times. “Rep. Maxine Waters (D-Los Angeles) Wednesday branded President Bush ‘a racist’ who has ‘polarized the races in this country,’” reported the article. “Waters said she has pledged to support Bill Clinton’s presidential campaign partly because the soon-to-be-Democratic nominee ‘is much better on the race question’ than Bush.”

Waters blurted out that charge not after a few drinks at the Mayflower or a bad cup of coffee that put her in a disagreeable mood. She leveled it at the National Press Club during a two-hour panel discussion on African-American attitudes on politics. She said she wanted to say “very clearly that I believe George Bush is a racist. I believe he’s a racist for many, many reasons.”

The Times reporter noted that Waters’ gem was met with “wide-eyed stares” from the audience. Still, she was undeterred, adding emphatically that Bush “is a mean-spirited man who has no care or concern about what happens to the African-American community in this country. I truly believe that.”

This was, evidently, in contrast to Bill Clinton.

“George Bush and Bill Clinton are decidedly different,” explained Waters. “I sincerely believe that Bill Clinton really did attempt to get a civil rights bill passed in his state and could not get past his legislature.” She and fellow black voters thus would have little trouble picking Clinton for president over Bush.

It was a nasty charge. Did Maxine later apologize for it? No, she doubled down.

“Waters: No Apologies for Her Calling the President a Racist,” said the follow-up headline in the Los Angeles Times. The context was Vice President Dan Quayle’s defense of his boss against Waters’ smear. But Maxine was having none of it. The article reported:

Listen carefully, Rep. Maxine Waters (D-Los Angeles) advised Vice President Dan Quayle from afar on Saturday: There will be no apology for her calling President Bush a “racist.”

“Dan Quayle doesn’t know me,” Waters said at an appearance in Inglewood. “My mother couldn’t make me do that.”

Waters’ message — greeted with applause and loud whoops from a largely African-American crowd — came two days after Quayle demanded that Democratic presidential candidate Bill Clinton publicly apologize for the comment about Bush by the congresswoman. Waters serves as one of Clinton’s national campaign co-chairs.

Neither Quayle nor a spokesman for him could be reached for comment Saturday.

Waters set the stage for the hubbub early last month when she made the racist accusation against Bush at the National Press Club in Washington. Waters charged that the President “is a mean-spirited man who has no care or concern about what happens to the African-American community in this country.”

Quayle revived the issue on Thursday during a campaign stop in a small Ohio town, where he was asked about a recent personal attack on Clinton by one of Bush’s top campaign aides.

“If you want to talk about negative campaigning, look at what (Waters) said about George Bush,” Quayle said. “She called George Bush a racist… calling him a racist is totally unacceptable, and Bill Clinton ought to apologize.”

Nope. No apologies. None from Maxine, none from Bill Clinton, none from a single Democrat. George H. W. Bush — a lousy, stinky racist.

I mention this now, obviously, because liberals are upholding the late George H. W. Bush as a paragon of decency and civility in politics and the presidency, which he indeed was. But in truth, they didn’t treat Bush with decency or civility, nor his son, George W. Bush, nor his predecessor, Ronald Reagan, nor Richard Nixon or any of a long line of Republicans. They have long engaged in vicious name-calling and character assaults toward Republican opponents.

Of course, their extolling of Bush’s virtues has a hollow ring of insincerity, as their praise of Bush is no doubt intended to shed negative light on President Donald Trump. Bush is carefully hailed as a good man, and thus as the Anti-Trump. If only Donald Trump could be a gentleman, a kind man, a moral exemplar, like Bush.

Bush is canonized in death, as a momentary political saint for liberals, in order to further expose the current devil in the Oval Office. Saint George vs. Demon Donald.

And now, when they dub Donald Trump a racist, they express amazement that those blockheaded, Kool-Aid-guzzling Trumpists will not take them seriously. Well, a whole lot of liberal nastiness over many years has led so many of us to never take them seriously when they hurl over-the-top insults at Republicans.

We all know the fable about the boy who cried wolf. Maxine Waters is the girl who cried racist. She’s hardly alone. There’s a slew of liberals who have cried racist.