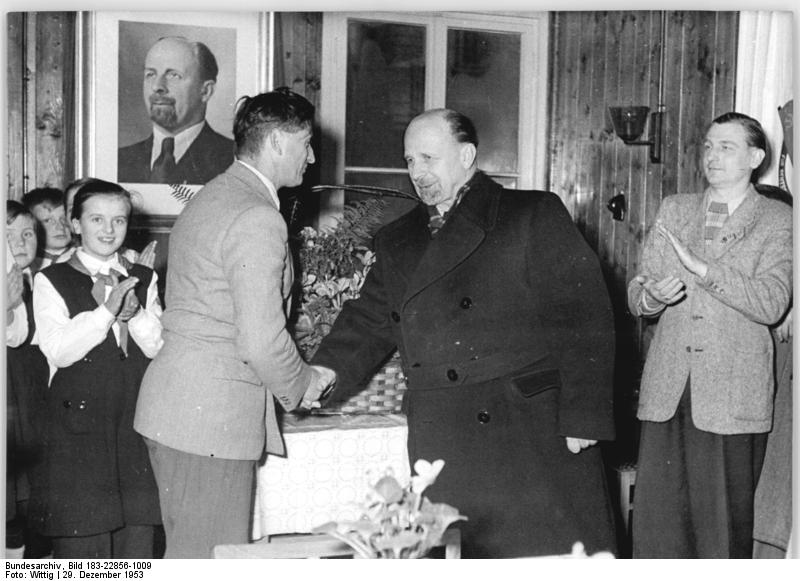 Almost every people’s democracy, which used to fill Eastern Europe, faced that embarrassing moment when workers dramatically demonstrated that they lacked appropriate appreciation for the many sacrifices made on their behalf by their Commie betters. At which point the only solution for the saviors of mankind was to send in the military, usually courtesy the lead workers’ paradise, the Soviet Union.

So it was in East Germany, known in the West as the Sogenannte Deutsche Demokratische Republik, or So-called German Democratic Republic. What had been the Soviet occupation zone was turned into the usual human utopia, along with the countries of Poland, Bulgaria, Romania, Hungary, and Czechoslovakia, all “liberated” by the Red Army. (Moscow played a much lesser role in Yugoslavia, and quickly withdrew its military since communist partisans had taken control.)

Even some small villages saw demonstrations; many farmers dissolved the collectives imposed on them. All told perhaps a million people marched.

For a time the Soviets and their local apparatchiks ruled East Germany with a light hand. Until 1952, Moscow hoped to prevent West Germany from rearming and joining the Western bloc headed by the United States. Once that moment passed the East German regime headed by Walter Ulbricht, the communist party general secretary, decided it was time to proceed with the “accelerated construction of socialism,” which in common parlance meant oppressing workers and destroying the economy. The local communists also targeted churches and collectivized farms, measures never known for their popularity.

It didn’t take long for people in the (S)DDR to realize that life was not as good as in the West. Among those most concerned about their living standards, naturally, was the working class. Unfortunately for Walter & Co., Germany had a long history of labor activism going back to trade unions and the Social Democratic Party, which was a powerful force even in Wilhelmine Germany.

By June 1953, the communists found themselves under siege. Living standards had declined, as subsidies were cut, prices were hiked, and work “norms,” production levels necessary to receive a promised wage, were increased. All told, East Germans were working harder, being paid less, and spending more. Living standards dropped by about a third.

The USSR could not isolate its “liberated” German zone. The postwar agreement provided for the shared occupation of Berlin; the Western section turned out to be an oasis of liberty within a massive totalitarian world. Many residents from the East worked in West Berlin, which became a portal through which the freedom-minded could escape (which ultimately led to erection of the Berlin Wall in 1961).

As the East German regime tottered, local apparatchiks looked to “fraternal assistance” in the form of Soviet soldiers and tanks. Even Moscow was uncertain. In June 1953, Joseph Stalin, the “man of steel,” was dead. The collective leadership that succeeded him was spooked, fearing instability in their most important satellite state, and ordered the local party to reverse course on everything but the new norms. (S)DDR officials were demoralized but did so. But workers were energized and demanded that the norms go as well. When the regime refused to surrender on the final point, several thousand people protested on June 12. Three days later workers had the effrontery to officially petition the workers’ paradise for a return to the old norm, but were rebuffed.

On June 16, workers went on strike, something that is not supposed to happen in a workers’ paradise. Then a crowd showed up at the communist party headquarters, demanding to speak to Ulbricht and other top leaders, who unsurprisingly hid in their offices. The Politburo temporized, finally agreeing to make the norm voluntary.

By then, however, workers had recognized their power. Strikes and demonstrations spread the next day. And the demands become political: free elections, civil liberties, and more. Workers in paradise aren’t supposed to require such bourgeois liberties! Yet posters and statues of the usual commie paladins were destroyed and protests spread across the country.

On June 17, Soviet tanks showed up in Berlin. There they gained a reputation as the Soviet Union’s version of the Welcome Wagon — later being even busier in Hungary and Czechoslovakia. As Ulbricht & Co. took refuge in the Soviet military headquarters, the Soviet military crushed the demonstrations, firing at protesters. Mass arrests and sporadic executions followed.

But unrest also hit some 400 communities across East Germany, including the country’s 24 largest cities and 80 percent of urban areas with populations above 10,000. Even some small villages saw demonstrations; many farmers dissolved the collectives imposed on them. All told, perhaps a million people marched. Party shops, a privilege of membership, were looted and burned. Political prisoners were liberated. Red Army violence elsewhere in the country was less pronounced, so demonstrations and other forms of resistance continued for about a week. The East German communist party hemorrhaged members.

The 60-year-old Ulbricht originally appeared to be on his way out but convinced his Politburo colleagues to delay. But he survived the embarrassing moment. Ironically, his salvation was not due to a newfound appreciation of his adoring countrymen but rather because of the late June arrest and purge of Soviet Minister of Internal Affairs Lavrentiy Beria. He had been pushing most strongly for a new course for Germany, including the possibility of a reunified neutral state. Of the (S)DDR he tartly observed, “It’s not even a real state but one kept in being only by Soviet troops.” Embarrassingly true. The rest of the Politburo, however, fearing the impact of further instability, dropped Beria’s idea and decided on continuity, represented by Ulbricht, who promptly purged his critics. After all, to paraphrase Madeleine Albright, what’s the use of the Soviets having such a large Red Army if they didn’t use it?

But Ulbricht, a rigid Stalinist who rejected any rapprochement with the West, could not rescue his nation from economic stagnation. In 1971, he was forced to retire, for reasons of “health,” by his protégé Erich Honecker. The latter only made it until October 1989, forced out as even larger demonstrations enveloped his nation. The Berlin Wall fell about three weeks later and the (S)DDR disappeared.

In the aftermath of the 1953 protests, West Germany showed its solidarity by making June 17 a holiday, the Day of German Unity. After communism’s collapse the holiday was shifted to October 3, when the two Germanys became one, in 1990.

Demonstrators in 1953 had to wait 36 years for freedom from the (S)DDR. Around 200,000 East Germans died from 1945 to 1989 due to communism. Many were killed fighting to be free. Some were murdered while attempting to escape what was an open air prison. Others were executed for resisting the paradise instituted for their benefit. And some were killed in June 1953 protesting what amounted to a Stalinist mini-me regime.

The Evil Empire, as Ronald Reagan the Soviet Union, was both evil and an empire. Both he and Mikhail Gorbachev were key in ending the system of murderous injustice. But so too were the millions of Soviets and Eastern Europeans determined to fight for liberty. Although the East Germans were the first to revolt, they were followed by the Hungarians and Czechs. The last freedom fighters to face tanks were Poles, though their oppressors were Polish, acting against the Solidarity union, it was claimed, lest the Soviets invade instead. But Poland later held the first election in Eastern Europe, a June 1989 wipe-out of the communist party. At that point communism was braindead, awaiting final burial.

The Evil Empire then had lost both its legitimacy and resiliency. In just a couple years the once imposing communist façade was gone, a pile of rubble next to history’s trash can. But we should not forget those who gave so much struggling for the liberties that we take for granted today — including German workers in 1953.