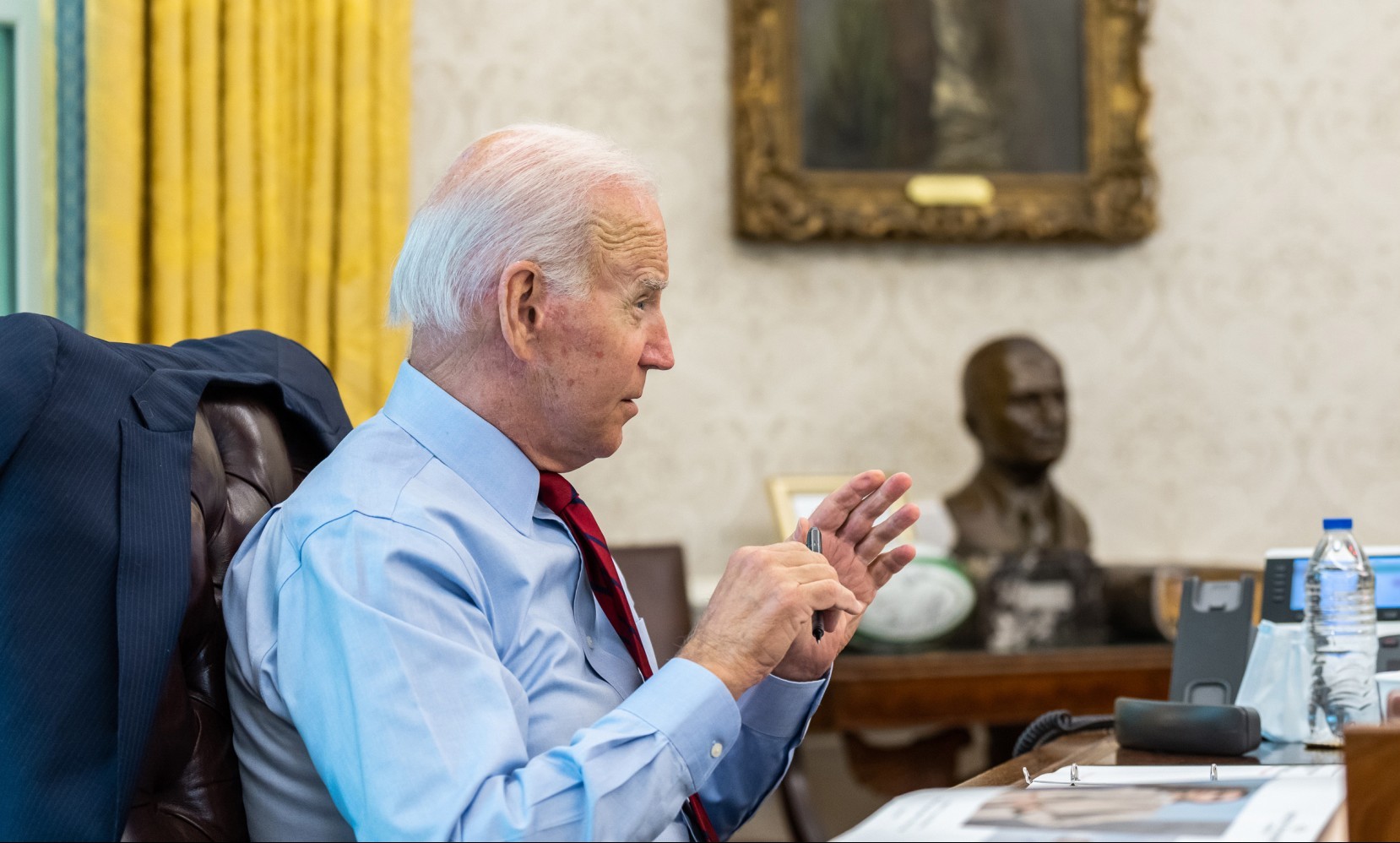 On Thursday, President Joe Biden went all the way to Rockville, Maryland, an entire 13.83 miles from the White House, to mingle with “average Americans” at a high school. And in the speech he gave to the assembled multitudes, almost 3,600 of them, which might be a record for attendance at a Biden rally, he drove the national political debate directly into the gutter.

At a fundraiser before giving a speech plagiarized, at least in spirit, from the howlings of the 20th century’s worst demagogues, Dirty Joe said his political opponents are guilty of “semi-fascism.” He then went in front of a crowded gym full of Democrat activists and lionized Maryland’s pet Republican governor, Larry Hogan, as the antidote to populist conservatism.

Fox News reported on the rally:

“There are not many real Republicans anymore,” Biden said, directing his attention towards Maryland Gov. Larry Hogan, a Republican he said Democrats “can deal with.”

“We disagree … but at least he’s within the mainstream of the Republican Party,” Biden added of Hogan. “I respect conservative Republicans. I don’t respect these MAGA Republicans.”

Biden was later asked what “semi-fascism” means, and this was his response…

Reporter: What did you mean by semi-fascism?
Biden: You know what I mean pic.twitter.com/c3pQtBHolm

Actually, Dirty Joe, we don’t know what you mean.

But we can guess.

In the context of Kathy Hochul, New York’s AWFUL (affluent white female urban leftist) governor, who Otherized more than five million of her fellow New Yorkers and demanded they decamp for Florida, we can guess what Biden means.

In the context of Charlie Crist, the Democrat nominee for governor of Florida who was, like Hochul, formerly a Republican, who announced that he doesn’t want the votes of any Republicans in that state because they’re “hateful,” we can guess what Biden means.

In the context of the dreadful bureaucrat Michael Hayden, whose history as the head of the CIA and other shady governmental agencies contained a long line of offenses against the civil rights of Americans, who endorsed a ridiculous tweet by British journalist Edward Luce which claimed that he has “never come across a political force more nihilistic, dangerous & contemptible than today’s Republicans,” we can guess what Biden means.

We will leave aside the most obvious takeaway from this, which is the predictably obnoxious projection that Team Biden accusing anyone else of extremism or “semi-fascism” constitutes. Perhaps that’ll be the subject of the next column in this space.

More urgently for our purposes is this: the Left in America, and the Democrat Party specifically, is systematically Otherizing its political opposition.

This is more than cancel culture at work. They’ve been trying cancel culture for a decade, and it’s reached diminishing returns because the populace has wised up to it. People aren’t allowing themselves to be canceled like they used to be. Nobody’s participating in the online struggle sessions anymore.

So now that the opposition won’t be cowed into compliance by Twitter mobs and unhinged accusations of bigotry, the pushes become shoves.

Open demonization by the president of the United States and others carrying the torch for the Democrat Party is the new vogue.

And the more meritless the standard bearers, the louder their bleatings.

Charlie Crist might be the single least credible individual in American politics. He’s a man without a smidgeon of character, who will change political parties and ideologies on a dime, and whose personal conduct and behavior is the object of rolling gossip going back two decades. He’s in no position to cast aspersions on anyone else, but he’s shameless enough to do it when ordered by the people at the top of the DNC totem pole.

Ditto for Hochul, who never bothered to skip a beat in her hateful rhetoric after one of her partisans brought a knife to a rally for Lee Zeldin, her GOP opponent, and tried to kill the candidate. Hochul had been putting out Zeldin’s campaign schedule in hopes of sparking protests and other disruptions. When the obvious effect of that manifested itself, did she even pause for a day or two to let the temperature down?

There’s nothing new in the world. And there’s a clear line of development from this kind of rhetoric to where it leads.

As for Biden, he can be held responsible for the things which currently come out of his mouth only because he’s a liar and a demagogue of long standing, a man of uncommonly low character even among politicians, and his current rhetoric is not outside of the pattern of his previous trips beyond the pale. Biden barely even knows what he’s saying now. He’s a mere puppet for the faceless totalitarians actually running America — the Ron Klains, Susan Rices, Anita Dunns, and Barack Obamas of the world, who are sizable admirers of the 20th-century psychopaths who invented the politics of their preference.

Don’t forget it was Anita Dunn, a self-described Maoist, who concocted this Democrat narrative of Republicans as dangerous “ultra-MAGA” extremists. At the time, most of America laughed at the flimsy nature of such a spiel, but it has settled in as Team Biden’s theory of this election.

And when the FBI raided Mar-a-Lago, with, as it turns out, virtually zero evidentiary basis for a kinetic action such as it took to resolve a dispute over documents between Donald Trump and bureaucrats at the National Archives, we now know that all the worst lessons of 20th-century politics are back on the schedule for revisitation.

It starts with rhetoric. It has always started with rhetoric. Usually, it’s a charismatic strongman who carries the torch for the secret police and the black-clad thugs in the streets, but, in this case, it’s the opposite — it’s the puppets and the useful idiots, the people the public doesn’t take seriously.

It’s the president most of America recognizes isn’t running the country and whose credibility is no better than his poisonous approval rating. It’s the idiotic governors of California and New York overseeing mass exodus to friendlier and freer locales. It’s the hopeless candidates trying to fire up their left-wing base; Crist won the Democrat primary over the lunatic Nikki Fried because he had the black vote, but the activist Left was with Fried, and Crist will struggle to reach 40 percent of the vote without them.

Today’s Democrats aren’t Nazis and they aren’t Bolsheviks. This isn’t a Castroite or Chavista revolution. They aren’t outsiders pushing a popular revolt.

They’re the opposite. They’re the Deep State. They’re on the inside and they’ve radicalized as they’ve noticed the public’s seething discontent over their corruption, venality, and failure. And now, they’re turning on the American people.

It starts with the rhetoric. But it’s already beyond it. This election to come is a test of wills. Americans are ready to reject this regime wholeheartedly. But the real problem is that too many people see the GOP the same way Biden sees Larry Hogan — as docile, stupid beasts incapable of leading the change we need.

Republicans have to be more than that. We have to demand that they be more than that. And we have to reject this violent, dangerous demagoguery by Biden and the other arsonists on the Democrat side, or else we know what comes next. It has to be paid back in utter disaster for them come November.

Because if it isn’t, well … add America to the long, sad list of the lost.