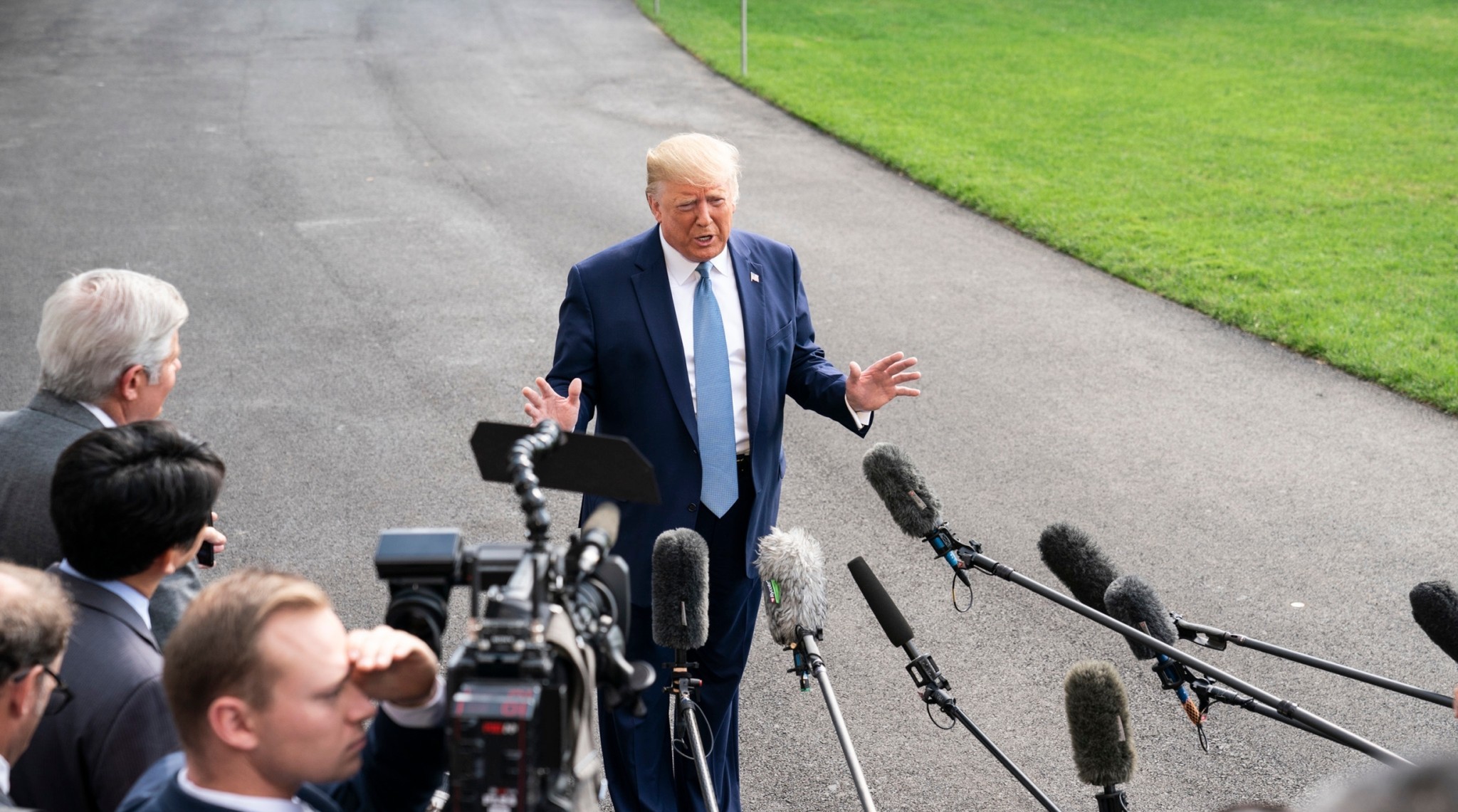 Ya just gotta love the utter cluelessness over there at — yet again — the Washington Post.

Just last week, the paper was standing up for voter fraud denial by opposing the raft of GOP candidates running on a platform of election integrity.

This week? This week, the Post ran a lengthy piece by staff writer David Montgomery with this headline:

What Will Happen to America if Trump Wins Again? Experts Helped Us Game It Out.

The scenarios are … grim.

In the article, a passel of “experts” — not one of them a conservative — were presented with the scenario that former President Donald Trump runs and wins, taking office once again in January 2025. Then, the horrors — the horrors of a democratic free election — begin. The story starts with this:

The twice-impeached president’s tenure in office was a festival of democratic norm-breaking, culminating in the “big lie” about the 2020 election and the Jan. 6 insurrection. A second term would likely bring more of the same — only this time Trump would have four years of practice under his belt.

Note the link in there. It is to this Post article from Nov. 10, 2020, also written by Montgomery.

With an amazing lack of self-awareness, the article wonders this:

Violating presidential norms doesn’t equate to breaking the law. Can Trump steer taxpayer money to his businesses? Can he call for the investigation of his political rivals? Can he fire people in oversight positions and replace them with loyalists? Yes — technically — he can. But should he?

Hello? It is in fact Joe Biden who used taxpayer money to steer millions of dollars to his family’s influence-peddling schemes. It is in fact Joe Biden who has used the FBI to investigate his political rivals — starting with the FBI raid on rival Trump’s Mar-a-Lago Florida estate. And it is the left-wingers in the bureaucracy of the federal government whom the Post spoke of in 2017 when it headlined this:

Resistance from within: Federal workers push back against Trump

That gem reported this:

Less than two weeks into Trump’s administration, federal workers are in regular consultation with recently departed Obama-era political appointees about what they can do to push back against the new president’s initiatives. Some federal employees have set up social media accounts to anonymously leak word of changes that Trump appointees are trying to make.

And a few government workers are pushing back more openly, incurring the wrath of a White House that, as press secretary Sean Spicer said this week about dissenters at the State Department, sends a clear message that they ‘should either get with the program, or they can go.’

Got that? Liberals and Obama supporters inside the federal government were plotting how to thwart the new, duly elected president. And the Post loved it. But now? The very idea that Trump, if reelected, would do the same just horrifies the Post.

So reporter Montgomery writes that he has “turned to 21 experts in the presidency, political science, public administration, the military, intelligence, foreign affairs, economics and civil rights” who “sketched chillingly plausible chains of potential actions and reactions that could unravel the nation.”

Among the comments from this utterly predictable left-wing group was this opener:

“I think it would be the end of the republic,” says Princeton University professor Sean Wilentz, one of the historians President Biden consulted in August about America’s teetering democracy. “It would be a kind of overthrow from within. … It would be a coup of the way we’ve always understood America.”

Got that? A “kind of overthrow from within.” Something known as democracy.

Next, the Post goes on to say that there would be three phases to a “democratic crack-up” under a Trump second term.

This horror would supposedly begin with Trump’s decision to “fire [FBI Director] Christopher Wray and purge the FBI.”

If there is any federal agency that deserves purging, it should be the FBI, which has been thoroughly corrupted by left-wing extremists badly disguised as “professionals.” They have criminalized politics and knowingly targeted Trump himself, his supporters, and Biden’s opponents. They have seized cell phones from a United States congressman (Pennsylvania’s Scott Perry) and private citizens alike. Whether blockading MyPillow CEO Mike Lindell’s car at a Hardee’s restaurant and taking his phone, executing guns-drawn dawn raids on the apartment of Project Veritas founder James O’Keefe and former Trump adviser Roger Stone, dragging former White House economic adviser Peter Navarro off an airplane in handcuffs, or executing another guns-drawn raid on the home of a pro-life activist — terrorizing his seven children — the FBI has been turned into a fascist police force in the style of Soviet dictator Joseph Stalin’s state security police.

Oh, the horror. The Post is concerned Trump would eliminate the Education Department and “Restrict voting to one day using paper ballots.”

And insisting on election integrity by using paper ballots and one-day voting? This system worked forever and a day in the American political system. In departing from it, the voting system has, inevitably, been corrupted. As demonstrated right here in this recent press release from the Department of Justice:

Then the paper says Trump would use “the military to promote his own political power.”

Hello? No less than Chairman of the Joint Chiefs of Staff Mark Milley took it upon himself to set up a coup-in-waiting by undermining the president’s authority as commander of American troops in Afghanistan. As Newsmax reported:

Chairman of the Joint Chiefs of Staff Gen. Mark Milley was reportedly caught on classified intercepts undermining then-President Donald Trump and the Pentagon’s civilian leadership as they worked to withdraw U.S. troops from Afghanistan in the waning days of the administration.

Trump administration officials reviewed classified National Security Agency communications that led them to believe Milley was undercutting the president and Defense Department leaders, Axios reported, according to three sources with firsthand knowledge of the documents.

Milley’s alleged subversion came because he and other top generals reportedly did not agree with Trump’s plans to drastically reduce or completely withdraw troops from Afghanistan.

A dramatic and potentially deadly breach with tradition could come if widespread street protests erupt against Trump and his policies, or if disputes over future elections turn violent. When the murder of George Floyd sparked demonstrations for racial justice in 2020, Trump wanted to call in federal troops. Esper and other national security officials opposed the move and Trump never gave the order. But in a second term with a team of loyalists, who would tell Trump no? “This time Trump’s got a hack Defense Department and moves to repress,” says (Steven) Levitsky, the Harvard professor. “We know that repression of protest very often triggers the escalation of protests; it could get very ugly, very quickly, under Trump.”

Wow. Does the Washington Post, of all papers, not know that President Lyndon B. Johnson — a Democrat, no less — called in the National Guard to put down the infamous riots in Washington in 1968 — riots that resulted in the deaths of 13 people, with 1,000 people injured and over 6,000 arrested? The damage inflicted amounting to over $25 million?

And then there was this extra dollop of un-self-awareness. Said the Post if Trump were reelected:

American global leadership is finished — much to Putin’s delight.

Amazing. Biden conducts an utterly disastrous withdrawal of American troops from Afghanistan, and Putin takes his clue and invades Ukraine. Which is to say, America’s global leadership is in trouble right now — to Putin’s delight. Note well: Putin never dared send troops into Ukraine when Trump was president. But he not only invaded Ukraine while Biden is president, but he also he invaded Crimea when Obama was president.

Last, but certainly not least, there was this:

Racism, including violent racism, is likely to increase.

Recall the words of Dr. Ben Carson, Trump’s secretary of Housing and Urban Development and an African American. Dr. Carson said on the subject of racism that white liberals are “the most racist people out there.”

It is more than amusing that the flagship paper of the Democratic Party — the self-same party founded by slave owners, whose first six political platforms supported slavery, and whose members of Congress opposed the 13th Amendment, which abolished slavery; the 14th Amendment, which gave black Americans due process and equal protection; and the 15th Amendment, which gave freed slaves the right to vote. The same party that established the infamous Jim Crow segregation laws and now supports identity politics — the son of segregation — believes that racism would be “likely to increase” were Trump reelected. They, not Trump’s party, are truly the Party of Race.

What’s really, seriously bad is the Washington Swamp of left-wing insiders who believe they have a God-given right to run the federal government and who are terrified that a majority of the American people believe otherwise.

No wonder they hate Trump. It’s because they hate democracy.

Jeffrey Lord
Follow Their Stories:
View More
Jeffrey Lord, a contributing editor to The American Spectator, is a former aide to Ronald Reagan and Jack Kemp. An author and former CNN commentator, he writes from Pennsylvania at jlpa1@aol.com. His new book, Swamp Wars: Donald Trump and The New American Populism vs. The Old Order, is now out from Bombardier Books.
Most Popular
1
Daily Folios and Consecutive Sentences
On Trump, Kanye, Biscuit, Jews, and Dinners
by Dov Fischer