by Ben Stein
An Anti-Trump protest in Manhattan on Nov. 12, 2016 (Rhododendrites/Creative Commons) 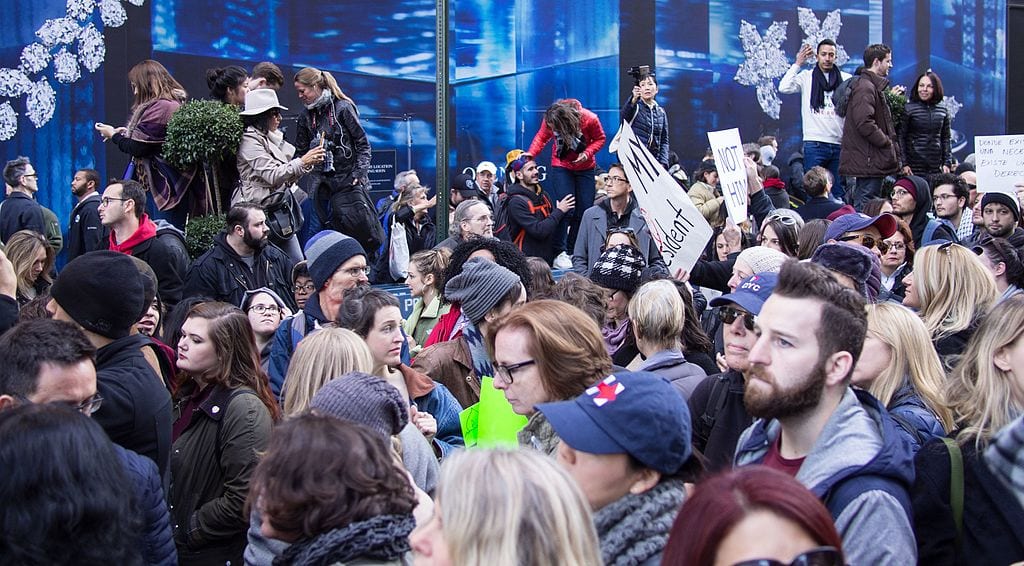 So, dear friends, here we are in the last few hours of the last few days of the decade. And what a crushing, horrific decade it has been. This was the decade in which we started with a black man of legendary status within the nonwhite community. He was not just liked but worshiped by the black people of America. They stood in immense flocks in Grant Park in Chicago to welcome him to power. But what did he do for them? Black on black crime skyrocketed, especially in Chicago. Black poverty and inequality stayed in pitiful condition.

Abroad, Obama humbled America before our enemies. Cut defense. Sneered and cursed at our best friends in the world, the Israelis, and looked the other way when our competitors stole our best intellectual property.

Less than a month into his Presidency, Obama was given the Nobel Peace Prize for nothing.

The whole world went into hysterics of hosannas to show that they were not racists by praising Obama. Yet that by itself was a racist paradigm. Obama was singled out solely because of his race for wildly preferential treatment. He used his pulpit to attack the police and to attack anyone who was not sufficiently devout in his worship of Obama-ism, which is racism in thin disguise.

Then came the wave of revulsion that swept Trump into office. We soon learned that his opponents in the mass media mainstream had suffered a nervous breakdown. The symptoms were an undying hatred of Trump and of anything touching Trump. Plots were hatched. Phony documents were created, all to smear Trump, no one’s idea of a saint, but no one’s reality of a criminal. The lowest forms of libel and character assassination were used. The premier means of law enforcement were co-opted to make it appear that Trump, a patriot of a high order, was a traitor. The top intelligence agencies were “turned” to give “evidence” that the chief magistrate was a traitor. Nothing worked because the facts were simply too powerfully in Trump’s favor.

And then the Democrats hit on something truly brilliant. “Facts?” The screamed. “WE don’t need no stinking FACTS.” We’ll just take our huge advantage in the media and among the beautiful people to stage a lynching in plain sight. No evidence of wrongdoing. Just thug political/media power repeated endlessly.

Someday I would love to get a foundation grant to study the wellsprings of Trump hatred. Is it envy of his wealth? Envy of his bravery under fire? Or envy of some kind of raw and unbeatable sexual power that some men envied and some women craved.

At any event, as this psychosis was sweeping the nation, a genuine economic miracle — unique in its scope and sweep — also swept the nation. A prosperity for whites, for blacks, for Hispanics rolled across the land. Unemployment disappeared. Wages rose, especially for nonwhite people. Prosperity like this in peacetime had never been seen before.

It didn’t matter. The hatred of Trump grew as his economic success grew. The more he kept his promises, the more he was denounced as a liar.

Now the decade is ending. A “low dishonest decade” as the poet said. And it ends with the nation attempting in a ragtag fashion a martyrdom of a man who somehow, some way, saved it. It’s not about law or data or telephone calls. It’s about a sick, malicious envy and it’s dirty to look at. Senator McConnell can and will save today. But what of tomorrow and tomorrow and tomorrow? Are we to be ruled by nightmarish riders of the envy apocalypse from now on? It doesn’t look good.

Ben Stein
Follow Their Stories:
View More
Ben Stein is a writer, actor, economist, and lawyer living in Beverly Hills and Malibu. He writes “Ben Stein’s Diary” for every issue of The American Spectator.
Most Popular
1
Special Report
What in the Hell Is the Penn Biden Center?
by Paul Kengor