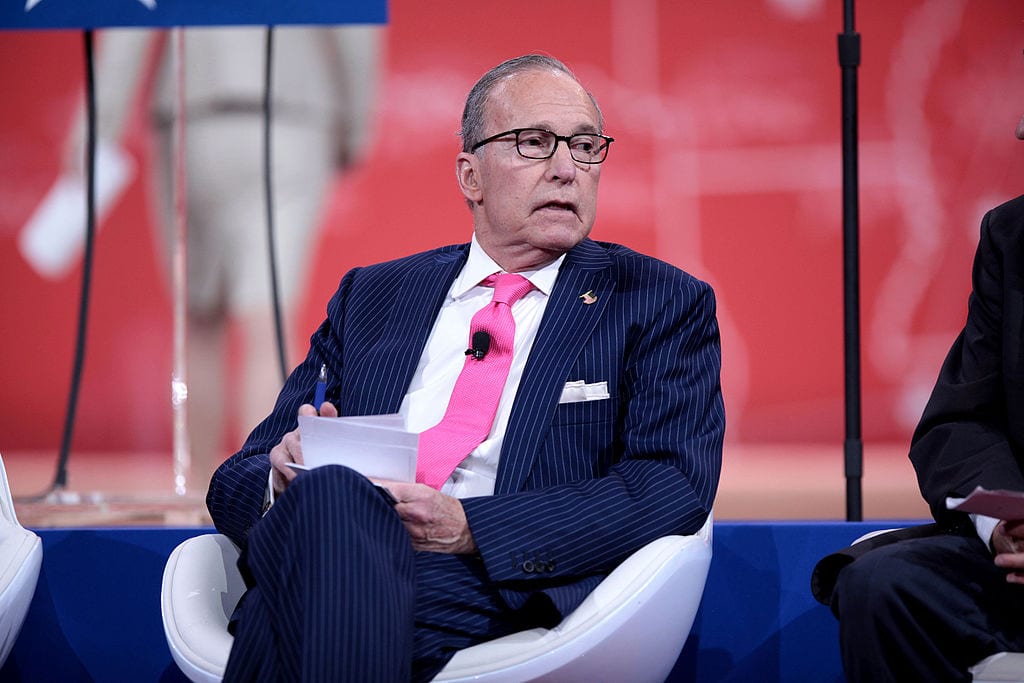 When I read this afternoon that President Donald J. Trump had settled on Larry Kudlow to replace Gary Cohn as his chief economic advisor, I felt light headed and I recalled a bit of Ancient History.

Caligula, the supposedly mad emperor of Rome for four short years from about 37 AD to about 41 AD, had a favorite horse named Incitatus. As a gesture of insane love for this horse, Caligula made him a member of the Roman Senate, by far the highest legislative body on earth at that time. Further, Caligula was planning to make Incitatus a Consul of Rome, equivalent of, let us say, Secretary of State. But Caligula was assassinated before he could make his horse a Consul.

I think it’s not hard to see why the Caligula-Incitatus example raced through my mind. Larry Kudlow, an affable fellow, has, to many economists, absolutely nil stature as an economic expert. He has never been a professor at any school that I am aware of. He has not written anything meaningful about the economy. He had a TV show on which I was an occasional guest for several years until his producers decided I was not de rigueur political correctness wise. He was invariably pleasant and even charming to the guests but his attitude that deficits don’t matter and that tax cuts will solve any problem was comical and he would get angry at me when I disputed that position. Still, as I said, he was an extremely pleasant guy.

But his attitudes about the economy were standard modern GOP slouching towards Bethlehem contempt for arithmetic or the laws of economic gravity.

What made Larry Kudlow such an interesting cast study was that he had been, for a long period, a seriously ill drug addict. The drug was cocaine, and that’s a strong drug. It’s not a joke. Cocaine had gotten him fired from a cushy job at Bear Stearns investment bank. Cocaine had sent him to one rehab after another. At one point he spent 5 months at Hazelden in Minnesota, a top of the line drug treatment center where the standard stay is 4 weeks.

William F. Buckley, a thorough gentleman, had taken pity on Larry Kudlow and had given him a job writing about the economy at National Review. He lost that, too, thanks to his drug addiction issues.

But then something miraculous happened. He got into the 12 step programs I know so well. After decades of false starts, he took the steps seriously. And he became a recovering drug addict. (There’s no such thing as a recovered drug addict. Each addict has a temporary reprieve contingent upon his attitude and his devotion to surrendering to God.)

Then came another miracle. Larry Kudlow is a Jew. He’ll always be a Jew ethnically. But he discovered that he loved Jesus Christ and believed in Jesus’ sacrifice for mankind. So, with the help of a persevering Catholic priest and the super-strict Opus Dei society within the Church, Larry Kudlow became a devout Catholic. He believed in the supply-side effects of tax cuts and the supply-side effects of surrender to God on the spiritual path.

He threw in his lot with Arthur Laffer and Steve Moore, gigantic supply-siders who explained that tax cuts would eliminate the deficit back when the debt was about $1 trillion. Nineteen trillion dollars in additional national debt later, they’re still at the same old stand.

But frankly, after a lifetime of pointing out that supply-side simply does not work, I’m sick of the subject. I’m an old guy now and the default, which will surely come, will be my son’s and granddaughter’s problem. Besides, my father was a super-genius economist with more study in the field than Larry Kudlow could even dream of. He was Chairman of the Council of Economic Advisers (sic), a real Congressionally mandated group. And my father served with genius economists like George Shultz and Paul McCracken and ultra-genius financiers like Peter Flanigan. My father served under Richard Nixon, by far the most experienced and intelligent President of the postwar 20th century. But even so, they made terrible mistakes close to as bad in their own way as supply-side.

The main one was that they allowed the Democrat majority in the Congress to bully them into imposing wage-price controls in August of 1971. This was a stunning mistake. It won’t bankrupt the nation, like supply-side, but it set a terrible precedent for regulation.

Whoever is in charge of advising the President is going to be a highly fallible human advising another highly fallible human. It’s highly believable that a man who has come to his Higher Power, as Larry Kudlow has, will be led to give good advice. We already hear that he’s pleading with Mr. Trump to back off this foolishness about tariffs and stick with free trade as much as humanly possible. And anyway, the economy is super strong right now.

So, Trump is not Caligula, although he, like the Emperor, is an erratic fellow. And Larry Kudlow, while he is not Paul Samuelson or Milton Friedman, is certainly not Incitatus. In fact, in the salvation of his own life through surrender to a power greater than he, he’s a star. I wish him great success. By the way, this all holds true even if Trump changes his mind tomorrow. To me, Larry Kudlow is a star.