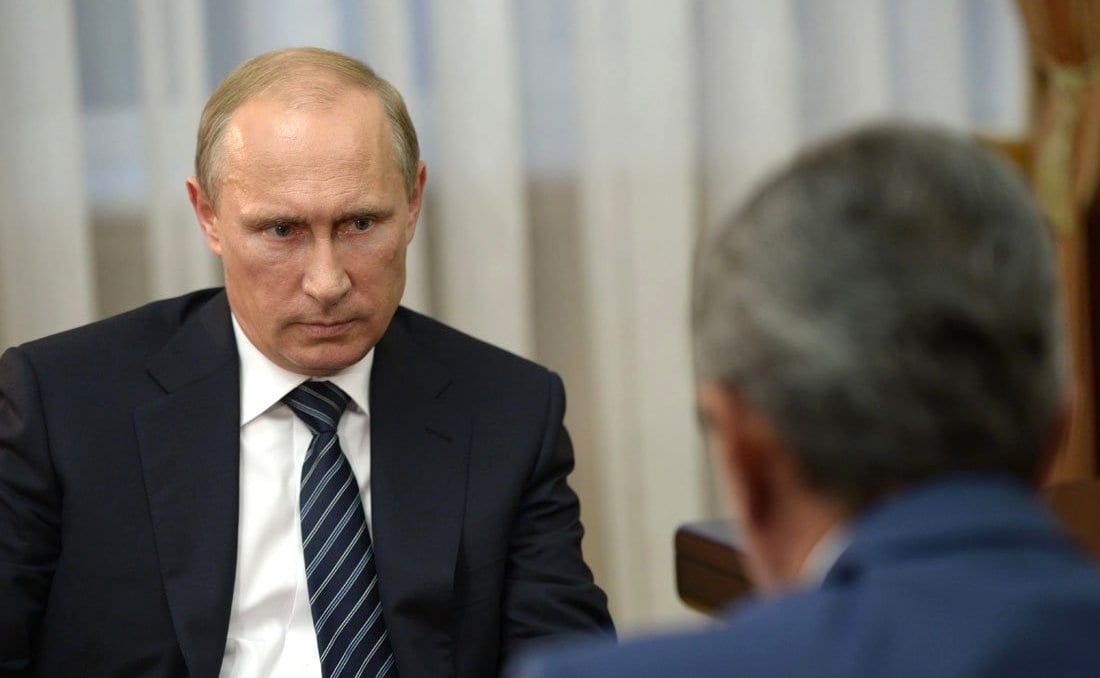 The threat an adversary poses is best gauged by determining its intentions and capabilities. That analysis makes China, which has much greater capabilities than the Russian Federation, the greater danger.

We have to add to the measurement of those nations’ capabilities and intentions the personal characteristics of those nations’ leaders and their governments, the nation’s proximity to America’s vital national security interests, and the difficulty in determining the nation’s intentions. The scale tips in favor of Russia because of the nature and personality of Vladimir Putin.

The late Walter Laqueur’s book Putinism is a study of both the man and the government he has formed around him. History is replete with military dictatorships and monarchies that ruled by a claim of divine right. As Laqueur demonstrates, the Putin government is neither of those kinds of autocracies. It is a government of the “siloviki” and, while it may not be unique in history, it is unique today.

The siloviki are politicians who Putin promoted to power from their careers in Russian intelligence agencies. Putin was a KGB colonel before the KGB promoted him to political power. He has surrounded himself with a clan of former GRU, KGB, and other intelligence agency “graduates” who are the only people he trusts to govern with him. The siloviki are allied with the Russian oligarchs who enrich the siloviki while they enrich themselves.

In short, Putin’s government is an autocracy of, by, and for the siloviki.

Putin and his government are profoundly anti-American and anti-Western. He, and they, are aggressors and opportunists. That means they will exploit any opportunity to thwart American action and will create those opportunities whenever and wherever they can.

Putin is a patient man but his patience is not inexhaustible. He understands that Europe and America are passing through a time of great psychological and cultural weakness. He also understands that Russia is economically weak. Because of that, Putin is playing a short-term game while trying to extend it by any means he can.

All of that is the context in which Putin’s actions must be seen. Together, his context and actions can lead us to discern Putin’s ultimate goals.

One of the few constraints on Putin is NATO’s mutual defense commitment. Since NATO was created, the Soviet Union, and now the Russian Federation, has tried to split the alliance apart.

That Putin continues to pursue that goal is no surprise. But the ease at which the Europeans enable him do it increases the threat Russia poses.

Treaty violations are no greater constraint on Putin than they were on his Soviet forbears. The Intermediate-range Nuclear Forces (INF) Treaty bans both Russia and the United States from possessing nuclear-capable missiles that have a range from 300 to 3,400 miles. The Russians have developed and deployed precisely that sort of weapon, the 9M729 cruise missile.

Secretary of State Mike Pompeo has said that because of the Russians’ blatant violations of the INF Treaty we will put our obligations under that treaty in suspension in sixty days unless Russia becomes compliant by that time. That’s bloody unlikely.

Pompeo’s announcement was met quickly with the boilerplate Russian denials, accusations that Trump is igniting a new arms race, and threats directed at Europe. A Russian defense chief said that if we deployed such missiles in Europe, wherever we did so would be targeted with nuclear weapons that would otherwise be aimed at America.

That threat was sufficient to panic many prominent Europeans who blame us, not the Russians, for starting a new arms race. French President Emmanuel Macron — who has been publicly invisible during the month-long violent Paris riots — surfaced long enough to call Trump to chastise him.

Putin has seduced Europe into becoming dependent on supplies of Russian gas which, of course, can be cut off at any time for political reasons.

Trump has criticized German Chancellor Angela Merkel for her dedicated support for the Nordstream pipelines bringing Russian gas to Europe. Merkel’s successor as Christian Democratic Party leader — and probably as German chancellor — was chosen last weekend. She is Annegret Kramp-Karrenbauer who, like Merkel, will support the pipelines and be very weak on Russian aggression in Crimea and Ukraine.

Russian conquest of Crimea is another action that can lead to a conclusion about Putin’s goals. The port city of Sevastopol has long been the home base of Russia’s Black Sea fleet. Putin’s “hybrid warfare” — using Russian troops who wore no markings identifying them as Russian — gained the entire Crimean Peninsula which Putin formally annexed to Russia.

Which led Putin to the next logical step in his characteristically Russian effort to reconquer the “near abroad,” the former Soviet satellite nations. Putin’s attack against Ukraine, again using his hybrid warfare method, began four years ago.

A word about Putin’s “hybrid warfare” is necessary to understand the Ukraine conflict and Putin’s method of achieving his goals. A 2016 study by the Army’s Asymmetric Warfare Group at Fort Meade, an unclassified version of which is available online, gives considerable insight into Putin’s army’s methods. It demonstrates how he has brought the Russian army into the 21st century.

According to the AWG report, Putin’s army’s new methods include such things as cyberwar capability at the battalion level. Russian-led separatist forces regularly call upon direct Russian support ranging from artillery to cyberwar and other information warfare capabilities. Most interesting is Russian investment in electronic warfare assets capable of jamming not only radio communications between local military opposition but also radar and other electronic detection systems.

These are capabilities that reside — to the extent they exist at all — at much higher command levels in our — and Ukrainian — military forces. As a result, Russian forces, by their cyber and electronic capabilities, may have the ability to defeat U.S. and NATO forces that they may encounter.

To ensure that outcome, Putin is spending enormous funds on designing and deploying new classes of ships, submarines, missiles, and aircraft.

Putin has apparently lost patience with the slow conquest of Ukraine. In a significant escalation of that war on November 25, Russian naval forces attacked and seized three Ukrainian vessels — two patrol boats and a tug — when they tried to enter the Azov Sea through the Kerch Strait, the narrow passage that is the only route to the Azov Sea.

The Russian action was in violation of its 2003 agreement with Ukraine that the Kerch Strait was a shared waterway. Russia has built a bridge across the Strait which, by virtue of its low presence over the water, bars ships more than about one hundred feet tall from passing under it. Thus, Russia is gradually strangling Ukraine’s two big ports — Mariupol and Berdyansk — which lie on the Azov Sea.

The Russian ships were, according to the Russian government-controlled website “Sputnik News,” FSB ships. It was a siloviki operation.

Not only did the Russians seize the Ukrainian vessels illegally, they have forced confessions from several Ukrainian sailors of violating Russian borders and have broadcast their “confessions.” Moscow has defied demands that the sailors and their boats be released.

Russian troops are reportedly massing at Ukraine’s borders. They have done so before, but their massing may portend another big escalation of the war. U.S. Air Force aircraft have overflown the conflict zone twice in the past week. The flights — by reconnaissance aircraft — were supposed to send a message that further attacks on Ukraine would not be tolerated.

But these flights won’t stop Putin’s actions. He knows that we, and NATO, aren’t going to take military action to stop them.

Putin’s actions aren’t limited to Europe. He has signed a treaty with Iran and Turkey — still part of NATO — to support the Syrian terrorist regime of Bashar Assad and has built permanent naval and air force bases in Syria.

Russia has sold S-300 and S-400 anti-aircraft/anti-missile systems to several nations and deployed them to clients including Syria. The Syria deployment is intended to limit Israel’s — and our — ability to conduct air strikes against the Assad government.

Russian arms — in unknown types and quantities — and Russian funds are being supplied to the Taliban in Afghanistan. Russia has, for about two decades, been building nuclear power plants in Iran.

Russia’s sale of S-400 systems to Turkey — the most anti-American nation in NATO — is a further effort to split Turkey from NATO. We have warned Turkey against buying the S-400 which not only is incompatible with NATO systems, but poses a more direct threat. Turkey is buying our latest fighter, the F-35, but hasn’t yet been allowed to take the purchased aircraft to Turkey.

If the Turks are permitted to take the F-35s to Turkey, they — and the Russians accompanying the systems — can test them against the S-400s. Obviously the Russian military will be privy the results of those tests.

India has purchased Russian aircraft and arms for about twenty years. It announced its purchase of S-400s in October despite the risk of U.S. sanctions. Putin wants to maintain and grow Russia’s influence in India which is valuable not only because it reduces U.S. influence but as a backstop against China.

Putin has militarized a substantial portion of the Arctic by building several military bases there and building heavy icebreaking ships as quickly as Russian shipyards can. The Arctic seabed holds the largest undeveloped reserves of oil and gas known. Russia aims to own and control it.

His Arctic conquest-by-militarization has gone unanswered. Russia is building military equipment, ranging from rifles to electronics, specifically designed to function at severely low temperatures. We have nothing to compete with it.

From the assessment of Putin and his government, and from their actions, we can conclude that Putin’s ultimate goals are twofold.

From the czarist era through the Soviet era and now in the Putin era, Russia has been dominated by its intelligence agencies including the secret police who enforce political order. Under Putin, the siloviki have achieved a permanence in power that could only be overthrown by another Russian revolution. He has thus achieved his first goal, which was to establish a siloviki dynasty that will survive him.

Second, Putin wants to rebuild and restore Russia to his concept of the “Russian ideal,” a superpower that will dominate Europe culturally, economically, and militarily. To do that, in the zero-sum game of global politics, he can only do that reducing the United States to a regional power.

The question is whether we — and Europe — can recover sufficiently from our psychological malaise to stop him and the siloviki who will succeed him.