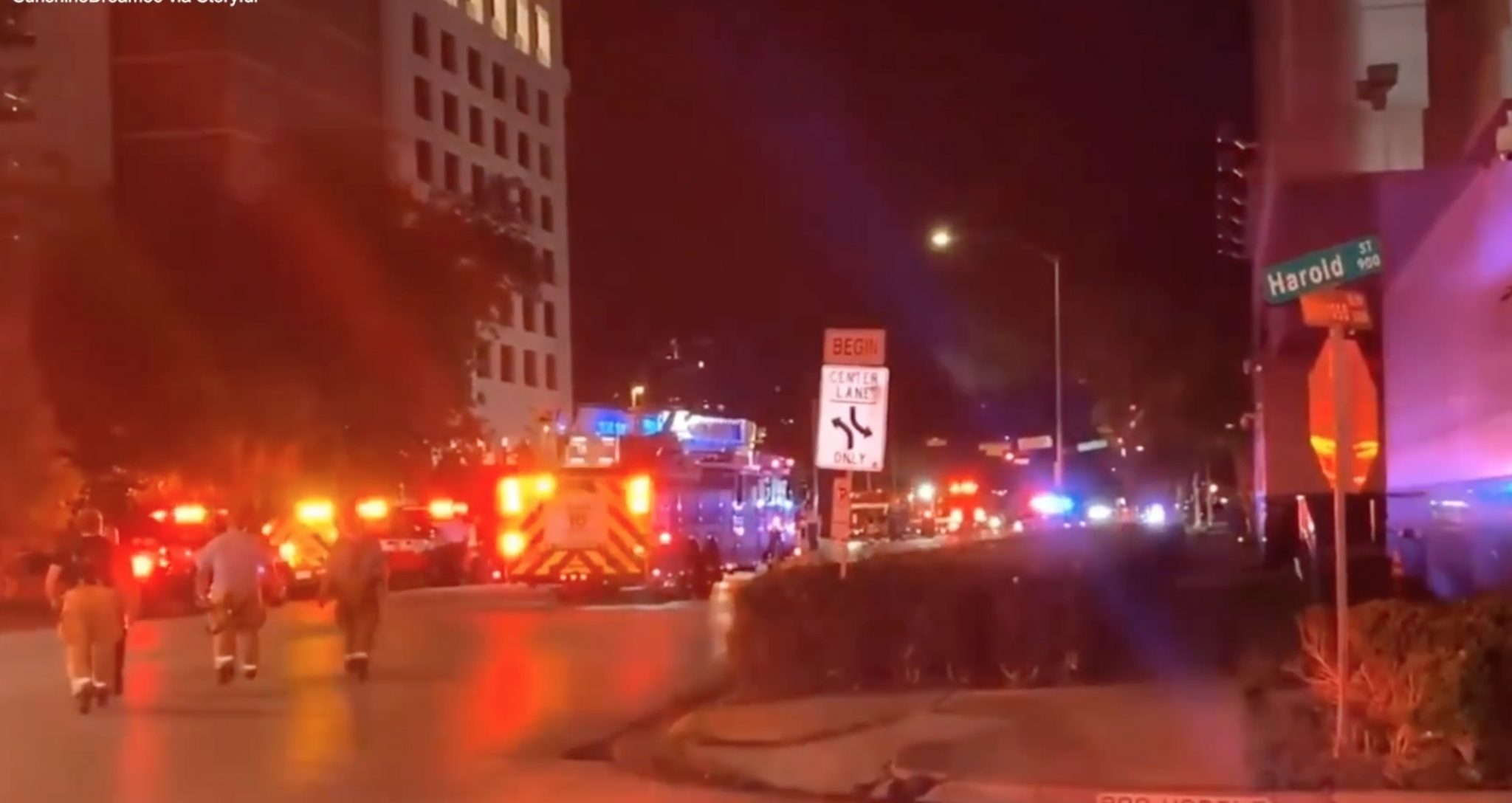 Last weekend at Power Line, John Hinderaker donned a conspiratorial cap and mused about exactly what it is we as a nation are going through and who benefits from it all.

If you ran the Chinese Communist Party, what would your number one strategic goal have been in late 2019? Undoubtedly, to get rid of China’s nemesis, Donald Trump, and replace him with Beijing Joe Biden. How far would China’s rulers have gone to achieve that goal? Look what they have done to get rid of the Uighurs, a minor annoyance.

Could the Chinese have deliberately arranged for the worldwide dissemination of the Wuhan virus? Yes, rather easily. They could have created the virus, too, but that isn’t necessary. Once the virus escaped from a laboratory in Wuhan, by means unknown, the rest was probably inevitable.

Of course, the virus did some damage within China, but nowhere near enough to pose a threat to the regime. And to the extent that there was collateral damage in Europe and elsewhere around the world, such damage, from the CCP’s point of view, was a helpful distraction at a time when China is building up its armed forces and extending its military footprint across Asia.

Does anyone think China’s rulers are either too inept or too principled to unleash the Wuhan virus on purpose? If so, why? They have done worse. And here, they would have been playing for enormous stakes — restoration of the pro-China, globalist regime that preceded Trump’s America First rebellion. Hardly any price would have been too much to pay.

And, having watched the first three years of the Trump administration unfold, China’s rulers could well have calculated that a pandemic originating in their homeland stood a good chance of reshaping America’s electoral landscape. The desperate Democrats and their press would blame the president and his administration for the disease — something that has never occurred before in American history, but was sure to happen this time. If the Chinese did seek to influence our presidential race, they were successful. President Trump has gone from being a prohibitive favorite in January to an underdog today, and the reason is the Wuhan virus.

Do I think China’s leaders deliberately unleashed the Wuhan virus on the world? I don’t know, but I no longer consider the idea outlandish. The virus’s origins are shrouded in mystery, and investigation of those origins has been discouraged, to put it mildly. Indeed, even mentioning the disease’s place of origin — Wuhan — has been denounced as “racist.” The virus may bring about the Chinese Communist Party’s number one goal. I don’t see any reason for a conclusive presumption that this fact is a coincidence.

Are you allowed to believe the things Hinderaker suggests? A certain political party in America would undoubtedly say no. Secretary of State Mike Pompeo was in front of the Senate Foreign Relations Committee on Thursday after last week unleashing a spirited statement signaling a definitive change in America’s attitude toward the Chinese Communist Party, and Pompeo was ambushed by the uber-corrupt Robert Menendez, whose rhetoric differs little from that of the ChiComs:

“Under your watch, the United States has faced setback after setback on the world stage, ceding leverage and influence to our stated adversaries,” said Senator Bob Menendez, the committee’s ranking Democrat.

Menendez’s broadside was eerily similar to a propaganda video released by the Chinese government-owned China Global Television Network last week, which lambasted not just President Trump but British prime minister Boris Johnson and Brazilian president Jair Bolsonaro as “populists” incapable of meeting real challenges and therefore “inventing” fake ones like controversies with China. Creepily, the video termed COVID-19 as the “test case” for that incapability, almost in a way suggesting that the virus was intended to so serve.

As Hinderaker notes, you are certainly not allowed to believe that the virus was a bioweapon. We all know that. Even to remind others within earshot that it was of Chinese origin would make you a racist by the modern crackpot definition of the term.

Of course, it isn’t necessary for the virus to have been a bioweapon per se. All that was required was for it to get out into the world.

Are you allowed to believe that once the virus was plaguing the city of Wuhan and escaping to other cities to build body counts and threaten an economic shutdown the ChiComs couldn’t afford, that regime deliberately allowed it to spread to Europe and the United States? It isn’t an over-the-top belief, after all. If China was to suffer economically from the virus, would the regime not wish to level the economic playing field?

Does China not benefit from economic carnage in America and Europe? Did China not swallow Hong Kong whole without so much as a peep from the U.S. and UK as they did the deed? Pompeo has announced a long list of consequences, none of which change the fact that Hong Kong’s independence is over.

In his Yorba Linda speech outlining the change in approach to China, Pompeo said what you know is true though are not allowed to believe — that opening trade to China has been a disaster, not just for America, but for the rest of the world. The Chinese have cheated their way to a position of economic strength they do not deserve, and while American interests have been damaged along the way, it’s other countries — Mexico, Brazil, India, Thailand, countless more — who have lost the opportunity to supply the international market due to Chinese state mercantilism allowed and promoted by fuzzy-thinking American globalist policies.

Are you allowed to believe the regime treated the virus as an opportunity to engage in military adventurism and a worldwide propaganda offensive?

Are you allowed to believe that China played a role in the mask-mandate debate roiling America? Until this spring it seemed to be fairly commonly accepted science that cloth face masks did little or nothing to prevent the spread of viruses, going so far that in early June the World Health Organization’s technical lead on COVID-19 suggested masks are useless because asymptomatic spread of the virus is rare. Less than 24 hours later she was sidelined, the WHO jumped on board the mask train, and now your civil rights are practically forfeit.

Who makes the vast majority of those masks you buy in stores? China.

Incidentally, the mask isn’t performing so well in stopping the spread of the virus, in case you haven’t noticed. In California, almost three months ago the governor instituted a stringent mask mandate. Within two months case counts had increased by 250 percent. In Louisiana, the results have been similar in the two and a half weeks since a statewide mask mandate edict emanated from the governor’s uncovered mouth.

What’s the excuse for the poor performance of the mandates in stopping the spread of the virus? People aren’t sufficiently complying.

Both governors are members of a certain political party that commonly sounds similar notes to those played by the Chinese Communist Party.

Are you allowed to believe China is involved in promoting the violence and unrest in America’s cities? Last week the State Department ordered China’s consulate in Houston closed, which occasioned a quick bonfire of documents in the courtyard of that building so large that the local fire department was called to the scene. The Houston consulate was known to be a center of espionage through which the theft of intellectual property in the field of medicine had flowed — China is trying to beat the world in producing a COVID-19 vaccine, which would be another way they could monetize the virus. Stealing intellectual property from American medical researchers appears to be a key part of the their strategy.

What else where the ChiComs there up to? National Security Adviser Robert O’Brien had made statements following the outbreak of George Floyd-themed street violence that foreign action was suspected, and China was among the countries he mentioned.

Is China promoting Antifa and Black Lives Matter? Wouldn’t it be in the interest of that regime to foment unrest in our streets to balance its own internal issues? The world has been made aware, in technicolor, of Chinese abuse of the Uyghurs — from photographs of bound prisoners being loaded onto trains to NBA coaches admitting their training camps in western China were essentially concentration camps for Chinese minorities. And of course there’s what has happened to the people of Hong Kong.

Why wouldn’t China want to push Antifa and Black Lives Matter to build the narrative that America is a racist, unstable, morally unsound country? China seeks to take away America’s position of world leadership, especially at a time when Trump is building relations with India and the Anglosphere is reorienting itself to act as one. Doesn’t that leadership suffer from the violence in our streets?

Particularly during an election year?

Chinese meddling in American elections isn’t new. Going all the way back to 1996 it’s been known that Chinese money flows into the campaign coffers of candidates from a particular political party. That party’s current candidate has been all but bought and paid for by Chinese investment dollars; no one really disputes this. The candidate is moreover on video repeatedly singing the praises of the Chinese and discounting the idea they present a threat.

Are you allowed to believe China is meddling in the 2020 election?

Are you allowed to believe that China exercises significant influence over America’s major media? Chinese investors and companies, all with ties to the Chinese Communist Party, hold relatively significant stock positions in all six of the media companies that control 90 percent of the television channels and film entertainment producers in America. We’ve seen the Chinese exert influence on various film and television productions — there’s a reason the Red Dawn remake, in a classic example, had the wholly implausible North Koreans as the invading bad guys. Is it so hard to believe something similar is at work with respect to news? We’ve already seen it in the case of Bloomberg.

Because once you are allowed to believe the Chinese have motive, opportunity, and capability to do these things, you’ll find a mountain of evidence, though admittedly much is circumstantial, that they’re playing a lot larger role in our current woes than we give them credit for.