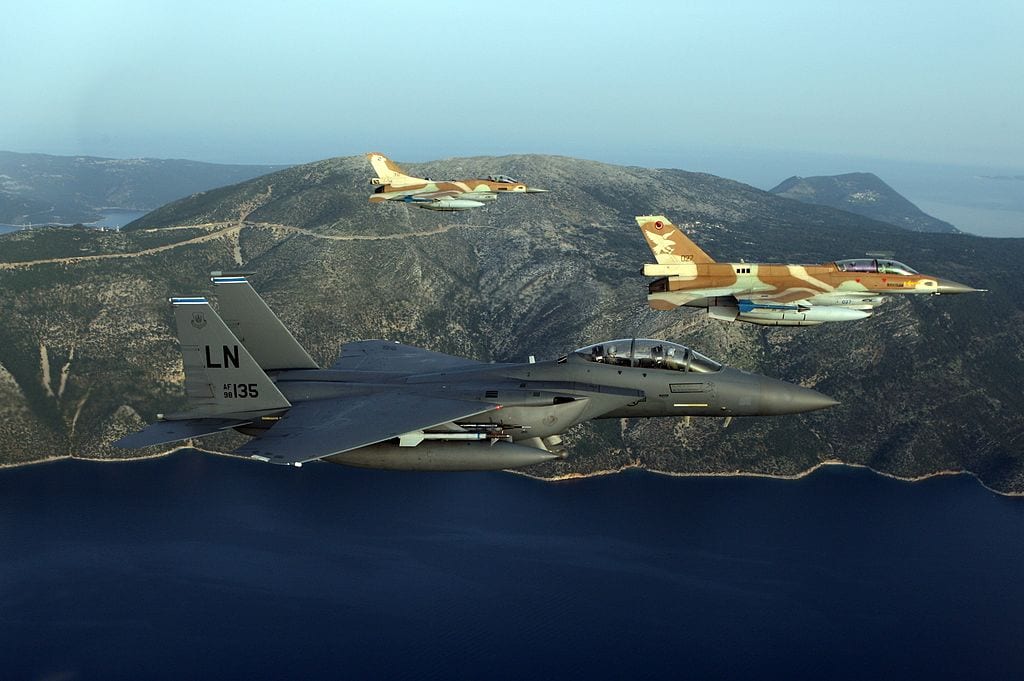 All eyes are focused on the Olympics, where a younger generation of naive South Koreans was being seduced over the weekend by the sibling of the Thug of the North. But the bigger story, which we hope will not unfold, at least this week, is in another part of the world, with profound implications beyond that region. More on that, in a moment.

In 1932, long before I was born, my mother was working in the garment district in New York. So were her four roommates (her sisters) — well, two worked as housekeeper-maids; her four brothers struggled also in New York with not-especially-glamorous gigs. Those were the days when entry level jobs for the unskilled who had little education and were barely learning English were appreciated for what they were, not confused with career-capstones. No bilingual (Polish) entitlements or election ballots in Polish. There was this weird credo — assimilation.

My mother and her sisters had emigrated to the United States in that momentously prosperous year of 1929, that pivotal milestone that seemed to set in motion what would be called the Great Depression, caused principally and aggravated mainly, as Nobel Laureate and the economics genius of the last century, son of immigrants, Milton Friedman (who I was honored to know) and his colleagues demonstrated conclusively, by Big Government.

My father, whom my mother had met as a teenager back in Poland, had emigrated in 1930 with his best friend to Argentina. Prevented by immigration quotas from coming to the United States, he would propose marriage by mail to my mother who somehow would save enough to travel nth class on a not-luxurious ship — in 1934 — from NYC to Buenos Aires. Quickly married, he then was able to enter the United States and prepare to become, as his new bride already was (having gone to night school and learned about archaic concepts like the Declaration of Independence and the U.S. Constitution and now seemingly discredited icons like Washington and Lincoln), an American citizen.

That same year, the 1932 Olympics would take place in Los Angeles, the city where, after World War II, I would be born and grow up. But four years later, in 1936, arguably a more important Olympics would take place in Berlin. That’s where the great James Cleveland Owens won four gold medals. In those days, Jesse Owens was not black or African-American but Negro; whatever the word, Owens was a wonderful human being, and a super-athlete in some ways unrivaled to this day. His glorious triumph was more than a victory for America, it was an inspired and crushing rebuke to Hitler, and his monstrous and core theme of “Aryan supremacy.” (Footnote: that idealized progressive-liberal- but-in-truth bigot Franklin D. Roosevelt would not invite Owens to shake hands at the White House; perhaps FDR reflected the racism of his predecessor-Democrat, Woodrow Wilson.)

All this is preparatory to: What if Hitler’s sister (did he have one?) was an attractive, well-groomed fashionista who attended the 1936 Olympics in a special box? Would she have been the subject of a fawning profile by the New York Times? Actually, maybe so, because the NYT rather underplayed the rise of Hitler and opted not to cover the Holocaust, as it was occurring So, maybe CNN was traditional in its glowing puff piece about Kim Yo Jong, the attractive 30-year-old younger sister of Kim Jong Un, the brutal Hitler-like (or is it Hitler-lite?) dictator of North Korea. Kim, who won’t reveal his age, is somewhere between 35 and 37. But he has the maturity of a late teen and, we hope, not commensurate testosterone, because he is intent on securing the means to deliver nuclear weapons to at least Honolulu, and more realistically, even to the host city of that Olympics in 1932, my domicile municipality of Los Angeles. What happens in North Korea does not stay in North Korea,

While the Doomsday clock runs closer to midnight as we perfect options (not all conventional and predictable, beware Kim) for four-star Gen. Vince Brooks, our man in Korea, there is a story covered abruptly, and ineptly, by the American media. (Parenthetically, remember that Korea and Iran are cooperating in nuclear development.) An Israeli F-16 was shot down while returning from a bombing run in Syria. Did Israel overreact to a Syrian drone (a copy of a U.S. drone that had in the past fallen into enemy hands entering Israeli airspace)? Even Amazon has drones… But Israeli PM Benjamin Netanyahu knows a slippery slope when he sees it, and I’m not talking about the descent down the Golan Heights. What was Bibi thinking?

Here’s the backstory. Barack Obama, whose preposterous vision and his hoped-for legacy was Iranian hegemony in the Mideast, made an awful deal that Senate Republicans enabled as an “executive agreement” (the good news is that Trump, as chief executive, can un-do it) rather than a “treaty” requiring confirmation (that could not be easily undone). Note that major corporate interests, especially in Europe, backed the Iran deal, so they could make money (just as Big Business, even in the U.S., wanted cordiality with Hitler). Obama’s sellout, incompetent and bungling at best, devious and evil at worst, gave the Iranians almost everything they wanted, in return for a not-entirely verifiable hiatus in their increasingly redefined nuclear program. He gave them tens of billions or more, depending on how you count the bucks. Part of the money made its way predictably into Iran’s terrorist cartel, including — as former Israeli Ambassador to the U.S. Michael Oren warned in the summer of 2015 — enhancing the capability (maybe even GPS) of somewhere between fifty and one hundred thousand (not a typo) Hezbollah rockets, many of them in Syria and Lebanon.

Vladimir Putin is nostalgic for the old days when the former Soviet Union in the 1950s and 1960s backed Egypt’s Nassar, and later backed Syria’s tyrant Hafez al-Assad. The proverbial branch does not fall far from the tree, but we know that his son Bashar is a Bigger Tree, more rotten to the core: he is far worse than his role-model father — note Bashar’s mass killings and gassing of his people.

The Soviet Communists had supplied Syrians (Hafez) with MIG fighter planes, but the Syrian pilots, even in the 1980s, were less than stellar, and in later years the aircraft were not maintained. Looking for the glory days, Putin — under the guise of fighting ISIS — began providing not-antiquated air defenses to Thug Assad. While they will be hardly impenetrable to the Israelis, they are far from trivial.

Former Israeli Air Force pilot Amos Yadlin was chief of Israeli Defense Force Intelligence. Not as public as the Mossad, the IDF Intelligence is competent, its former chief not an alarmist. Israeli F-16s actually are often variously enhanced over the basic U.S. model, and none has been downed for a generation. Still, the loss of a single aircraft might be seen as tactical. But Yadlin sees in all of this “a major strategic clash on the horizon.” Yadlin elaborated that the Syrian drone’s infiltration was a proxy for Iran’s desire to counter Israel’s moves to prevent more weapons transfers to Hezbollah, not just in Syria but even Lebanon.

Unlike in the Obama era, both the Pentagon and even the internally Arabist but externally Trump/Tillerson State Department immediately supported Israel. But Yadlin says Israel must now decide whether to act preemptively or wait for the war that Iran wants to start. Other senior Israeli strategists instead believe that Israel’s swift major attacks on Syria’s air defense and Iranian targets will deter Iran. As Oren warned nearly three years ago, Hezbollah deliberately placed rockets in heavy-civilian areas, including the usual modus operandi — schools, hospitals, mosques — to maximize civilian casualties and elicit the usual CNN, BBC, NPR, NYT, and UN condemnations of Israeli self-defense in destroying rocket launchers. This is another war Israel does not want.

President Donald Trump needs to remind Russian leader Vladimir Putin: if Putin wants Russian prestige, he should pull hard on the leash of the reckless Iranian military chiefs. It won’t help Russia’s image if their air defenses crumble under a sophisticated full scale Israeli attack. Remember, Putin and Netanyahu, and their respective generals, had cordial meetings in Moscow to avoid Israeli-Russian military confrontations in Syria. Now, it’s time for Putin to bet his chips on — what a concept! — peace.

As a team, Secretary of Defense Jim Mattis and Secretary of State Rex Tillerson work well together, and especially with White House Chief of Staff John Kelly. The trio is hardly unanimous in how to salvage Obama’s Iranian debacle, but Iran is now, if inadvertently, surely providing Donald Trump with a rationale for decertification of the Iranian agreement. As for Kelly, if ever we needed a general as White House chief of staff, it’s now. Besides, he is literally the glue that also holds the cabinet together. And one more point: the CNN “breaking news” hysteria aside, when John Kelly saw the wife-beating photo, he immediately said Rob Porter must go.

Kelly must not go, now or in the future.

Arnold Steinberg, a contributing editor to The American Spectator, is the author of WHIPLASH! From JFK to Donald Trump — A Political Odyssey (September 2017, Jameson Books, 640 pages, $39.95).