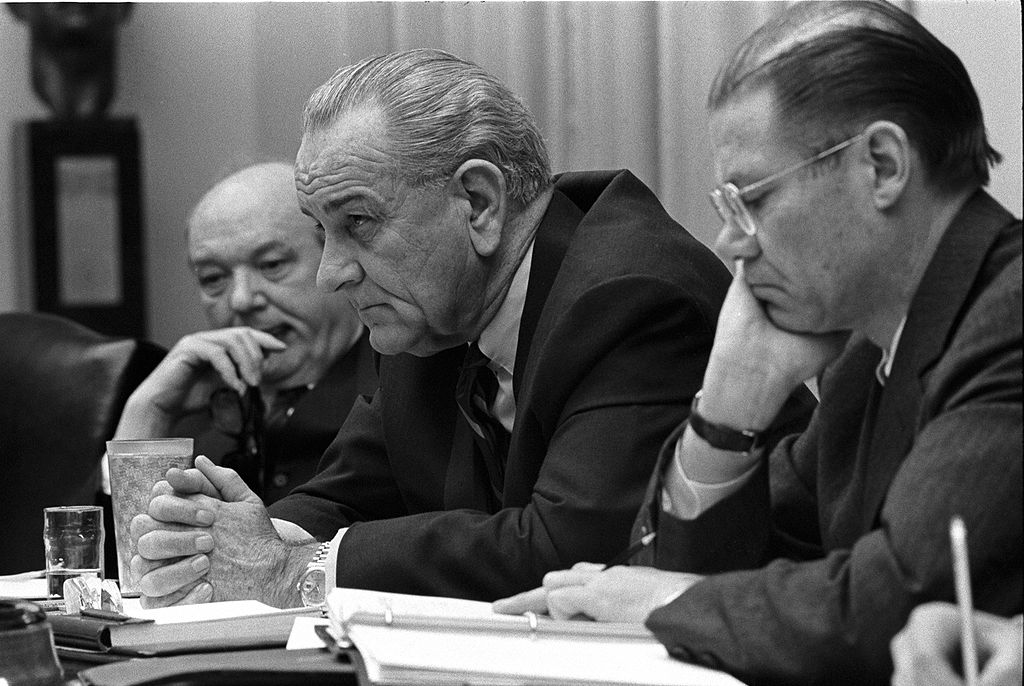 This past October, author Robert A. Caro turned 86, and he continues to work on the fifth and final volume of his magisterial biography of Lyndon Johnson. Caro’s first volume of The Years of Lyndon Johnson, entitled The Path to Power, was published thirty years ago in 1982. That was followed in 1990 by Means of Ascent, in 2002 by Master of the Senate, and in 2012 by The Passage of Power. The fifth volume is projected to focus on Johnson’s Great Society legislation and his expansion of U.S. involvement in the Vietnam War. When The Years of Lyndon Johnson is completed, Caro’s achievement will rank as one of the greatest American political biographies and perhaps the greatest study of the use and abuse of political power by an American politician.

In the first four volumes, Caro has relentlessly explored what he calls the two dominant “threads” of Johnson’s life: political achievement and an unbounded hunger for power. Caro, a philosophical liberal, admires Johnson’s legislative achievements, especially in the area of Civil Rights and voting rights. It was Lyndon Johnson, Caro writes, that “led [African-Americans] into voting booths, closed democracy’s sacred curtain behind them, placed their hands upon the lever that gave them a hold on their own destiny, made them, at last and forever, a true part of American political life.” And it was Lyndon Johnson who became, in Caro’s words, “the lawmaker for the poor and the downtrodden and the oppressed … the bearer of at least a measure of social justice to those whom social justice had so long been denied, the restorer of at least a measure of dignity to those who so desperately needed to be given some dignity, the redeemer of the promise made to them by America.”

Those achievements, however, were overshadowed by what Caro calls Johnson’s “hunger for power in its most naked form, for power not to improve the lives of others, but to manipulate and dominate them, to bend them to his will.” Caro describes Johnson’s lust for power as being “so fierce and consuming that no consideration of morality or ethics, no cost to himself — or to anyone else — could stand before it.”

Johnson’s political success, Caro explains, rested on his uncanny ability to discern a “path to power,” combined with his “utter ruthlessness in destroying obstacles in that path, and a seemingly bottomless capacity for deceit, deception, and betrayal in moving along it.” Johnson’s path to power included befriending powerful benefactors (Sam Rayburn, Franklin Roosevelt), financial and political corruption (oil, gas, defense, and space industries, Caro notes, “raised him to power” and “helped him to extend it”), electoral fraud (he stole the 1948 Senate race in Texas and his forces engaged in similar fraud on behalf of the Democratic ticket in 1960 — yes, sometimes American elections have been stolen), and personal greed (Caro recounts Johnson’s use of political power to create and protect his broadcasting monopoly in Texas that made him a multimillionaire even before he assumed the presidency).

Caro notes that the president who came to be admired as the champion of Civil Rights and voting rights, had while in Congress repeatedly voted against every civil rights bill, including legislation designed to end the poll tax, segregation in the armed forces, and lynching. For Johnson, maintaining and enlarging his power always came first, always dominated his thinking, and always dominated his actions.

Johnson the voting rights champion was also Johnson the “stealer” of elections. In Means of Ascent, Caro writes about in numbing detail the methods by which Johnson stole his 1948 Senate election in Texas and then halted a federal court’s investigation into election irregularities. Johnson ended up “winning” that election by 87 votes (his colleagues jokingly called him “landslide Lyndon”), but Caro notes that “[i]t wasn’t eighty-seven votes that Lyndon Johnson stole to win in 1948, but thousands of votes — many thousands in fact.” And Johnson later appointed the lawyer who helped him fend off investigations of the stolen election to the Supreme Court — Abe Fortas.

Caro in Master of the Senate recounts a conversation that Johnson had with one of his Senate aides: “I do understand power, whatever else may be said about me,” Johnson said. “I know where to look for it, and how to use it.” When Johnson became Senate Majority Leader he transformed that position from one of symbolic seniority into one of real power. Johnson, Caro writes, “bent to his will … an entire institution.” It is as “master of the Senate” where Johnson, in Caro’s words, “used the powers he found and the powers he created with a raw, elemental brutality.” And to achieve more power, he was willing to “betray” his Southern colleagues in the Senate — those same men whom he had voted with time and again to defeat civil rights legislation and anti-lynching legislation.

In Master of the Senate, Caro shows Johnson using all of his political skills to ensure passage of the Civil Rights Act of 1957, which was signed into law by President Eisenhower. It was a weak and watered-down version of civil rights, but it served Johnson’s political ambition — which was eventually to become President of the United States, the most powerful political official in the world.

Caro deals with Johnson’s presidential ambition in The Passage to Power. Johnson ran for the Democratic Party’s nomination for President in 1960, and his principal opponent was Senator John F. Kennedy, whose record of achievement in the Senate paled in comparison to Johnson’s. But Kennedy had his father’s money and a fierce campaign chairman in brother Bobby who was every bit as ruthless as Johnson. As Caro notes, “Old-time politicians — men familiar with the harsher aspects of politics — would talk for years about Bobby Kennedy on the trail of votes his brother needed.” Kennedy won and offered Johnson second-place on the Democratic ticket. Johnson, who as Senate Majority Leader wielded much more power than a Vice President, accepted. Bobby Kennedy hated Johnson, but the Kennedy’s needed Texas — and Lyndon Johnson knew how to win in Texas. The Kennedy-Johnson ticket won the state by 46,233 votes. Texas Republicans charged voter fraud, but the election machinery was in Democratic hands. A Republican petition alleging widespread voter fraud was dismissed by the state canvassing board — all of whose members, Caro notes, were fervent Johnson supporters.

The Kennedy men referred to the new Vice President as “Uncle Cornpone” and “Rufus Cornpone.” Bobby Kennedy, the new Attorney General, took delight in privately ridiculing Johnson and at times publicly humiliating him. Johnson found himself with little influence and no power. That would all change on November 22, 1963. Kennedy’s assassination in Dallas made Lyndon Johnson President. The hatred between Bobby and Johnson intensified. “For a time — three years — one had power over the other, and had used it, used it ruthlessly, used it beyond the bounds of policy, used it to insult and humiliate the other,” Caro writes. “And then, in an instant, in a gunshot, the world of the two men was turned upside down. Suddenly, the other man had the power.”

Caro notes that at Parkland Hospital in Dallas while doctors tried to save President Kennedy’s life, the scene was one of chaos and confusion and hysteria among Kennedy’s men — except for Lyndon Johnson. Johnson was described as “very calm.” He would very soon become the President. This was, Caro writes, Johnson’s “expression of determination and fierce concentration.” He was preparing to take charge. He would soon have all the power he had wanted all of his life. And, after winning a landslide victory over Senator Barry Goldwater in the 1964 election, he would use that power to persuade Congress to pass the Civil Rights Act of 1964 and the Voting Rights Act of 1965, and to vastly expand the welfare state in an effort to create the “Great Society.” And he would use that power to vastly expand U.S. involvement in the war in Indochina — a war, and the reaction to the war at home, that would result in his deciding not to seek reelection in 1968.

Caro’s next volume promises to be the best of them all, and may show Johnson at his very worst as he sends hundreds of thousands of young American men to fight a war that he seemingly had no plan to win and institutionalizes a welfare state — policies whose unintended consequences have led to increased crime, the crisis of African-American families, a dramatic rise in racial tensions, rampant drug abuse in America, riots on college campuses and in American cities, the loss of bipartisanship in foreign policy, the far-left takeover of the Democratic Party, and the beginnings of a staggering government debt that we still deal with today.