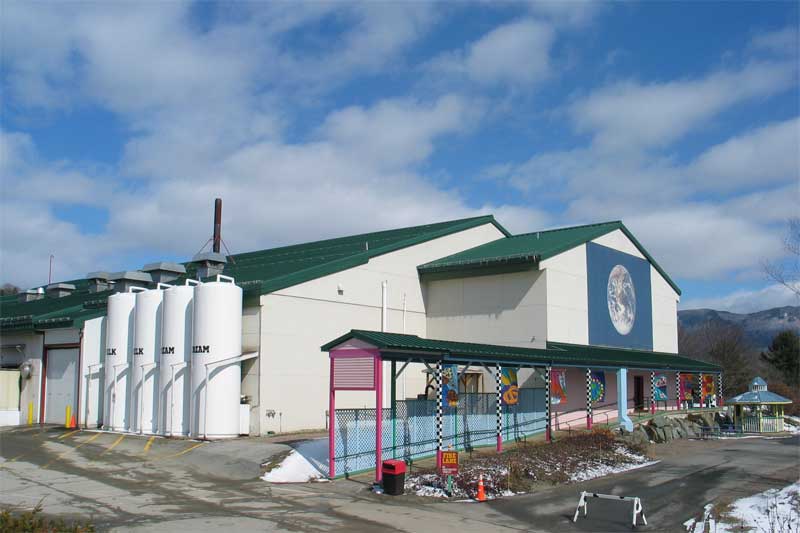 On a recent journey to visit my family in upstate New York, I took a side trip to Waterbury, Vermont.

From 1986 to 1990 I was on the staff of Vermont State Hospital (VSH) there (an experience I wrote about in “Asylum in Vermont: A Memoir” TAS, September 1996), and had not been back to Waterbury in 28 years. After a catastrophic flood related to Hurricane Irene in August 2011 inundated the grounds and damaged buildings, VSH closed (it had been slowly downsizing for years). The remaining patients were transferred to other state facilities, and the hospital complex was renovated by the State of Vermont for office space for state agencies moving from Vermont’s capital of Montpelier, 12 miles away. So the physical swamp was drained, only to be replaced by the administrative one, so to speak. The new state office complex was officially dedicated in 2015.

The day of my arrival the weather was overcast and raw with intermittent rain showers, though the peaking fall foliage was vibrant. I parked in a central location and began walking around town. I passed two of my previous addresses, a brick building with apartments above storefronts on Stowe St., and a house on North Main St. where I’d rented an upstairs apartment. The latter looked much the same, though who owns it is a mystery, as my former landlady passed on years ago.

Soon I was walking the grounds of the old VSH on the same sidewalks where I used to encounter the panhandling Cat Man and other resident characters. The grounds looked much the same with better landscaping than I remember, and the classic institutional red brick masonry seemed a bit brighter (maybe they occasionally power wash it). I took a few photos on my phone. The typical misty gray weather lent to the scene a feeling of authenticity as to how I remembered it.

Vermont is noticeably one of the great redoubts of American liberalism. On Election Day Senator “Crazy Bernie” Sanders cruised to reelection with a 67% landslide over a GOP opponent named Lawrence Zupan. Though even Vermont isn’t quite ready to elect a transgendered governor as Republican Phil Scott was returned to Montpelier with a 55-40% victory over Democrat Christine Hallquist. Ex-Governor and presidential candidate “Howling” Howard Dean is, of course, a regular participant in MSNBC anti-Trump politburo meetings. Speaking of the president, his approval rating in the Green Mountain State is roughly 26%, which is the lowest of any state, including California, New York, Massachusetts, et alia. To look on the bright side, that means one in four Vermonters support his policies. Trump, being an optimist, might see that as something to build on. Look for a Trump rally in Burlington during the 2020 campaign season.

Along with Vermont’s pointy church spires, village greens, and quaint covered bridges spanning chatty brooks, one can see in Waterbury a large banner festooning the front of a handsome colonial home with the simple message of “Resist!” A United Church of Christ church marquee on the lawn in nearby Waitsfield dispenses with the usual uplifting scriptural injunctions, and instead commands passersby to “Reject Racism!” The colorful LGBTQ Pride motif is seen everywhere from store windows to community bulletin boards. The same holds true for pro-immigration and open borders sentiments. In Vermont the Left seems to control the public discourse in, well, public.

True to form (though it post-dated my visit), those legendary venture communists Ben and Jerry have put on the “market” (an odd word to use when writing about them) their new ice cream flavor “Pecan Resist,” all proceeds supporting a handful of far left politico organizations. I drove past the much-improved ice cream factory and radical chic showroom in nearby Waterbury Center where I worked for one week in 1986 before starting employment at the state hospital. It was messy factory production work that I didn’t like, and I quit without notice. In retribution, Ben and Jerry rewarded me by cutting my hourly wage down to $4.50 from $5.00 per hour on my only paycheck. I actually met Ben Cohen that week, and he struck me — despite the mellow hippie public persona — as stern and authoritarian towards his employees, sort of an American commissar of ice cream.

Coincidentally that week, I also met U.S. Senator Patrick Leahy (D-Vt.). Nineteen eighty-six was an election year and the incumbent Leahy was defending his Senate seat against Republican challenger Dick Snelling, eventually prevailing. He showed up for a factory tour one day with a couple of local reporters in tow. Ben Cohen and facilities manager Fred “Chico” Lager accompanied the senator as he wandered around gladhanding us Chunky Monkey-smeared proletarians. Everyone in the production areas was required to wear a green shower cap in order to keep human hair out of the ice cream. Leahy was coiffed-challenged even back then and hardly needed one. Every time I see him on TV, such as when he was part of the Senate Judiciary Brett Kavanaugh inquisition, I picture him wearing that silly green shower cap that made him look like a bespectacled frog.

I listened to Vermont Public Radio (VPR) in the car as I toured my bucolic surroundings. This was during the mid-October post-Kavanaugh swearing-in continuing debate, and the radio dialogue was lively, albeit one-sided. While listening to these ardent Green Mountain feminists you would have thought that American due process was a quaint anachronism. Bored with such propaganda, I switched to WDEV-FM Waterbury-Montpelier for alt-country and jamgrass with a sprinkling of the Grateful Dead. A very hip station. I was so impressed that I now occasionally livestream it at home in Idaho. I’ll give liberals their due: They do radio setlists right.

I visited an old friend from VSH days named Jack Morse (name changed), somewhat stout and grayer, but looking much the same. He’s retired and lives in Waterbury, where he pursues hobbies such as bow hunting for deer, raising dogs for upland bird and duck hunting, and growing marijuana. In 2015, Vermont joined the growing roster of states liberalizing their weed laws, and permits possession of two homegrown plants for personal use by persons over age 18. Selling the stuff is still illegal. “Who’s counting?” Jack laughed, as he gave me a tour of a room in his basement home to an indoors clothesline rack where about twenty plants hung curing upside down. The pungent fragrance in the air stirred memories. It seems the two plants rule isn’t taken very seriously by Vermont cannabis enthusiasts.

Later, Jack and I sat at his kitchen table and reminisced about our state hospital days. More about staff than patients we remembered. I lacked the time to look up anybody else, but discovered a few still resided in central Vermont. Some had caught the retirement train to Florida and other Sunbelt states. And eight were deceased. Five I knew of, but three were a complete shock to me. A motorcycle accident, a suicide, cancer, a couple of heart attacks, etc. Most of these folks were contemporaries of Jack and me. You wouldn’t use the word “old” to describe any of them.

Jack reached for a cigar box on a nearby shelf. He produced a small pipe and a hairy green bud. He asked me if I wanted “a couple of puffs.” I declined and said that for me those days were gone, long gone.

Jack chuckled. And before his lighter sparked, he said: “Bill, some things never change.”