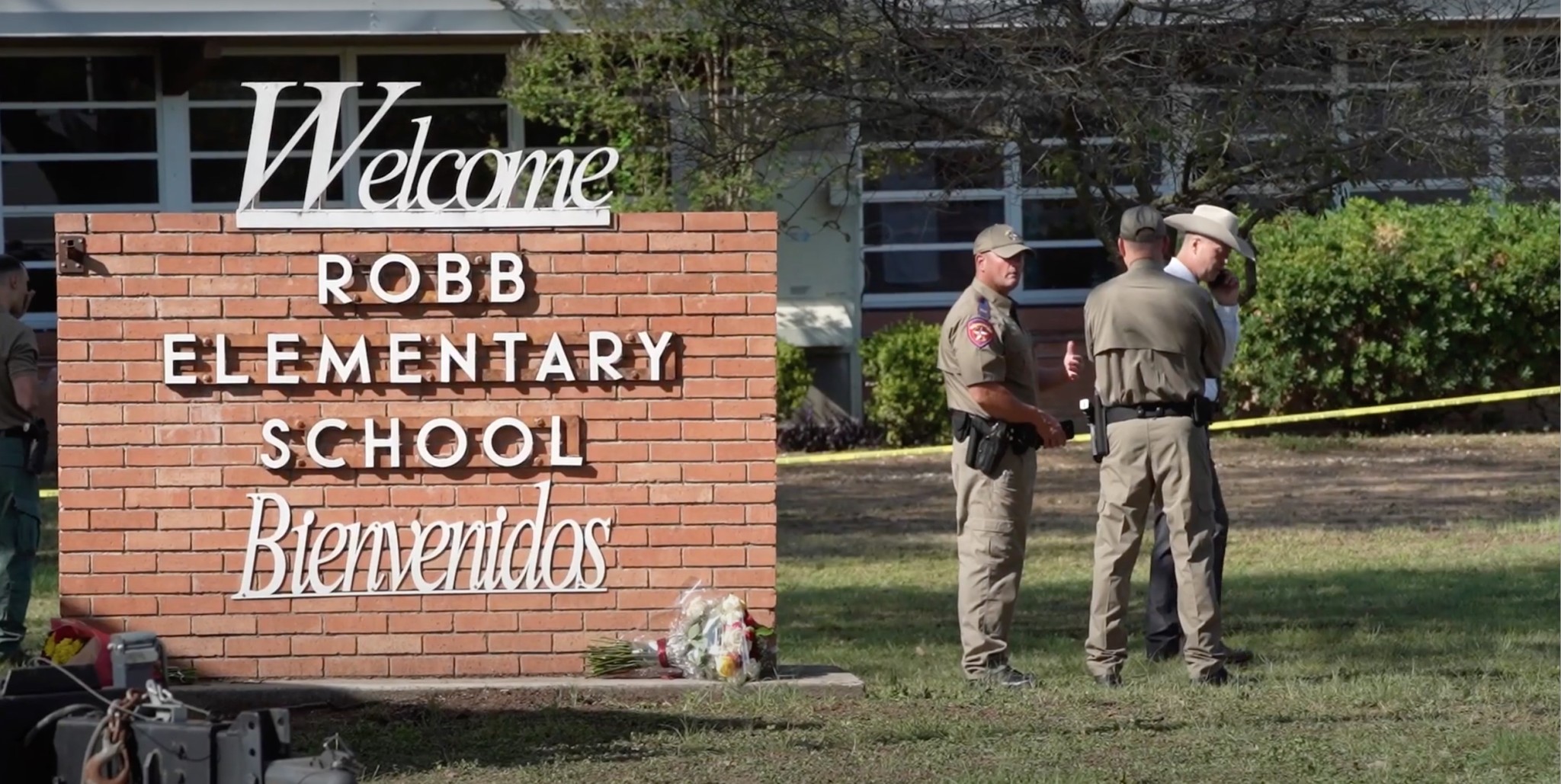 Recent slaughters in the New York City Transit System, in a grocery store in Buffalo, and in an elementary school in Uvalde, Texas, each staggered one on the other with little pause, kindle the nagging sense that the foundations that bind us have, at length, collapsed — that society has lost its soul. Killers seem to lose themselves in a hypnotic ecstasy of violence as if that, and that alone, were the point. Desperation at this bleak state of affairs has pushed at least some past the media myths and political gamesmanship disgorged in the wake of these incidents toward deeper questions. What are the cultural postulates that underwrite the dark phenomenon of Rapid Mass Murder?

The question, if it means anything, presupposes one thing above all: ideas matter — and have consequences. The idea currently raging through institutions of education (universities particularly), media, entertainment, and government (training particularly) is that history is governed by a dialectic of “oppressor” and “oppressed,” and critical race theory is an elaboration of that premise. The idea emerges out of a Marxist framework in which the dialectic applied to class. But as economic realities in freer nations, in which all classes gained in wealth, and mobility — up or down — was common, disappointed the predictions of Marxists, the concept sought refuge elsewhere and has proved remarkably nimble in its application to race, gender, sexuality — even corpulence.

Two features of the theory require some comment. First, the dialectic of oppressor and oppressed allows no nuance. Identity is swallowed by the one or the other or some degree of both. The numbing calculus of intersectionality, a late elaboration of the theory out of which grew the chic injunction to “check your privilege,” maps the degrees. But you cannot be neither. The ferocious determinism of the dialectic exhausts the world — and in a living illustration of theory over practice (ideas really do have consequences) — it explains the peculiar phenomenon of some among the wealthy and successful, steeped in luxury, complaining bitterly about the burdens of oppression by virtue of some accidental feature of birth.

We know to a stunning extent the “who” and the “what” of these events. Yet defeatists want us to believe we cannot prevent them?

Second, and a corollary of the first, is that given that identity is imprisoned within categories of oppressor and oppressed, individuality, freedom, aspiration, and accountability are myths (so much so that the very concepts are dismissed as legacies of white colonialism — lately, in any case). The individual is a social construction, the result of external historical forces beyond his control, a function, strictly, of the system. If you think of yourself as an individual, you are suffering “false consciousness.”

This crusading dialectic forces a terrible alternative: in a world of oppressor and oppressed, what will you be? What will you do? You do not reason with oppressors. You rage against them. You do not debate with oppressors. You overthrow them. You rise up and oppress the oppressors, or “expropriate the expropriators,” in a classic Marxist formulation. When reason and debate are abandoned as relics of colonialism, what alternative remains but violence?

So mobs gather in “mostly peaceful demonstrations,” seething about historical oppression with the unshakeable righteousness of true believers and burn, loot, assault, even kill, all with a wink from media and academia by way of silence, hedging, or excuses. The message is clear: violence is the answer. Finally, the dialectic of oppressor and oppressed can find no other expression. “You have to crack some eggs to make an omelet,” says another menacing bromide out of the Marxist corpus. This is the howling background noise of our culture. So, when sociopaths absorb and churn this zeitgeist through the prism of their distorted minds, random acts of mass murder can’t be truly so very shocking.

A soft defeatism and a loose sense of foreboding attach themselves to the violent ethos of oppressor and oppressed. In the context of Rapid Mass Murder, the defeatism is expressed in the tepid bromide, repeated insistently by “experts,” that incidents of this sort, while tragic, inevitably will happen again. “It is not a matter of if; it is a matter of when” is intoned with affected sophistication but without meaningful argument as to why there must be another “when.”

The weary resignation expressed in “not if but when” betrays a pathological shift in our culture. You would not have heard such things even half a century ago. Optimism and resoluteness were famously steady hallmarks of American character even in dark times. Can you imagine military staff, on the eve of entry into World War II, saying anything remotely like “Look, this is going to be a lengthy, drawn-out contest, the outcome of which is, at best, uncertain. Maybe we will prevail in the long run, but who knows? One thing is certain: we will lose some battles. It’s not a matter of if, it’s a matter of when.” (That does, by the way, seem to be approximately the perspective adopted during the war in Afghanistan — with, perhaps, predictable results.) If that were the tone of our entry into World War II, could we have expected victory? Yet it is the tone of many conversations surrounding the phenomenon of Rapid Mass Murder. Should we expect positive outcomes, then?

We know who is going to commit these acts. They tell us. The sloppy old myth of “nice kid, quiet kid, you never would have known” may stoke the kind of drama that excites viewership, but it has no basis in fact. These killers invariably exhibit a network of behavioral cues that scream trouble. In his book Columbine, Dave Cullen details the stunning degree to which this is true. So, too, Andrew Pollock and Max Eden in Why Meadow Died. The missed inflections are brutal. But the point is not at all limited to the case histories analyzed in those works. In the studies “Protecting America’s Schools” (2019) and “Averting Targeted School Violence” (2021), the United States Secret Service surveys a broad range of mass murders in schools. All of the killers engaged in deeply and noticeably troubling behavior prior to the act. Failure to stop the killers was not a function of not knowing. It was a function of not acting meaningfully on what was known. (READ MORE: Uvalde and the Lessons We Refuse to Learn)

We also know what the killers are going to do. The basic template has not changed since Columbine. The killers march into comparatively unsecured locations that offer a trove of defenseless victims, and they kill until they no longer can. The phenomenon has seen no great wealth of tactical innovation over the years. The killers do now what they did then. The basic architecture bears a stifling sameness.

In brief, we know to a stunning extent the “who” and the “what” of these events. Yet defeatists want us to believe we cannot prevent them? What sense does the “cannot” carry other than marking a lack of resolve? It is not a matter of “if”? In light of known factors, there must be a “when”? Why must there be?

The questions find no sensible responses. But they do hint at inverted priorities. We simply do not focus on prevention despite the screaming warnings. In another concession to defeatism, we rather obsess over mitigation. The obsession follows its own peculiar logic. If there must be a “when,” that is, if you cannot prevent the carnage, you may as well talk about limiting it, about colorful ballistic blankets and bullet-proof glass and single points of entry. What else is there to talk about once you resolve to evade the flagrant network of behaviors that portends sociopathy and violence? The point, of course, is not that mitigation should be ignored. The point is rather that mitigation should not be the primary focus when we know as much as we do about who commits these acts, what they do, and, at times, when they are planning them. Where prevention is possible, mitigation is a dodge.

What is most frustrating about the phenomenon of Rapid Mass Murder is that it is a solvable problem. There is nothing inevitable about it. There is nothing inevitable about anything in human affairs. But under a dominant political orthodoxy that casts society as torn by warring factions of oppressor and oppressed further eroded by fatalism, solvable problems become intractable ones.

Lt. Daniel Modell (ret.) served over 20 years in the New York City Police Department. He is author of The Psychology of the Active Killer and The Warrior’s Manifesto: Ideals for Those Who Protect and Defend.