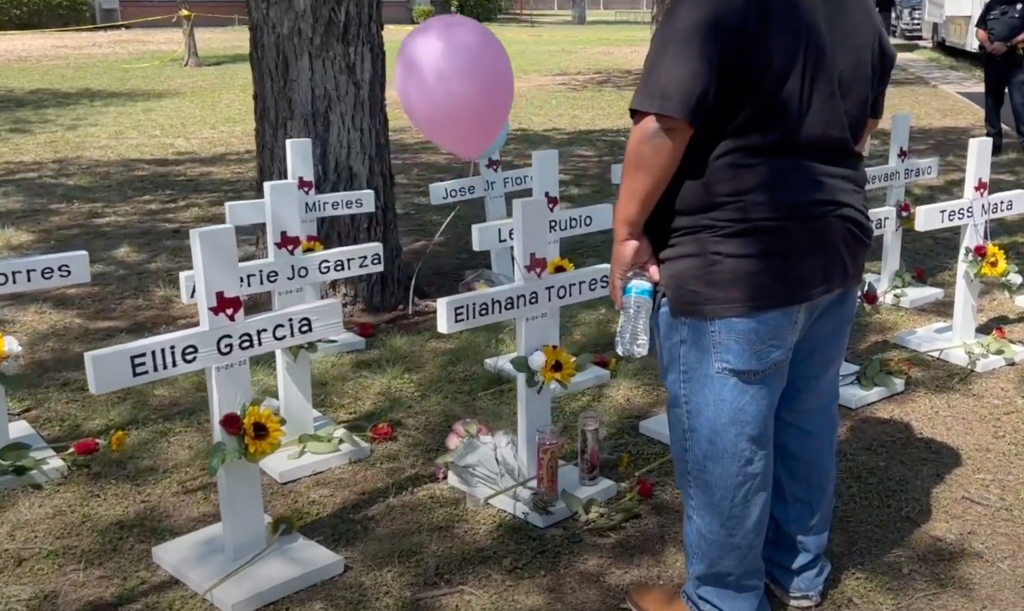 Another school shooting, another horror that on Tuesday in Uvalde, Texas, took the lives of nineteen children and two adults.

The reason these monstrous crimes continue to happen is that America refuses to learn the lessons that reality forces upon us, again and again.

We, as American citizens, are failing to perform the duty of protecting our children. In order to perform that duty, we need to take action, not just mouth “thoughts and prayers.”

There is nothing more important than acting as soon as humanly possible to enter the school and end the shooter’s ability to kill or wound anyone else.

The liberals’ reactions to the Uvalde massacre were entirely predictable. On Thursday, President Biden said, “What in God’s name do you need an assault weapon for except to kill someone?” Biden later tweeted that he wants Congress to pass another “assault weapons” ban, to ban high-capacity magazines, and to impose universal background checks.

Biden’s reactions were ignorant, arrogant, and stupid. There are more than twenty million AR-15 style rifles in civilian hands in the U.S. (and probably five times that many “high capacity magazines” for rifles and pistols). If the owners of those rifles were intent on murder, America would be about as safe a place to live as Mogadishu. It isn’t, because the vast majority of those people abide by the law. Criminals, especially those who are dangerously insane, do not.

Three parts of the solution present themselves readily. First, to make schools hard targets for would-be murderers. Second, to institutionalize those who are insane and dangerous. Third, is to reject liberal nostrums on gun control because they obviously won’t work.

School massacres, like the one that occurred in Uvalde, have been happening for almost six decades. In 1966, Charles Whitman opened fire from the tower of the main building at the University of Texas in Austin and killed fourteen people before police killed him.

I last wrote about the absolute necessity of preventing these killings of children and teachers in the aftermath of the 2012 Newtown school massacre when Adam Lanza first killed his mother, stole weapons she possessed legally, and went to the Sandy Hook Elementary School where he killed twenty-six children and school staffers.

It has been obvious since 1966 that the insanity of the shooters is a primary reason for their crimes. Whitman was as crazy as Lanza. So were all the others. Ramos, the Uvalde killer, was too but his mental problems were not detected before the Robb Elementary School massacre. There are many people — unfortunately, including some faux conservatives — who insist that more funding for mental health programs will help prevent school shootings.

Nonsense. Pouring money on social programs such as employing more social workers to conduct random visits to families and check on “disturbed” people will accomplish nothing. What needs to be done is to change the state laws which effectively prohibit the involuntary institutionalization of insane people who are a danger to the community.

Moreover, psychologists and psychiatrists have a duty to make dangerous insanity more clearly definable — not easier to prove — in commitment proceedings.

State “red flag” laws permit police to confiscate firearms from an individual on the basis of a complaint by police, a family member, or a neighbor. Those laws might be the means of interdicting school shootings but only if they provide due process to the person whose weapons are at issue.

The next lesson is that gun control laws are comprehensively ineffective in deterring or interdicting school shootings. Such laws affect only the people willing to follow them. The killers of school children have no regard for the law.

If gun laws were effective at stopping crime, Chicago — which has some of the most stringent gun laws in the country — wouldn’t suffer between six and a dozen gun murders every weekend. At least 276 children have been shot in Chicago since the beginning of 2021.

The focus on AR-15 style rifles is convenient for liberals but entirely off base. Charles Whitman didn’t have an AR-15 when he murdered those people at UT Austin. He had a bolt action rifle, a pump action rifle, and an M-1 carbine.

A new ban on the sale of “assault weapons” or “high capacity” magazines (those holding ten or more rounds) wouldn’t be effective for any number of reasons beginning with the fact that, as noted above, there are at least twenty million AR-15 style rifles in civilian hands and probably five or ten times that number of magazines with a capacity of over ten rounds.

Liberals want to make such weapons and magazines illegal to own and have the government confiscate them or impose a mandatory “buy back” program. Both would be unconstitutional, so some want to do away with the Second Amendment.

From what we know, the Uvalde killer first shot his grandmother and then drove to the school. According to the Wall Street Journal, Ramos then stood outside the school for about twelve minutes shooting at people in and around a funeral home across the street.

Ramos then jumped over the four-foot high fence around the school and entered through an unlocked door. He went to a classroom in which he killed the nineteen children and two teachers and barricaded himself behind locked doors.

There was no police officer on duty in the school to confront the shooter. Police, who the shooter fired on, waited outside for almost an hour, apparently trying to establish communication with the killer and waiting for more equipment to arrive. Finally, when a Border Patrol tactical unit arrived, that unit rushed in immediately and killed Ramos. (Another report says that the Border Patrol tactical unit was delayed for thirty minutes by local cops who insisted on the delay. That report says that after about thirty minutes, the BP heroes ignored the cops and entered the school.)

People who are most expert at applying violence are usually those who know how best defend against it. One of my best friends is a former SEAL who has trained police to deal with active shooters in schools by running many simulation drills in which he — a major league good guy — or one of his employees plays the role of the bad guy. What my friend says is important and we need to act on his advice.

The first thing my friend insists on is that it was a major dereliction of duty for the cops to wait as long as they did to enter the school. Some of the children and teachers may not have been dead from their initial wounds. They may have died while the cops stalled for nearly an hour.

This is reminiscent of the Parkland, Florida school massacre when the police also failed to enter the school quickly to take out the shooter.

That means that the cops have to act and act quickly regardless of personal risk. It’s their job.

My friend also says we have to spend the money to make schools harder targets for potential child killers.

School boards, and the people who run our colleges and universities, don’t want to spend the money to provide armed officers in each building. They must do so. That means they should have a fully-armed and body-armored officer whose only duty it is to patrol the building and protect the kids. “School resource officers” who teach Johnny and Sally not to jaywalk are nice, but the armed patrol can’t be diverted from the duty to protect the kids.

My ex-SEAL pal points out that a highly-trained police dog could be on duty with each of the armed officers. Those dogs may look scary but they could, and would, attack a shooter on command, willingly giving their lives to stop the killing. Better many dogs should die than a single kid.

Nor do school boards and colleges want to spend the money — as the Israelis do — to build high fences around the schools and require everyone who enters the building pass through a metal detector. In this, they are as derelict in their duties as the Uvalde and Parkland cops who waited outside until the killing was thought to be over. Tall fences and metal detectors can save lives.

The people who run our school systems don’t ensure that the schools have effective lockdown procedures. Did the Uvalde school have one? We don’t know. School officials didn’t even take the trouble to lock the door that the shooter entered through, which should have been done as part of the daily routine.

I have never been in favor of arming teachers, but my friend disagrees. If a teacher volunteers and is well trained, having an armed teacher confront a shooter is far better than nothing. After Uvalde, I have to agree.

There is no higher duty we have than to protect our children. The Dems always say that it’s “for the children” when more money is to be spent on teachers’ salaries and social programs. But they — and we — ignore the fact that fences, patrolling officers, and perhaps armed teachers can save children from being murdered.

It’s long past time for us to learn the lessons that reality keeps teaching us and act upon them. How many more kids have to die before we do?