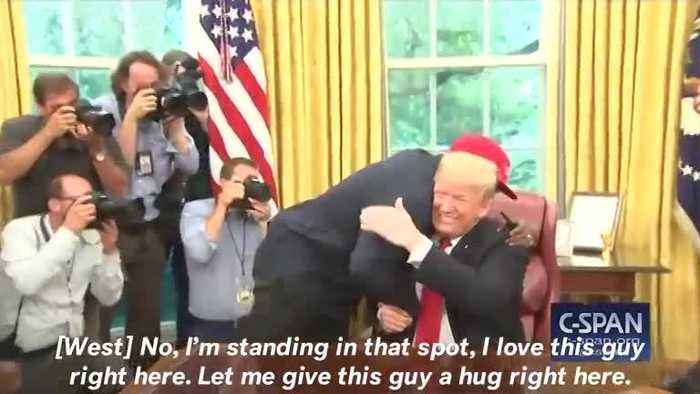 The media-Dem-activist complex hates Kanye West. Gay, black CNN talking head Don Lemon laughed as one of his guests called Kanye West an ignorant Negro. One would think that a man who might be the object of discrimination would hesitate at laughing at racist jibes toward another black person. Wrong.

Donald Trump called Lemon the dumbest man on TV. He should have called him the meanest man. Yesterday, Lemon doubled down on the insults and said that Kanye’s mom is rolling in her grave. Other guests, including S.E. Cupp, shook their pretty heads sadly intoning about Kanye’s mental health (strangely, no one questioned his mental health when he met with President Obama). In short, the media is in full-blown meltdown over Kanye West’s meeting with President Trump and nothing – not racism, mental illness, or even insulting West’s mom – is too low to throw at the man simply for liking the President.

If the hate seems familiar, it’s because there’s been a non-stop spectacle since Trump was elected. Soros-fueled activists rioted during the inauguration and they’ve been rolling ever since. Brett Kavanaugh was accused of rape and subjected to horrendous abuse (abortion). Steve Scalise was shot (health care). Rand Paul attacked by a wacked out neighbor. Mobs of insane leftists clawed at the Supreme Court doors (abortion). Cars and trucks with Trump stickers have been torched (intolerance). Kids wearing MAGA hats have been attacked in fast food restaurants. Senators have been hounded out of restaurants. Wives of elected officials have received death threats. Almost everyone on Trump’s staff needs personal security.

Then there’s the hoary Democrat heads like Eric Holder calling for kicking (don’t worry, Leftists are already on that). Hillary called for more incivility until Democrats get power back. Maxine Waters is telling voters to hound Republicans.

There is a climate of unbridled hate all fomented by the Left, but it’s useful to follow where their hate points. A week ago, it was Brett Kavanaugh. Right now, it’s directed at Kanye West.

Why hate Kanye? Well, Kanye causes the Left trouble. The whole narrative about Donald Trump is that he’s a sexist, racist, homophobe, the paragon of White Privilege, despiser of Hispanics and other people with brown skin. He is the Next Hitler. So the word went out some time back to black people: Don’t talk to Donald Trump. Do not give him legitimacy. And so, there has been a unified hate-front towards Donald Trump. No one would be caught dead crossing the black line lest be labeled a scab.

No one except Kanye and Jim Brown and some other artists. But Kanye is the big one. He’s a cultural juggernaut. He’s been labeled a genius (he is). He’s a self-made man who is a writer, producer, rapper, and clothing designer. Some of the work he produced this year is fire.  Lit. Incandescent. (Full disclosure: I’ve been a Kanye fan for a long time and think his work is getting better as he ages. This is not true of many artists. If you want to listen to one of his best, recent productions listen to the Kids See Ghosts album, which came out in June.) Kanye’s work is aspirational, empowering. And everyone loves Kanye. Well, they did.

For Kanye’s part, he’s returning love for hate. He’s turning the other cheek. But he is having his say. He lectured the Saturday Night Live audience for their intolerant hypocrisy. He wears his MAGA hat in defiance. He repeats the mantra that it’s okay to think differently, be different. He refuses to be hemmed in by the notion of racism. He doesn’t accept the premise.

Kanye’s stance undermines every idea of the Left. Gripped by intersectional politics and the conversations about power and victimology, Kanye shines a light on all the trite psychobabble passing for intellectual leftist thought. He dismisses it, utterly. His life is a testament to its falsity. (So are Jay-Z and Beyoncé’s lives, by the way. If they were so abused by The Man and The System, how did they end up being best buds with Barack and Michelle Obama? How did they become billionaires?)  Kanye sees in Trump a fellow icon. He likes him.

So, the media calls into question his intelligence, his mental health, his mom. He’s just that dangerous.

Also, the media can then dismiss the content of what Kanye says. Kanye touched on the following topics yesterday:

Many folks on the fence about Trump felt revulsion at the spectacle Senate Democrats created with the Ford allegations against Brett Kavanaugh. It was disgusting. I found myself feeling the same way watching how the media condescendingly covered Kanye — dismissing him utterly as though he’s nothing and a nobody.

Don Lemon and his empty-headed commenters have produced zero of value and dare to call Kanye stupid? His work will stand the test of time. Politics be damned, he’s accomplished, talented, hard-working, artistic, and visionary. What has Lemon contributed to art and the business world? How many people has Don Lemon employed?

Kanye can change his mind tomorrow. He can denounce his latest awakening. And he might. It’s never wise to hang political hopes on entertainers and celebrities. It is wise, though, to follow the Leftists’ hate. Their hate is a guide to their fear and their fears bely their weakness. The Left is a delicately contrived fragile castle of grievance. It takes little to reveal it. A word. A song.

Follow the hate. The hate is born of fear. If Kanye is successful at freeing the minds of even a few black people, the Democrat charade ends. He’s dangerous so the Left is trying to destroy him.

Melissa Mackenzie
Follow Their Stories:
View More
Melissa Mackenzie is Publisher of The American Spectator. Melissa commentates for the BBC and has appeared on Fox. Her work has been featured at The Guardian, PJ Media, and was a front page contributor to RedState. Melissa commutes from Houston, Texas to Alexandria, VA. She lives in Houston with her two sons, one daughter, and two diva rescue cats. You can follow Ms. Mackenzie on Twitter: @MelissaTweets.
Most Popular
1
Special Report
The Myth — and Grift — of Long COVID
by Michael Fumento