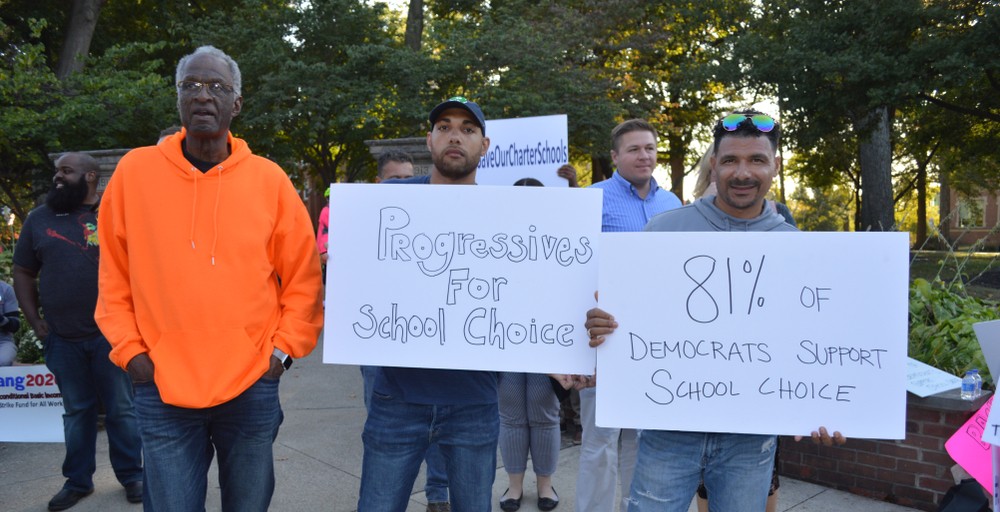 People can choose where to live, work, and shop for goods or services. But few Americans are afforded the opportunity to choose where their children attend school — a more important choice than almost all others. And efforts to expand educational freedom are vigorously opposed by groups with self-serving agendas. To them, parent empowerment is a dangerous enemy to be defeated.

That’s not to say all traditional public schools are failing. But overall, student performance reflects the dire situation. According to The Nation’s Report Card, only 28.7 percent of fourth-grade, 26.4 percent of eighth-grade, and a mere 22.8 percent of 12th-grade U.S. public school students reach basic proficiency levels averaged across seven subjects (civics, geography, mathematics, reading, science, U.S. history, and writing) on the National Assessment of Educational Progress tests.

In other words, more than 70 percent of students fail to reach proficiency in our K-12 public classrooms. Sadly, this is not a new norm, but a reality that has existed for decades. Despite education spending tripling in constant dollars since the 1970s, academic performance has remained stagnant.

COVID-19 has made the situation worse, leading to amplified school-choice efforts. But again, defenders of the status quo have fought back. The Los Angeles Unified School District was not alone in refusing to educate its public school students unless teacher union demands to place a moratorium on charter schools were met.

Thomas Jefferson noted that “an educated citizenry is a vital requisite for our survival as a free people.” We are on a perilous path as a nation if we restrict our upcoming generation from receiving the highest quality education available.

All too often, power and control take priority over the best interests of our children. The lengths to which union and political leaders will go to prevent parents from choosing how and where their children are educated are outrageous. For example, Chicago Public Schools intentionally held 40 schools vacant, costing taxpayers over $2 million a year, to prevent charter schools from buying the buildings. Over the past 17 years, a federally funded scholarship program has allowed low-income students in Washington, D.C., the opportunity to attend private school. Teacher union leaders have fought hard against this voucher program and want to see it eliminated despite the great good it has done by bettering the lives of thousands of children.

Teacher unions pushed to keep traditional K-12 schools closed shortsightedly. Their self-absorbed agenda, aimed at more money and control, was candidly exposed by their outright disregard for students’ needs. Union leaders in major cities across the U.S. refused to reopen district schools until their demands were met. Once schools did begin to reopen, unions blocked a full five-day-a-week return despite placing them at odds with Democratic mayors and governors, who typically play into their hands.

Not surprisingly, over one and a half million students have left the K-12 public education system in a single year. Parents who pulled their students from public schools during the pandemic, in large part, are not making plans to return. Many more parents have disenrolled their students after experiencing a one-year void of quality academic instruction.

Despite teacher union attempts to restrict parental empowerment, since April 2020, general public support of school choice is up to 74 percent, with support by public school parents at an all-time high of 80 percent. Even among Democrats, support of school choice has increased from 59 to 70 percent – a fact that teacher unions would be wise to note.

School-choice initiatives during the past six months have witnessed unprecedented progress. As of May 2021, 30 states had put forth upwards of 50 total school-choice bills to create new or expanded private school vouchers, tax-credit scholarships, and education savings accounts (ESAs).

ESAs are becoming the go-to proposed legislation. As the most flexible school-choice option, ESA funds can be used toward any approved educational expense or saved for college. Five states — Indiana, Kentucky, Missouri, New Hampshire, and West Virginia — have implemented new ESA programs in one year alone. These states join five other states with ESAs already in place — Arizona, Florida, Mississippi, Nevada, and Tennessee (in 2021, Florida and Arizona’s ESA programs were expanded).

The fog has lifted. With remarkable clarity, parents, the public, and lawmakers are realizing the mess unions and education leaders have made by exacerbating an already failing educational system through keeping schools closed and forcing remote learning on students. Combine that with the teaching of extreme ideologies taking predominance in K-12 classrooms, and people are more than fed up.

The verdict is in — it’s time to set parents free, empowering them to choose the education options that best serve their children.

Dr. Keri D. Ingraham is a Fellow at the Discovery Institute and Director of the Institute’s American Center for Transforming Education.