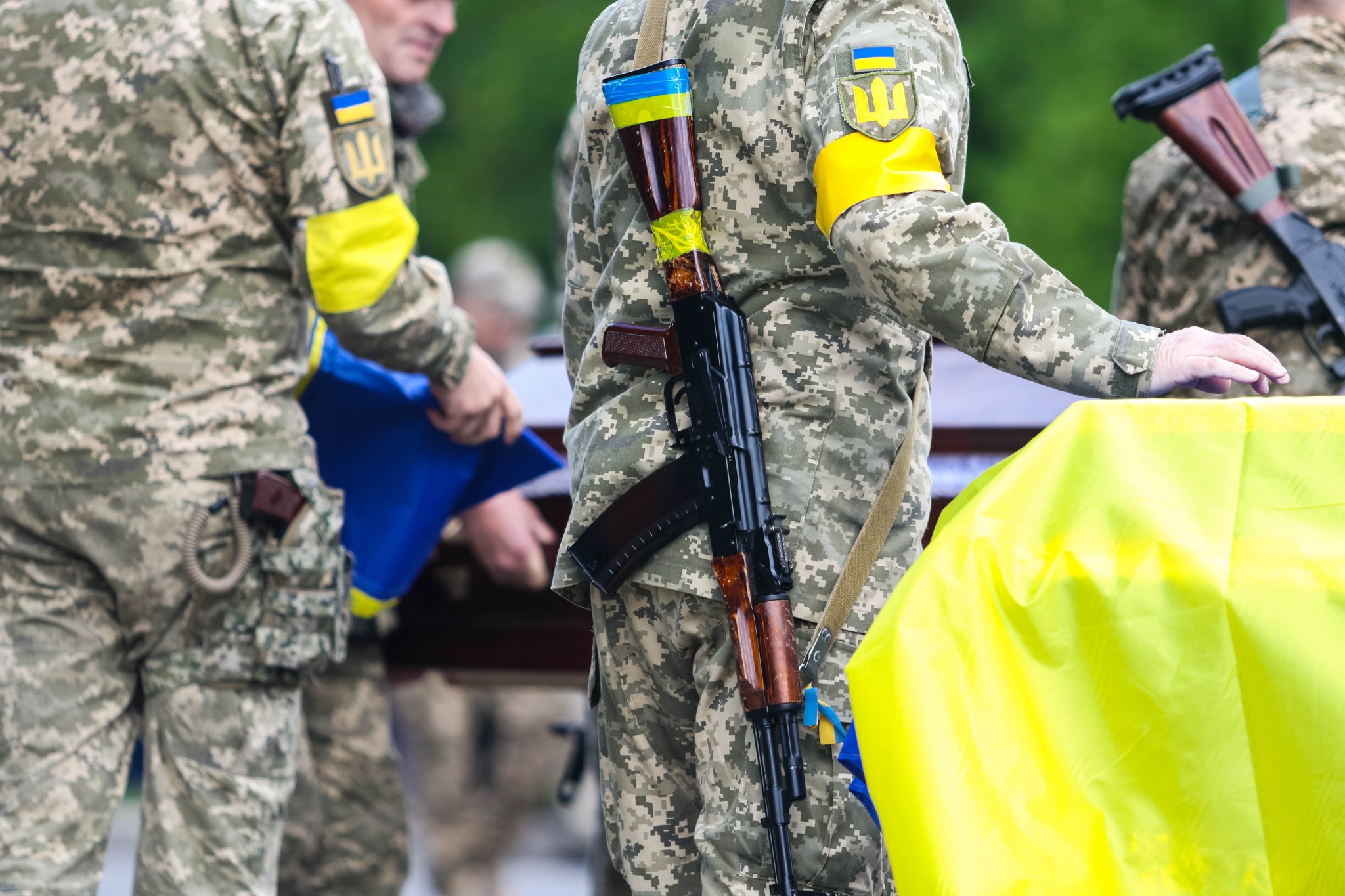 Russia has reached the 10-month point in Vladimir Putin’s war to conquer Ukraine. Putin thought Russian forces would succeed in a matter of weeks or even days, but they suffered one setback after another. Tens of thousands of Ukrainians have been killed both in the fights between the armies and in Russian attacks against civilians.

There’s an awful lot of nonsense going around conservative circles — at least those who pretend to be conservatives — about Ukraine. A few, such as Rep. Marjorie Taylor Greene (R-Ga), famous for confusing the Nazi Gestapo with gazpacho, a tasty Spanish soup, can be disregarded as the fools they are. Greene and others, such as Fox News anchor Tucker Carlson, who is trashing Ukrainian President Volodymyr Zelensky almost daily, are doing their best to thwart any plans to continue aid to Ukraine.

A lot of this nonsense conflates President Joe Biden’s choices — a few good and most bad — about helping Ukraine with matters entirely unrelated to them. For example, a Saturday headline on Breitbart proclaimed, “National Guard to Send Final Paycheck Before Christmas Late as Biden Admin Sends Billions to Ukraine.” Nonsense. As the story said, for those who bothered to read past the headline, the holdup was due to Congress’ idiocy in passing — late — their $1.7 trillion bill funding the government for fiscal year 2023.

Biden’s actions in helping Ukraine comprise the only foreign policy decision he’s made correctly since he’s been in office. There are good and bad aspects of that as well, but Republican critics are falling into the trap Biden fell into in reversing everything former President Donald Trump did no matter how good it was. It’s right to make the rebuttable presumption that because Biden does it, it’s wrong. Regarding Ukraine, that presumption is decisively rebutted by the facts.

President Zelensky is neither Churchill nor Reagan. But any critic has to concede that for a former TV comic who impersonated Ukraine’s president, he’s done a great job standing up to Russia’s aggression.

Zelensky’s speech this week to a joint session of Congress said all the right things. He expressed gratitude to America and recognized the essentialness of our support, without which Ukraine would have certainly been conquered. He said that our aid wasn’t “charity,” which it isn’t for many reasons, not the least of which is that Ukrainian forces are chewing up Russia’s army at a great rate and at great cost to themselves.

Zelensky said, “This battle is not only for the territory, for this or another part of Europe. The battle is not only for the life, freedom, and security of Ukrainians or any other nation which Russia attempts to conquer. This struggle will define in what world our children and grandchildren will live, and then their children and grandchildren.” That’s precisely right.

Think about that for a moment. Russia’s nuclear arsenal is still an existential threat, but Russia’s army no longer is. Ukraine’s battle against Russia is fighting the fight that NATO has supposedly been preparing for since its treaty was signed in 1949.

This war is far from over. Russia is destroying Ukraine’s energy infrastructure even as I write this. Putin aims to freeze Ukraine into submission. He has no interest in peace. Russia is committing war crimes every day against Ukrainian civilians. The likelihood of Russian commanders and troops — and Putin himself — being held accountable for those crimes is essentially nil.

Russia must also be plotting to divert our attention — and NATO’s — from the war, hoping to also divert our aid from Ukraine.

The Serbia-Kosovo conflict was supposedly settled in 1999 by NATO forces by NATO establishing Kosovo as a protectorate. Before that, Kosovo was a repressed province in Serbia, and Serbia, of course, never accepted Kosovo’s independence. In November, representatives of Kosovo’s Serb minority withdrew from its government.

Putin is aware of this. He regards Serbia as a Russian client and is almost certain to cause another Serbia-Kosovo conflict soon, probably before winter’s end. We could soon see another “little green men” campaign in Kosovo like the one Putin mounted in Crimea before Russia conquered it in 2014.

About 3,800 NATO troops are keeping the peace in Kosovo. Putin’s army has failed to conquer Ukraine, but there is nothing to stop another campaign — probably using “Wagner Group” mercenaries, which are funded and operated by one of Putin’s closest allies — from doing what they did in Crimea again in Kosovo. But they can attack Kosovo. What, then, will NATO do?

A revival of the Kosovo conflict would reduce NATO and U.S. aid to Ukraine and deflect our attention from Russia’s war there.

One reason the Republican/faux conservatives argue against further aid to Ukraine is that it is a corrupt nation. It is. They say that Zelensky is enriching himself at our expense. There are credible reports of U.S. small arms turning up on the black market.

But as I’ve written before, the answer to corruption is not to end our support for Ukraine. It would take a very simple act of Congress to create an independent inspector general to probe how our aid is being used. Remember “SIGAR” — the Special Inspector General for Afghanistan Reconstruction? Its reports embarrassed successive presidents by demonstrating that our aid wasn’t creating a new, Jeffersonian democracy in Afghanistan. A similar IG could investigate and expose Ukrainian corruption. And our assistance could continue in a better — and likely far more successful — cause.

I asked a friend of mine about the Republican opposition to further Ukraine aid. He is a retired Marine colonel who spent several months in Ukraine this year and — God bless the jarheads — toting a rifle and fighting alongside the Ukrainians. He told me:

I think it’s patently clear that Ukraine is fighting the war with Russia that we spent trillions over decades preparing for by investing in NATO, stationing U.S. ground and air forces at bases and installations across Europe, and keeping a Navy presence in the Med almost constantly.

In my opinion, when it’s over, Russia will either lose or be degraded to the point it’s no longer a viable threat except in the nuclear realm. NATO’s mission, roles, and capabilities will be altered, and costs to the U.S. taxpayer will be significantly reduced.

My friend estimates that about 50 percent of Russian forces sent to fight in Ukraine have been lost. That is consistent with United Kingdom intelligence. U.K. Defense Minister Ben Wallace said on Dec. 12, “We can say that we estimate over 100,000 Russians are either dead, injured, or have deserted.” That’s consistent with U.S. estimates. Wallace added that Russia has lost 4,500 armored vehicles, 63 fixed-wing aircraft, 70 helicopters, 150 unmanned aerial vehicles, 12 naval vessels, and over 600 artillery systems.

Ukraine’s reduction of Russian military power is very much in our national security interests.

We realize, too, that thwarting one of our principal enemies is worth spending a lot of money. A few loud idiots in Congress and the media shouldn’t drive us to end or reduce our aid to Ukraine.

Support for Ukraine Does Not Come From ‘Current Thingism’

Time for the Private Sector to Step Up for Ukraine

Keep Fighting, Ukraine. You Will Prevail.

The U.S. Must Do Everything in Its Power to Aid Ukraine