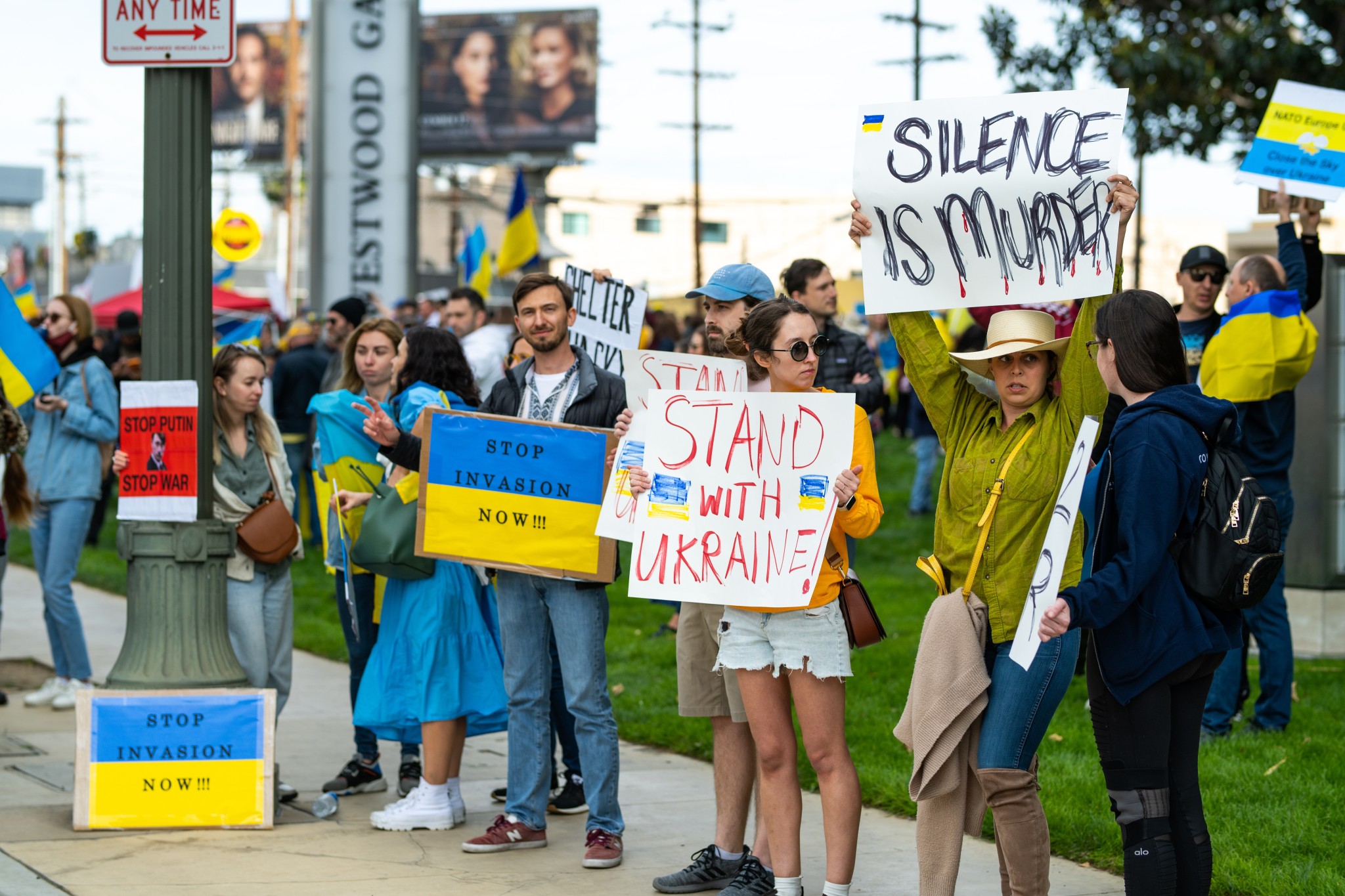 With the arrival of April, we now enter the third month of Russia’s demonic assault on Ukraine. Vladimir Putin’s intentions, reflected by his illegal seizure of the Crimean peninsula in 2014 and continued provocation of a “hybrid” war in Ukraine since then, have never been in doubt. Since assuming dictatorial rule of Russia, Putin has publicly expressed lament for the break-up of the Soviet empire. In his own words, that dissolution represents “the greatest geopolitical disaster of the 20th century.” His intentions are — and have been — quite clear, even when many in the West strangely express bewilderment at his full-scale assault on the Ukrainian nation.

Putin has repeatedly declared that Ukraine may not join the NATO alliance. Here we are permitted to understand Putin’s logic. The alliance, of course, represents the main problem: it is a reminder of Cold War realities — realities that by 1989 broke up the Soviet empire and began the process of former Soviet satellite states achieving their independence and statehood. And despite the 1994 Budapest Memorandum, signed by the U.S., U.K., Russia, and Ukraine, which declared Ukraine’s territorial integrity and political independence, that sovereignty is no more. But not only has Putin reneged, the U.S. and U.K. have as well.

Not only has Ukrainian President Volodymyr Zelensky challenged President Joe Biden as “the leader of the free world” to demonstrate greater support for his nation in these bitter days, but members of the Ukrainian Parliament have also flown to Washington, D.C., to request greater assistance in the war effort. Their message has been simple: ‘We need to prove that democracy matters, that free choice matters, that human rights matter.’ Their request constitutes a sober warning: ‘We can’t have just statements and nice speeches.’ The sad reality is that the West, despite its much-ballyhooed “unity” regarding Ukraine, is more worried about the war’s “escalation” than about the survival of a nation.

Risk, of course, presents itself in different shades. Some risks are patently foolish, some risks inspire cowardice, and some encourage noble self-sacrifice. Among the lessons of the Second World War is that certain risks are necessary for the good of the community of nations. Authentic justice is a non-fluid commodity; it is the same for Californians, Kansans, Kenyans, and Koreans. Where evil and gross injustice threaten the common good — of a local community, a nation, or the community of nations — nations and coalitions of nations possessing the wherewithal to prevent or retard socio-political evil are morally obligated to take the risk of assisting in intervention.

The West is more worried about the war’s “escalation” than about the survival of a nation.

Crimes against humanity, war crimes, and genocide, irrespective of their location, render surrounding nations morally culpable. At the most basic level, of course, those perpetrating such unspeakable acts are guilty and thus responsible. As already noted, Putin intends to destroy Ukraine’s political sovereignty and “return” her to “historical Russia,” irrespective of the human cost. If he cannot do this, he is committed to destroying her people. This, after all, is the modus operandi of despots and dictators. In the 1930s, for example, Stalin’s artificial famine, referred to as the Holodomor (literally, “death inflicted by starvation”), killed millions of Ukrainians, during which time no institution suffered more than the Ukrainian Catholic Church. Leaders and laity alike were persecuted under Soviet rule, with Ukrainian Catholic priests being banished, imprisoned, or executed. And following Soviet re-occupation in 1944, one can speak of an official “liquidation” of the church by 1946.

In the case of present-day Ukraine, the question to be determined is whether Western nations — chiefly, the U.S. and NATO members — care enough to prevent the needless slaughter of thousands of innocent people and defend the sovereignty of a nation against totalitarian onslaught.

Ukraine, of course, is only the first of several wars that the West can expect to be facing in the coming years. Taiwan will be the object of the next totalitarian assault on freedom, more than likely occurring within the next five years. (And we are naïve to think that North Korea and Iran will not contribute in some form to international chaos, given their headlong pursuit of nuclear capability.) In this regard, we should not lose sight of the public declaration made by Putin and Chinese dictator Xi Jinping at the opening ceremony of the recently concluded Winter Olympic Games in China. The two dictators share significant political goals — foremost, a restructuring of world geopolitics and domination — and took careful aim at the U.S., promising to “counter interference by outside forces in the internal affairs of sovereign countries under any pretext.” Correlatively, China backed Russia’s demand to stop NATO expansion to the east. Moreover, they asserted that “no limits” and no “forbidden” areas stand in the way of their agreement and cooperation. As conditions in both China and Russia tragically demonstrate, both regimes are police states, tolerating zero dissent. Freedom of thought and religious conviction simply may not exist — outside of prison and forced labor camps, that is.

Which illustrates quite graphically why the war in Ukraine is so important and why the U.S. and NATO nations must do everything within their power to aid and defend Ukraine. Totalitarian regimes understand one language. They only respond to strength and deterrence. The language of appeasement, which Western nations have adopted over the last three decades, only emboldens dictatorial regimes. Unwisely, U.S. President Joe Biden has only been able to broadcast to Putin what the U.S. will not do — we won’t escalate the war, we won’t use nuclear deterrence, we won’t assist with a “no-fly” zone, and we won’t provide certain types of military hardware — and this has played perfectly into Putin’s hand. Rather than demonstrate leadership of the world’s most influential democratic nation, Biden has “led from behind.”

What needs to be argued with considerable force in this day of Western weakness and passivity is the fact that the Cold War actually prevented war — whether nuclear or conventional. The Cold war, it needs emphasizing, did not lead to military conflict; it helped avert it. What is needed is, in fact, a new Cold War, by which Western democratic nations demonstrate not appeasement to totalitarian regimes but a deterrent threat in light of our commitment to human dignity and human rights. The reality is that socio-political evil on occasion must be countered, and the innocent will need defending. To deny or ignore this reality is, eventually, to make the whole world unsafe for everyone.

The mindset of morally guided and proportionate deterrence, which formed the backbone of Cold War strategies against the totalitarian threat, is anchored in the tradition of “just war” — a 2000-year-old conversation in the Western cultural heritage that severely qualifies both whether or not to intervene and how to execute that intervention in morally permissible ways. The just war tradition acknowledges the morality of deterrence in the face of socio-political evil. That threat is underpinned by the universal and unchanging character of justice.

One of the important lessons of World War II learned by free nations beckons us at present, given the Hitlerian nature of Putin’s aggression. It concerns the Allied response to Nazi provocation, war-mongering, and genocide. Following a relatively passive initial response by the Allies to Hitler’s annexing of Austria, Czechoslovakia, and Poland in 1938 and 1939, Allied leaders — albeit gradually — realized that appeasement would not keep Europe free. It would, sadly, take years for an adequate Allied response to the frightful dimensions of totalitarian aggression and tyranny from 1938 onward.

At the end of the Second World War, the United Nations was created, with a mission and mandate to “save succeeding generations from the scourge of war, which twice in our lifetime has brought untold sorrow to mankind.” From its inception, the UN’s goal was the protection of basic human rights. With the passage in 1948 of the Universal Declaration of Human Rights and the 1949 Geneva Conventions, the nations of the world for the first time were being challenged to reconcile military ethics with human dignity and human rights. Of particular significance was the UN General Assembly’s passage of the Convention on the Prevention and Punishment of the Crime of Genocide in 1948. This convention codified universally and comprehensively the moral obligation of nations to prevent — or intervene to prohibit — the deliberate murder of a people.

In early March, after two weeks of Russia’s assault on Ukraine, the former chief of the economic section at the U.S. Embassy in Ukraine publicly declared anger and shame — anger given the genocidal slaughter going on in her father’s homeland, and shame because the U.S. “could do much more to stop this indiscriminate slaughter.” Her anger and shame are justified and need echoing. Not only can “much more” be done, but much more must be done in the coming days. Putin, we can be assured, will continue bombing and laying siege to Ukrainian cities, especially given the resilience of Ukrainian resistance thus far. After all, the rape and murder of the civilian population are central elements in a dictator’s war strategy.

Rightly has Rep. Victoria Spartz, the only Ukrainian-American member of the U.S. Congress (R-Ind.), publicly lamented, “This is not war. It is genocide of the Ukrainian people.” Her warning was sobering, almost mournful: should nations possessing the wherewithal to prevent or inhibit genocide not act, “this blood of many millions of Ukrainians” will be on their and our hands as well. One need not be Ukrainian to acknowledge this unsettling truth.

J. Daryl Charles, Ph.D., serves as an affiliate scholar of the John Jay Institute and a contributing editor of Providence: A Journal of Christianity and American Foreign Policy, and has served as the Acton Institute Affiliated Scholar in Theology & Ethics. He is co-author of The Just War Tradition: An Introduction (2018, ‎ Intercollegiate Studies Institute Books) and co-editor of America and the Just War Tradition: A History of U.S. Conflicts (2019, University of Notre Dame Press).