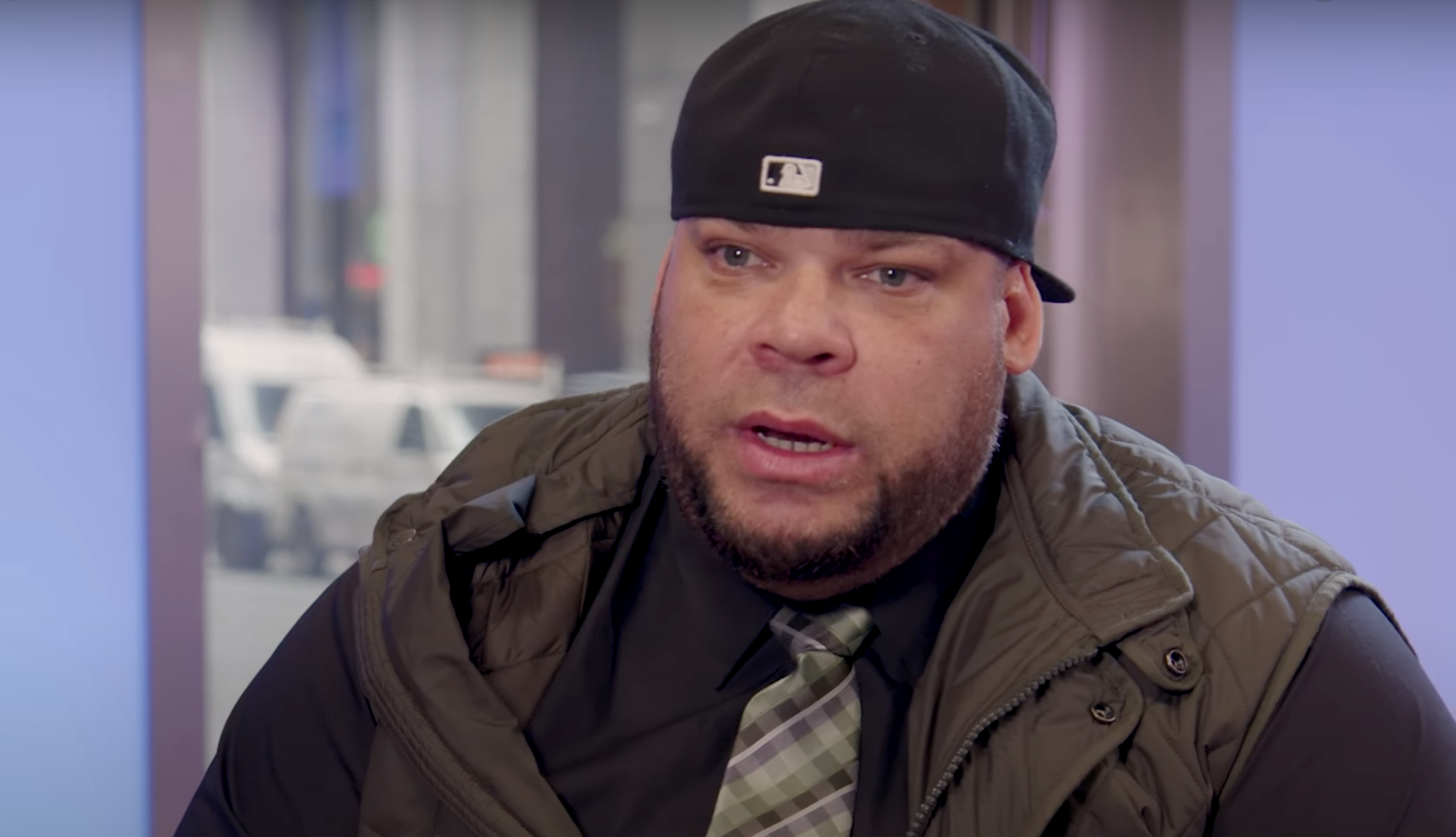 As I write this, the best-selling book on Amazon is Just Tyrus, a memoir by the 6-foot-8, 370-pound regular of that name on Gutfeld!, Fox News’s popular 11 p.m. panel show. Frequent Gutfeld! guests include novelist Walter Kirn (Up in the Air), TV producer Rob Long (Cheers), and sundry journalists and Beltway types. Tyrus, born in 1973 as George T. Murdoch and given the moniker Tyrus during his years as a professional wrestler, came to Gutfeld! by a different route than his colleagues — a route that he retraces here in colorful, funny, perceptive, and sometimes deeply moving detail.

He started out in the projects of Lynn, Massachusetts, the older of two sons of a hippie-dippy white “waif” and a wife-beating black trucker. As a toddler, George hid under the bed every time his dad came home. At 4, he tried to protect his mother by charging at his old man with a kitchen knife — whereupon she had to save him from being thrown out of a 32nd-story window. The next day, the “waif” and her boys were rescued by her father, who — unwilling to have black children living in his lovely house by a lake — arranged for a foster home.

The boys’ foster parents, Ann and John, were, in Tyrus’s view, his first real mother and father, running a home that had “structure and rules” — and love. But George had, as he puts it, something of his father in him, and one day he sent Ann to the hospital by hitting her with a barstool. In response, John whipped him — a punishment for which Tyrus is still grateful because it taught him a lesson he’d never forget about “[t]rust, respect, dignity, decency, and responsibility.”

On its simplest level, Just Tyrus is a highly engaging American rags-to-riches tale.

Remarkably, despite the barstool incident, Ann and John loved the boys and wanted to adopt them. But soon they were back with mom, this time in California, where, plainly having failed to learn from her marriage to their father, she shared her bed with a gallery of rogues. When she finally met a good man who asked to marry her and give her sons a real home, she blew him off in favor of a creep named Craig — who, during George’s teens, brutalized him several times, smashing in his teeth and inflicting a burn that left a lasting scar. But the day of reckoning finally came: when George was 15, Craig insulted his girlfriend, and George, now a 6-foot-5 linebacker, beat him to a pulp.

George spent the next two years as a “couch surfer.” He attended junior college and got a B.S. in special education at the University of Nebraska. A brief foray into drug dealing ended when a girl he respected told him off: “You’re an athlete. There’s people that looked up to you. And look at you now. You’re just a no-good drug dealer.” There followed jobs at Pizza Hut, at a group home for troubled teens, and as a recreational therapist and substitute teacher. A leg injury destroyed his hopes for a life in the NFL.

But then things started looking up. A bouncer gig led to steady work as a bodyguard for Snoop Dog, which in turn led to an on-and-off-again career as a WWE wrestler. He met celebrities like Mike Tyson (“Sweet guy, always paid for everybody with him”) and Prince (who was so tiny that there was only one safe way to escort him through a mob of fans: “I picked him up and basically put him on my hip like a three-year-old and began walking him through the crowd”). Visiting Snoop’s youth football camp, George began offering the kids casual tips and ended up as coach of the year — an accolade that brought him to tears: “To know that people had faith in me like that and respected me and trusted me with young people made a huge difference in my life.” It was during one last wrestling stint — this time with Impact Wrestling, not the WWE — that he acquired the nom de guerre Tyrus. And then came Gutfeld’s phone call.

On its simplest level, Just Tyrus is a highly engaging American rags-to-riches tale. It’s also the most impressive book I’ve read in a long time, whether fictional or factual, about the development of one man’s character. (If it were a novel, it would qualify as a Bildungsroman.) In addition, it’s the story of a boy who, stuck in his childhood with deplorable male role models, kept seeking them elsewhere. Yes, some of the men he met were racists — about which he doesn’t mince words. At university, he had to hide under the bed — just as he’d done as a toddler when his dad came home — because his girlfriend’s father, who’d suddenly shown up, didn’t know his daughter was dating a black boy. And his grandfather’s bigotry still stings. (He once heard gramps telling the “waif” that she was lucky to be with Craig: “You’ve … had children with a Black man. The fact that any white man would have you at all is a blessing.”)

Yet Tyrus is also frank about the fact that the major blight on his life hasn’t been racism but the abusiveness of a father who happened to be black and of a stepfather who happened to be white. Because of these bad men — and this is the most touching thing about this book — he’s spent his life striving to be a good man, a “real man.” By which he doesn’t mean being an intimidating bouncer and bodyguard, able to bench-press 300 pounds and carry a rock star around like a toy, but being a loving husband and father, a loyal friend, a reliable employee, and a responsible citizen.

Fortunately, he did meet men who helped show him the way. In high school, a history teacher from the South — “a Southern gentleman if there ever was one” — took him under his wing, telling him: “Son, whatever happens in life, they can never take away your work ethic … Hard work always pays off. Always.” In junior college, a coach taught him the value of being “a well-rounded man.” Visiting a friend’s family in Texas, he was so impressed by them that he “made a lot of mental notes … in the hopes that one day, I’d be a decent parent and a good family man.”

And there were others who contributed to the creation of the Tyrus we now know. The acknowledgments at the end of this book are a veritable roll call of some of them. The acknowledgments end with an expression of gratitude — of all people — to his father: “Dad, thank you for never being there. Thank you for never showing me your ideals of manhood or a hard day’s work or how to treat women or your own children. Thank you for not being there. Being if you were there I’d be just like you … I learned from other men. I embraced accomplishments and accountability and I’m better in life than you could ever understand.”

This is, then, the story of a man who had a perfectly horrible childhood, a spotty education, and a uniquely checkered CV — but who, thanks to his extraordinary native intelligence and a strength of character that, under the influence of his many mentors, grew steadily over the years, was able to draw lessons from his life experiences that ultimately, at Fox News, put him on a par professionally with men and women who had blue-chip pedigrees and Ivy League diplomas. Every time he opens his mouth on Gutfeld!, you can see he’s no token — he deserves to be on that stage; he’s right up there with the best of them.

Often, in fact, he’s the panelist on Gutfeld! who, owing to his remarkably varied life experience and the countless hours that he’s obviously spent reflecting on that experience, gets closest to the heart of the issue under discussion, answering questions with a singular nuance and passion — and, moreover, with an unwavering honesty that one could wish was the rule rather than the exception among cable-news commentators. In Just Tyrus, he’s given us a beautiful, inspiring book that fully deserves its spot at the top of the Amazon list.