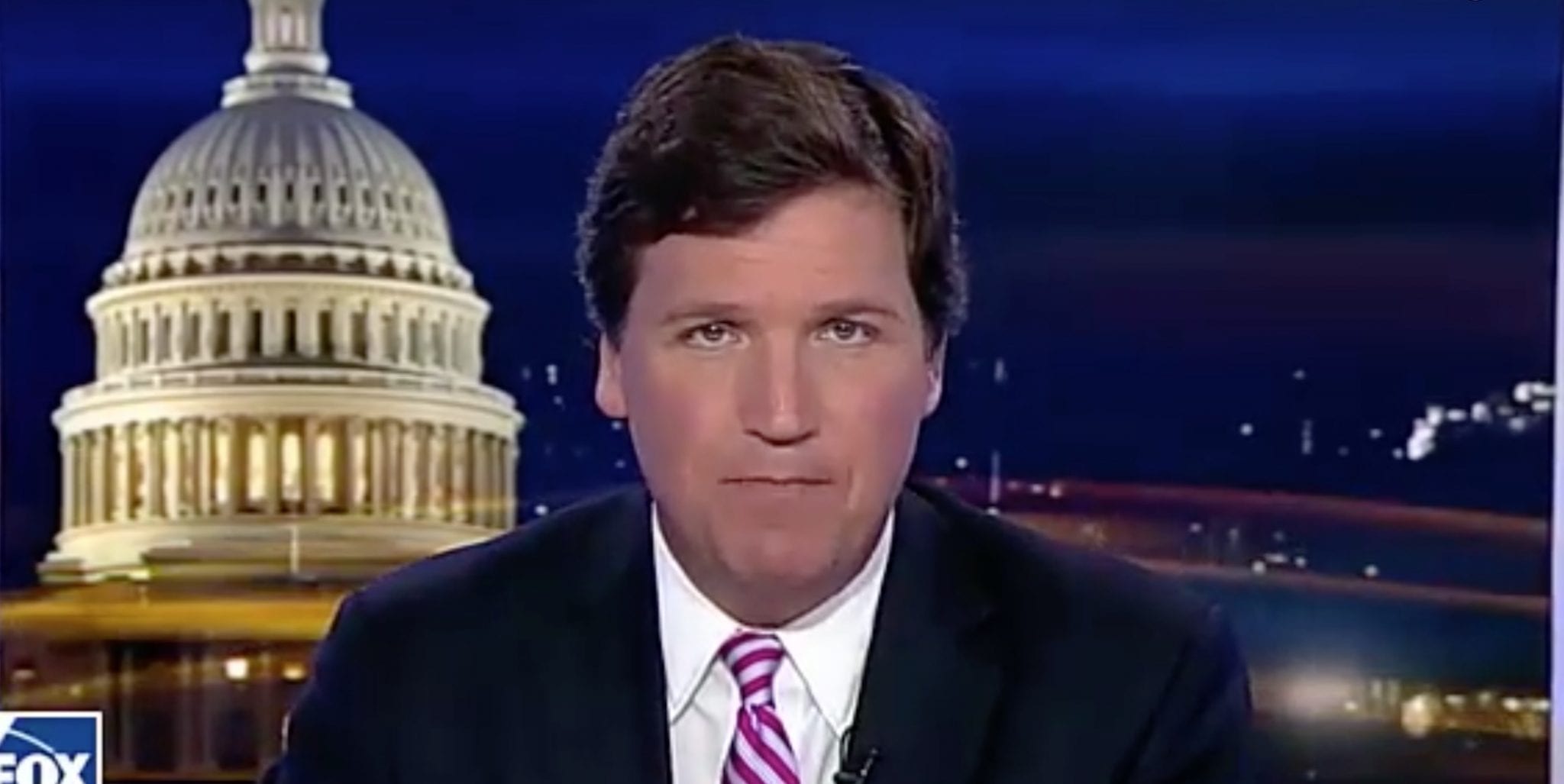 A truer examination of a serious American problem could not be had.

In his new book,  Ship of Fools: How a Selfish Ruling Class Is Bringing America to the Brink of Revolution, Tucker Carlson gets to the heart of the seriously bad situation that confronts America.

Ship of Fools is, says the opening flap of the book, “the story of the new American elites, a group whose power and wealth has grown beyond imagination even as the rest of the country has withered. The people who run America now barely interact with it. They fly on their own planes, ski on their own mountains, watch sporting events from the stands in skyboxes. They have total contempt for you.”

In thumbnail, that could not possibly be a more accurate description of American elites, not to mention the reaction they produced: the election of Donald Trump. As someone who long ago left the precincts of Inside the Beltway Washington, D.C. to come home to the wilds of Central Pennsylvania, it was plain what was coming down the pike in November of 2016. This area was awash in Trump signs. They were everywhere, even hand-painted on the sides of barns. As it were, this was a sure sign of what Tucker describes this way:

Trump’s election wasn’t about Trump. It was a throbbing middle finger in the face of America’s ruling class. It was a gesture of contempt, a howl of rage, the end result of decades of selfish and unwise decisions made by selfish and unwise leaders. Happy countries don’t elect Donald Trump president. Desperate ones do.

On page after page Ship of Fools discusses the problems that millions of Americans have long since grasped — sometimes without even formally being aware just what they were coming to understand. Among them:

• “a meritocracy” that is about the business of creating “its own kind of stratification, a kind more rigid than the aristocracy it replaced.”

• Apple, on the one hand, has an astounding record of iPhones being assembled in China by Foxconn, “a Taiwanese company that is the biggest electronics manufacturer in the world.” That would be workers making less than two dollars an hour, and who report “being forced to stand for twenty-four hours at a time” with others “beaten by their supervisors.” On the other hand, the company gets a pass because “like virtually every big employer in American life, has purchased indulgences from the church of cultural liberalism. Apple has a gay CEO with fashionable social views. The company issues statements about green energy and has generous domestic partner benefits. Apple publicly protested the Trump administration’s immigration policies. The company is progressive in ways that matter in Brooklyn. That’s enough to stop any conversation about working conditions in Foxconn factories.” Concern about this from the American ruling class? Zero.

• Then there’s Uber, presenting itself to the public with the same liberal wokeness as Apple. But in reality? In reality Uber’s more than one million drivers “would make Uber the second-largest private sector employer in the world.” Ahhhh but there’s a catch, which the book zeroes in on. “But employees are expensive, they require vacation days and health-care benefits. They have rights. In the United States, employees receive unemployment insurance, and they are entitled to compensation for on-the-job injuries.” But does Uber do these things? Of course not. By playing a game that says their drivers aren’t employees but rather “contractors,” like a small independent business — Uber escapes these responsibilities.

• And let’s not forget Facebook. In perhaps the most frightening section of the book, Tucker details the degree to which Facebook “continues to gather ever-growing amounts of intimate information about its customers,” something about which “most people have no idea.” Tucker writes:

Use Facebook’s mobile app on your phone? Facebook sees and records everywhere you go. Facebook knows the stores you visited, the events you attended, and whether you walked, drove, or rode your bike. Because Facebook is integrated onto so many other sites, the company also knows much of your Web browsing history as well, even when you’re not browsing on Facebook.

Worse? There is the admission from Facebook’s first president, Sean Parker, that, as Tucker writes, Parker “admitted that Facebook can override the free will of its users. The product is literally addictive. It was engineered to be that way.”

There’s more here on Facebook, much more that will raise the hair on the back of readers’, not to mention Facebook users’, necks. And much more to Ship of Fools. There is a thorough-going discussion of Cesar Chavez who founded the United Farmworkers union in the 1960s. As a serious Bobby Kennedy fan in that time-period, I well recall Chavez and RFK’s alliance with him that made repeated headlines in the day. What Tucker reminds here is that there was no stauncher opponent of illegal immigration than the then-liberal hero Cesar Chavez. Chavez went to incredible lengths to fight the problem, even going to the extent of having his union members out “intercepting Mexican nationals as they crossed the border and assaulted them in the desert. Their tactics were brutal: Chavez’s men beat immigrants with chains, clubs, and whips made of barbed wire. Illegal aliens who dared to work as scabs had their houses bombed and cars burned. The union paid Mexican officials to keep quiet.” Which is to say, Cesar Chavez on illegal immigration makes Trump look like a wimp. And this being a Tucker Carlson book, there is the humorous irony as he notes that Cesar Chavez, who died in 1993, is so revered by liberals surely unaware of his actual position on illegals that there is a California state holiday named for him, along with all manner of schools, libraries, highways, and one college.

Not spared in this book — as well they should not be — is the GOP Washington Establishment. Tucker lasers in on outgoing Speaker Paul Ryan, saying that he has been a leader in the open borders movement. He runs through various Ryan actions that made clear “Republicans in Congress don’t care about the territorial integrity of the country.”

This is a superb book, filled with eye-popping information on just how today’s American ruling class conducts itself. As soon as the book appeared, it shot to the top of the bestseller lists, as well it should.

A word here about the author. In the headlines the other day was a tale of Antifa thugs gathering outside the Carlson home — he was at the Fox TV studio — yelling and screaming as an attempt was made to knock down the front door, damaging it as Tucker’s wife, fearing a home invasion, hid in the pantry calling the police.

This in fact was just one more incident in a list of similar attacks made by mobs of fascist-minded thugs who have made it their business to go after any recognizable conservative or Trump supporter across the country. It takes courage to go on the most popular cable network night after night and stand up for conservative values in an atmosphere where the Left is in a furious fight to gain permanent power and privilege over their fellow Americans. Tucker Carlson — like his colleagues Sean Hannity and Laura Ingraham — thankfully have that courage in spades.

Violence is in the DNA of the American Left — and it always has been. From the use of the Ku Klux Klan as the military arm of the Democratic Party to labor violence, the 1960s Weather Underground and anti-Vietnam War protests, not to mention the window smashers of Occupy Wall Street and now the hooded thugs of Antifa, the Left’s instinctive use of violence has never changed. It is imperative to understand that this is, indeed, straight-up fascism. Antifa — and those who defend them in the liberal media and the Democratic Party and in scores of venues across the country, college campuses notably — need to be called out for what they are. “Antifa” is, in reality, “Profa” — pro-fascist, not anti-fascist. They are the philosophical descendants of Mussolini’s “black shirts” — with the addition of hoods to hide their paramilitary faces. And when they show up and physically attack someone’s home, they should be tracked down, arrested, and prosecuted to the fullest extent of the law.

It is amazing — and I have written on this subject a great deal in this space — that to believe in a colorblind America as Tucker Carlson does, to oppose identity politics, the latter which I have long since termed the son of segregation and grandson of slavery because it is, in fact, racist — is to be accused, of all ridiculous things, of “white nationalism.” It should not escape that the Carlson accusers on this score have a serious projection problem.

As Ship of Fools makes crystal clear, Americans face a serious problem in dealing with this cast of characters who populate the American elites. These elites do indeed hold millions of Americans in contempt — and the election of Donald Trump was the answer. But Donald Trump will not be president forever, and, as Tucker points out, “if you want to save democracy, you’ve got to practice it.”

Jeffrey Lord
Follow Their Stories:
View More
Jeffrey Lord, a contributing editor to The American Spectator, is a former aide to Ronald Reagan and Jack Kemp. An author and former CNN commentator, he writes from Pennsylvania at jlpa1@aol.com. His new book, Swamp Wars: Donald Trump and The New American Populism vs. The Old Order, is now out from Bombardier Books.
Most Popular
1
Special Report
What in the Hell Is the Penn Biden Center?
by Paul Kengor