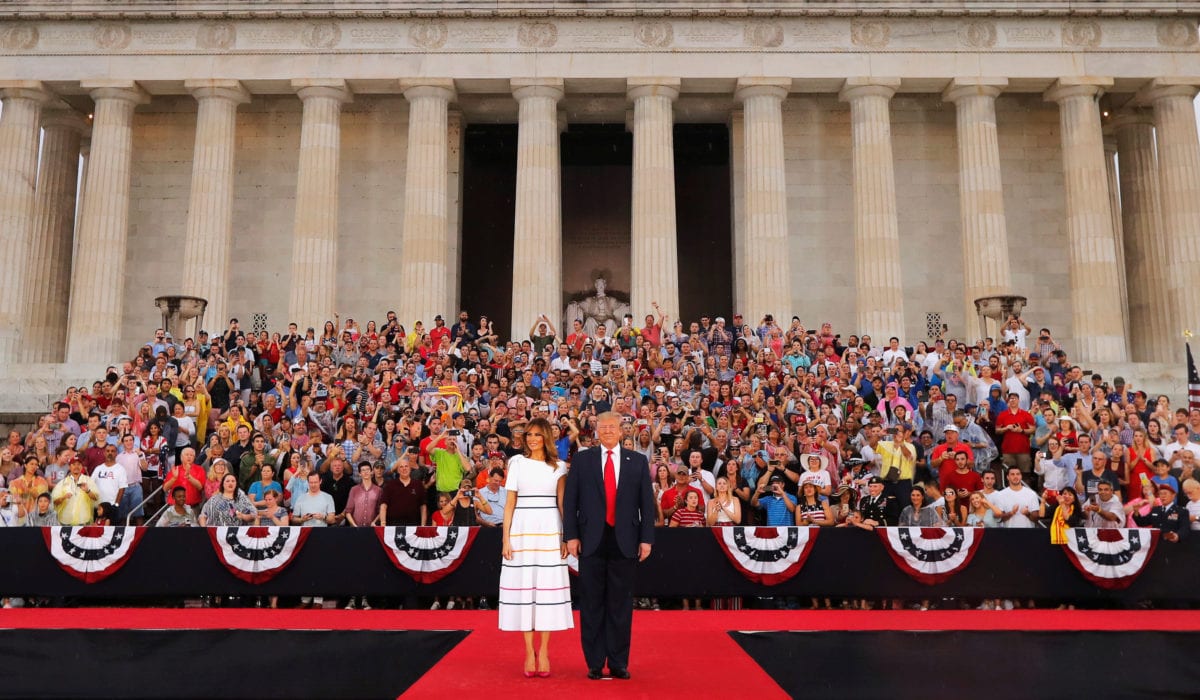 The president’s Fourth of July speech was a triumph.

The amazing thing is the willful if inevitable self-sabotage of liberal-media credibility as they trashed the speech before it even happened — making up history as they went along.

To pick just one example, there was The Washington Post’s Eugene Robinson looking the MSNBC camera in the eye and asserting of the then-forthcoming Trump celebration of the Fourth of July:

This was, of course, blatantly false. Presidents speak on the Fourth of July all the time — and have very frequently done so.  A little research and, sure enough, the list of presidents who gave Fourth of July speeches includes Woodrow Wilson, John F. Kennedy, Richard Nixon, Gerald Ford, Ronald Reagan, Bill Clinton, and Barack Obama.

And parades of military hardware and equipment? As mentioned in this space previously, they have happened all the time under various presidents. Whether it was tanks parading through Washington to celebrate FDR’s third inauguration in 1941  or Pershing missiles at JFK’s inaugural, the list of presidents who have celebrated parades with military hardware is considerable.

But that’s not what Eugene Robinson and many of his liberal-media compadres want Americans to think. And now that the celebration is over?

It is crystal clear that this Fourth of July celebration was (another) Trump triumph. As the crowd photos posted at Breitbart illustrate, the capital was absolutely packed with Americans who loved the president’s idea of a national celebration of America and what it stands for. On a scale of one to ten, the Trump speech was a 100 — a home-run recounting of exactly why it is that so many Americans love America.

Among other things, the president said this:

Today, we come together as one nation with this very special Salute to America. We celebrate our history, our people, and the heroes who proudly defend our flag — the brave men and women of the United States Military. …

As we gather this evening in the joy of freedom, we remember that we all share a truly extraordinary heritage. Together, we are part of one of the greatest stories ever told: the story of America. It is the epic tale of a great nation whose people have risked everything for what they know is right and what they know is true. It is the chronicle of brave citizens who never give up on the dream of a better and brighter future. And it is the saga of thirteen separate colonies that united to form the most just and virtuous republic ever conceived. …

Devotion to our founding ideals led American patriots to abolish the evil of slavery, secure civil rights, and expand the blessings of liberty to all Americans.

This is the noble purpose that inspired Abraham Lincoln to rededicate our nation to a new birth of freedom and to resolve that we will always have a government of, by, and for the people.

Our quest for greatness unleashed a culture of discovery that led Thomas Edison to imagine his lightbulb, Alexander Graham Bell to create the telephone, the Wright Brothers to look to the sky and see the next great frontier. For Americans, nothing is impossible. (Applause.)

Exactly 50 years ago this month, the world watched in awe as Apollo 11 astronauts launched into space with a wake of fire and nerves of steel and planted our great American flag on the face of the moon. Throughout our history, our country has been made ever greater by citizens who risked it all for equality and justice. One hundred years ago this summer, the women’s suffrage movement led Congress to pass the constitutional amendment giving women the right to vote. (Applause.)

In 1960, a thirst for justice led African American students to sit down at the Woolworth lunch counter in Greensboro, North Carolina. (Applause.) It was one of the very first civil rights sit-ins, and it started a movement all across our nation.

Clarence Henderson was 18 years old when he took his place in history. Almost six decades later, he is here tonight in a seat of honor. Clarence, thank you for making this country a much better place for all Americans.

In 1963, Reverend Martin Luther King Jr. stood here on these very steps and called on our nation to live out the “true meaning of its creed” and “let freedom ring” for every citizen all across our land.

It has willed our warriors up mountains and across minefields. It has liberated continents, split the atom, and brought tyrants and empires to their knees.

The speech and the vision of America it summoned were decidedly inspiring.

As expected from the get-go, the same members of the media who insisted falsely that celebrations of this kind had never been done before panned the speech and the event. But over at Rush Limbaugh’s Monday show, back from the holiday, was exactly the kind of reaction that was typical of millions of Americans. Said Rush:

And he called out some of the great Founding Fathers, some of the great events that led to the Founding Fathers being great: The ratification of the Constitution, the Declaration of Independence, the Civil War, any number of things. The critics are saying, “It was eighth-grade and sophomoric.” When you stop and think about it, I was watching it, I was thinking, “Actually, this is pretty good, because it’s stuff that probably isn’t taught much anymore.” And it was relatable to everybody.

It was a tribute to all of the branches of the United States military, featuring either armaments such as tanks, Bradley vehicles, helicopters, stealth bombers, fighter jets, the F-22 Raptor, the Blue Angels. And, folks, I have to tell you, by the time the Blue Angels flew over, which was one of the finale events, I literally — and I haven’t done this in I don’t know how long. I was standing up, and I literally started choking up.

When I start to cry, I try not to. I don’t know why. I just try to choke it back, not cry. (Interruption.) No, no, no, no, no. It’s not “real men don’t cry.” It’s not that. I choke it back. I don’t like crying. I couldn’t stop it. When those jets flew over, I felt an immense pride, and I could envision the pilots in those jets, and I started imagining what it must be like for them to be on that team …

The speech was well constructed, it was chronological, and it was a great history lesson and recounting of how the United States came to be, how we persevered, how we have triumphed, how we have been opposed, the greatness of some of the acts that were required by Americans to survive and triumph and maintain the unity of the nation. …

Then we got media coverage lambasting it, blaspheming it, impugning it, making fun of it, as though it’s somehow childish, somehow nerdy to be proud of your country.

But Rush also had a wonderfully appropriate pushback on all the hysteria over the Betsy Ross flag. Said Rush of Nike and Colin Kaepernick and the withdrawal — at Kaepernick’s instance — of the new Nike sneakers with the Ross flag, the original American flag, on the heels:

Now, a lot of people were irritated by this for a host of reasons. And I was one of them. This is the exact kind of thing that we are up against. There’s nothing wrong celebrating the first flag of this country. There’s nothing racist about it, there’s nothing slave-generated about it. There’s nothing other than a historical aspect of America’s rise to becoming the greatest nation on earth.

It is a significant moment in American history, and it was created by a very significant and great American who is now being sullied, who’s now being trashed along with the rest of the country. And I’m sorry: to me this is simply unacceptable. This is the exact kind of thing that needs to be pointed out and opposed. People need to be educated and informed about this.

So last Thursday I told Kathryn, who runs the Rush Limbaugh Store, “We need a Betsy Ross shirt. How quick can we get a turnaround?” Well, the answer is we have it up and running and we have it ready today, and I want to show it to you on the Dittocam.

Before you ask any questions about obscene profit, all proceeds go to the Tunnel to Towers Foundation. Now, our T-shirts have some of the most incredible fabric. People who get these first remark on the fabric.

Now, underneath the flag says, “Stand up for Betsy Ross,” and then it has the Rush Limbaugh show logo beneath it. It is up at RushLimbaugh.com in the store for pre-order. We’re gonna have them this week to begin shipping to you.

This is perfect. An absolutely perfect response to Nike and the anti-Americanism that has long infected the American Left and is metastasizing daily. Recall well that all the way back in 1984, when Ronald Reagan’s UN Ambassador Jeane Kirkpatrick, a longtime Democrat, spoke at the Republican National Convention about the party she had left to work for Reagan, she bracingly described the Left as the “blame America first crowd.” She was right — and would be even more correct today. Which is why Rush’s Betsy Ross flag shirt is exactly a great way to respond to these people. Bravo!

Nike may well regret playing this game of political correctness with symbols.

Look no further than the company’s name — Nike. Who was Nike? History says that she was the Greek goddess of victory for the ancient Greeks. Uh-oh. The ancient Greeks? Over here at the Encyclopedia Britannica for Kids is this:

It must be remembered, however, that a very large part of the population was not free, that the Athenian state rested on a foundation of slavery. Two-fifths (some authorities say four-fifths) of the population were slaves. Slave labor produced much of the wealth that gave the citizens of Athens time and money to pursue art and learning and to serve the state.

So, in other words? Colin Kaepernick does advertising for a company — Nike — named after the goddess — Nike — who was worshiped by … the slave owners of ancient Greece.

Will Colin Kaepernick now cut his ties with Nike? Will Nike be shamed into dropping its name like it dropped the Betsy Ross sneakers?

Don’t wait up. Hypocrisy is a specialty of the Left.

In the meantime? Take another look here at Fox’s coverage of Trump’s Fourth of July celebration.

And stand up for Betsy Ross.