Pulitzer Prize winner and New York Times notable economist Paul Krugman descends further into spittle-flecked madness. Since Donald Trump won the election, the Keynesian has been breaking mental windows all over the place. It’s not helping his psychological economy. Today, he may have reached peak Krugman, but that’s not certain.

Thought: There was (rightly) a cloud of illegitimacy over Bush, dispelled (wrongly) by 9/11. Creates some interesting incentives for Trump

Yes, you read that right. Mr. Krugman implies that Donald Trump will manufacture a terrorist attack ala 9/11 with George W. Bush in order to get some legitimacy. He actually tweeted this for the world to see. 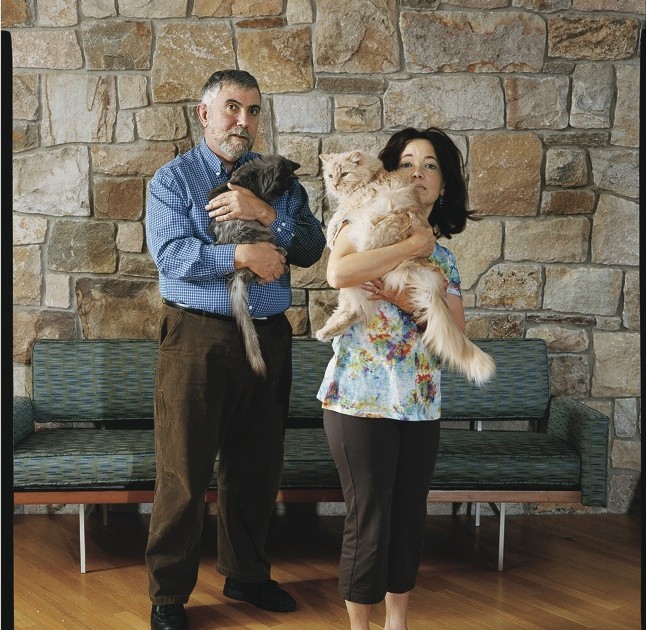 Today, Mr. Krugman writes that the Republican party is to be the end of the Republic. The last eight years are already fog on the wind, lost to the mists of time. (That florid sentence is sober compared to the breathless writing of Mr. Smugman.) Here’s the subtle title, How Republics End:

Why is this happening? I’m not asking why white working-class voters support politicians whose policies will hurt them — I’ll be coming back to that issue in future columns. My question, instead, is why one party’s politicians and officials no longer seem to care about what we used to think were essential American values. And let’s be clear: This is a Republican story, not a case of “both sides do it.” [Bold added throughout.]

So what’s driving this story? I don’t think it’s truly ideological. Supposedly free-market politicians are already discovering that crony capitalism is fine as long as it involves the right cronies. It does have to do with class warfare — redistribution from the poor and the middle class to the wealthy is a consistent theme of all modern Republican policies. But what directly drives the attack on democracy, I’d argue, is simple careerism on the part of people who are apparatchiks within a system insulated from outside pressures by gerrymandered districts, unshakable partisan loyalty, and lots and lots of plutocratic financial support.

For such people, toeing the party line and defending the party’s rule are all that matters. And if they sometimes seem consumed with rage at anyone who challenges their actions, well, that’s how hacks always respond when called on their hackery.

One thing all of this makes clear is that the sickness of American politics didn’t begin with Donald Trump, any more than the sickness of the Roman Republic began with Caesar. The erosion of democratic foundations has been underway for decades, and there’s no guarantee that we will ever be able to recover.

First off, America is a Republic, not a Democracy. Mr. Krugman knows this, of course. Still bitter about the Electoral College, Democrats have embraced the idea of direct democracy. This way lies tyranny which is why guys like Krugman want it. He doesn’t see the irony of the Republic ending should his democracy dreams be fulfilled.

Second, the idea that political careerism and “plutocratic financial support” are the province of Republicans alone. It is to laugh. If those two things kill the Republic, the Democrats murdered the country decades ago. During Obama’s reign of weaponized bureaucracy, the dead Republic got beat for good measure. But even the evil that poisons every Department in the executive branch isn’t enough to kill the American Republic. The Founders built a resilient system–one that can withstand even the most determined progressive.

Finally, marinate in the idea that Paul Krugman is calling out hackery. It is clear that his cats are not enough to sooth the ravings of his tortured mind. Krugman is the hackiest of all hacks and that’s no small feat. He has competition from whole editorial departments at Slate and Salon and still manages, as a one-man troubadour to wax more loving, more poetic, more hackish than all others in service to his true love: Barack Hussein Obama. His daily editorial laments and incessant Twitter soliloquies give voice to the abandoned and bereft, so great is his sorrow.

Pray for Paul Krugman. He is tormented. His love lost. Desperate, alone, casting about in the wilderness of a Trump presidency, his very sanity is at stake. It may well be gone already.