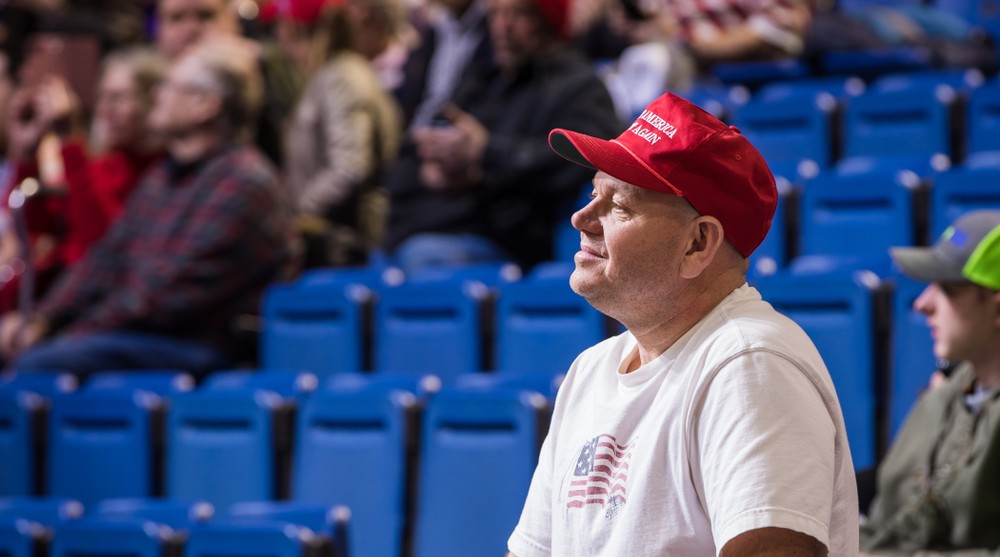 Love of America and the Constitution that has served to govern it?

Or is it, as it is often alleged, worship of the former president of this country and a movement so insidious that it threatens our democracy?

I suggest that Trumpism is no more than a people who have, in Dee Snider and Twisted Sister fashion, decided they aren’t gonna take it anymore.

Consider my father-in-law as an example of this phenomenon. A reserved man, prior to his retirement he worked an assembly line in a meat-packing plant for most of his career. He wasn’t politically active. He raised his children to be productive citizens and, like many fathers, hoped to give them better opportunities than the ones he had. He belongs to no political organizations, and he holds no memberships save that in his church.

But in recent years, he feels provoked. The country he loves and the (largely Christian) principles that have served to guide it are increasingly being mischaracterized as toxic. Like millions of others, he felt powerless against these forces, but he rebelled against them in small ways. The more the flag of the United States of America was portrayed by the Left as a symbol of oppression, the more he flew one.

Much to my surprise, in 2016 he began wearing a MAGA hat. This was a source of some family amusement simply because it seemed so out of character. But, again, it was his modest form of rebellion against what he perceived to be a creeping tyranny that let anybody into the country, sent jobs out of the country, attacked his faith and his patriotism, and criminalized the color of his skin. He doesn’t worship America, but he loves it and recognizes the bloody sacrifices of those who fought to build it, preserve it, and bequeath it generationally. A MAGA hat was, he felt, the least he could do.

This is Trumpism. Politically, it is a kind of neo-Reaganism with the brash edge of these tumultuous times. Like my father-in-law, millions of Americans who were otherwise silent have become more vocal in expressing their political convictions in the past decade. I’ve witnessed this same sociological phenomenon among fans of sports teams. You tease a guy a bit too much about his team affiliation and one day he shows up wearing a t-shirt with the team logo writ large, their hat, and one of those big foam fingers as his way of giving you the middle finger. After all, you had it coming.

But that’s not the way some see it.

Last week I sat chatting over coffee with a friend with whom I have infrequent contact. I have known him, a medical professional, to be reasonable, sensible, and serious about his Christian faith. Inevitably, the remarkable sociopolitical events of the last 18 months entered the conversation.

“I am deeply concerned about Trumpism,” he said as if this was an obvious fact to all rational people.

I was stupefied. Of the many problems facing America — a surge in political corruption and a corresponding decline in the rule of law; abortion; irrational, immeasurably destructive COVID lockdowns; the sexualization of children; open borders; soaring suicide rates; violence in our streets; victimhood and anti-Americanism in public school curricula; a church that is largely irrelevant to the cultural debate — none of these had he mentioned before offering this peculiar take on the Great American Meltdown.

As proof of this looming threat to the very fabric of our society, he cited a recent wedding he attended where the groom’s uncle arrived in a pickup truck plastered in Trump messaging. At the reception, the uncle voiced his opinions about the direction of the country. My friend thought the man uncouth. From the description, I picture this fellow spitting and scratching, drinking too much, and generally making a nuisance of himself all while wearing a wife-beater. But as the conversation continued, it seems he did no harm. He did not deny the Holocaust or call for the assassination of anyone other than the host when his stock of alcohol ran dry.

None of this is my preferred means of political expression, but, hey, it’s a (somewhat) free country, and more power to him. For decades the Left has had its equivalents. You see leftists driving, say, a Prius or a Subaru with bumper stickers like “Blue Dot in a Red State” and that nonsensical “COEXIST” bumper sticker that, adding to the irony, is somehow on the same window as the one meant as an in-your-face statement to Christians: the fish with legs reading “DARWIN.”

I don’t know. Perhaps I haven’t been paying attention as closely to what is happening in this country as I thought. Maybe I have spent too much time overseas since January 2020, and these people who frequent those interstate-side big tents selling Trump merchandise really are a menace, but they seem to be drawn from the ranks of the law-abiding backbone of this country.

To me, this conversation simply revealed the effectiveness of the steady drip of media falsification of reality. In his classic The Rise and Fall of the Third Reich, William Shirer, who served as a newspaper and radio correspondent in Germany during Hitler’s rise to power, had this to say about media’s ability to inoculate the masses against the truth:

I myself was to experience how easily one is taken in by a lying and censored press and radio…. It was surprising and sometimes consternating to find that notwithstanding the opportunities I had to learn the facts and despite one’s inherent distrust of what one learned from Nazi sources, a steady diet over the years of falsifications and distortions made a certain impression on one’s mind and often misled it. No one who has not lived for years in a totalitarian land can possibly conceive how difficult it is to escape the dread consequences of a regime’s calculated and incessant propaganda. Often in a German home or office or sometimes in a casual conversation with a stranger in a restaurant, a beer hall, a café, I would meet with the most outlandish assertions from seemingly educated and intelligent persons. It was obvious they were parroting some piece of nonsense they had heard on the radio or read in the newspapers.

Eminent Russian historian Roy Medvedev once wrote that tyrannical governments in the making need scapegoats, and Trumpism is surely that. Where Hitler had Jews and Bolsheviks and Stalin had kulaks and Trotskyists to distract from their truly criminal activities, the modern Left has Trumpism, a broad umbrella beneath which one finds white supremacy, white privilege, populism, nationalism, patriotism, capitalism, a Russian collusion narrative that was pure fantasy, and its latest iteration, the supposed January 6 “insurrection” — all things to distract from election-rigging, the weaponizing of coronavirus to transfer more power from the people to the state, and a Marxist agenda cloaked as “social justice.”

So effective has this media campaign of falsification been that virtue-signalers on the right have rushed to prove their respectability by disassociating themselves with the hairy, unwashed believers in “Trumpism.” (And make no mistake about it, the reaction against Trumpism is as much social as it is political.) Christian writer and speaker Beth Moore recently made a show of her break with the Southern Baptist Convention. This should come as a surprise to no one after this tweet last December:

I do not believe these are days for mincing words. I’m 63 1/2 years old & I have never seen anything in these United States of America I found more astonishingly seductive & dangerous to the saints of God than Trumpism. This Christian nationalism is not of God. Move back from it.

I do not doubt Mrs. Moore’s sincerity. Nor do I doubt that it is her earnest desire to be obedient to the will of her God. But I would caution her that I have never seen anything more astonishingly seductive and dangerous to the saints of God than the prevailing cultural narrative that proclaims good as evil and evil as good, and I would suggest that by jumping into that current Mrs. Moore has withdrawn from the Gentiles to break bread with the Judaizers. This was no act of courage. On the contrary, it’s the “in” thing to do. Leftist standard-bearers from the New York Times to the Washington Post rushed to praise her. That alone should give any Christian pause. Not here.

Yes, while children are taught to deny the facts of their biology, people are dragged before tribunals and convicted in show trials that serve a political end rather than justice, and millions are thrown into poverty by local, state, and federal governments that take an adversarial view of the citizens they are elected to serve, Mrs. Moore is pontificating about people like my father-in-law.

The danger is particularly seductive for those of Mrs. Moore’s class. The Christian version of Chrissy Teigen, these are people who are wealthy enough to be insulated from the real world and for whom the savage, distorted world of Twitter is their reality. (Mrs. Moore announced in April that she was taking a “time out” from Twitter because she didn’t trust herself on the platform and she wanted to “punch somebody.”  That break lasted less than a month.) They don’t punch a clock and they don’t rub elbows with those who do. I mean, do you really think these people shop at Walmart or eat at Golden Corral? Moore and those who follow her have unwittingly locked arms with elitists who hate her God and whose central message to the salt of the Earth people of this country is this: I am better than you.

My father-in-law isn’t hiding under your bed, Mrs. Moore, and Twitter isn’t the real world. Trumpism is what illusionists call misdirection and politicians call spin. Either way, it’s the shiny object, the scapegoat the would-be tyrants need to distract you from what is truly evil in our society.