You’ve probably heard that Trump left Walter Reed hospital in Bethesda, Maryland, yesterday evening. Trump voters and media people from every news outlet in creation gathered outside the entrance waiting for his entourage to take him back to the White House. He flew out on Marine One: 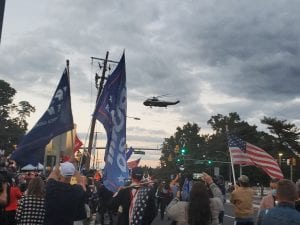 Strange and totally American things always happen at gatherings like these. On Sunday night through Monday morning, hundreds of Dominos’ pizzas started showing up outside the hospital. It’s rumored that the Trump campaign sent them. Pizza for breakfast: a patriotic act.

The media, of course, soon got in on the game, this time thanks to Bill Clinton’s favorite local burger joint. Z-Burger brought free burgers for the reporters, to fuel the antagonism, or to support the freedom of the press, depending on how you look at it. In my view, pizza beats burgers any day of the week, and that’s all I’ll say about that.

This crowd was more volatile than usual, with Trump well-wishers, counter-well-wishers, and the media all on one side of the street with nothing to do but ogle at each other as we waited for the main event. But mostly people just watched.

Sure, there was a guy dressed up as the Grim Reaper, claiming Trump took 200,000 lives through his COVID response. He got in a yelling match with a spirited Trump supporter, and the police asked him to stand back from the crowd. Great material for a messenger of death, but it was poor theater. The guy has been showing up to protests and rallies for months now, and he’s still painfully awkward around the people who ask for photos with him.

Abraham Lincoln also made an appearance, and a wild young man wrapped in a Trump flag asked for a picture with him and shouted at the top of his voice that “this man was a Republican!”

Beyond that, it was pretty chill. The helicopter flew over, people cheered and horns honked, and we walked back to our car behind a couple and their young son who had stopped to watch on their way home from the grocery store.

Despite the “basket of deplorables” stereotypes, Trump events aren’t what they seem once filtered through the media’s alarmist filter. A few oddities are always drawn to this sort of spectacle, but that doesn’t make them representative.

Mostly people want to put out more flags — Trump 2020 flags, American flags, “No More Bulls**t” flags, Gadsden flags, “Come and Take It” flags. They want to show their support for the president, and the vocal minority amid the silent majority feels the need to shout louder as they feel their political preference is downplayed or, worse, turned into something strange and dark.

Sometimes whole new waves of Trumpism are born from pure annoyance at this phenomenon. “Trumptillas,” or pro-Trump boat parades, started when a Florida man decided to rebel against his homeowners association, which didn’t allow flags, and definitely not his MAGA banner. Last Sunday, a Trumptilla on the Chesapeake Bay brought 120 boats, one earnest rendition of the National Anthem over the VHF radio, and a lot of beer. And that was about it. It wasn’t toxic, or even all that weird. It bordered on wholesome.

None of this is new. In fact, after five years of Americans repeating the same reasons for voting for Trump or against him, it’s starting to sound old. In 2020, when pretty much everything is political, this is normal. 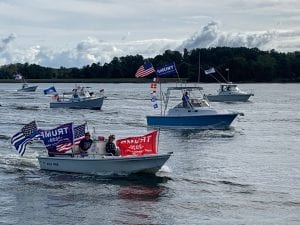 Are movie theaters dead? Is that a nostalgic question already?

Regal Cinemas announced the closure of its 536 theaters across the country Monday. This makes sense because there aren’t any new releases after Christopher Nolan’s Tenet, noteworthy solely as the only show in town. Everyone else has delayed — also on Monday, the Dune remake was punted from this December until next October — or tried to charge audiences theater prices for watching over their streaming services.

I rejected the latter gimmick and earned a spot as one of the last people to watch a movie in the wild. I attended a morning showing of Emma just before the shutdown took out non-essential businesses in northern Virginia back in March — more than half a year ago, an unimaginable span of time by 2020’s standards.

I intended to make a point by going in person, but actually few seemed interested in taking in what could have been their last film in theaters before the COVID meteor strike killed off these big, beautiful cinematic dinosaurs. It was just me and a couple women with their babies on a mom date.

Tell me if I’ve preemptively printed the obituary. To be sure, matters will improve, for the theaters that can wait that long, once people calm down enough to sit in a room with strangers — strangers who breathe and exhale droplets — for two hours. But it’s curtains for the massive, shabby halls in the outskirts of every midsize town offering nothing more than a blank wall, a cushioned seat, and very cool geometrically patterned carpet.

It’s sad, though I’m more of a Criterion Channel woman myself, and most of us were becoming streaming people even before COVID. But something is lost when we can’t stand around the water cooler or hover over our phones complaining about what a mistake it was to go watch another superhero movie last weekend — and yet how it was still sort of awesome to have our eardrums blown out by the Marvel or DC Comics world being saved all over again.

There for a while, we couldn’t resist overpaying for even the worst Hollywood had to offer us. Tenet may have been the last of that bittersweet kind of commiseration.

Is the COVID fallout forcing us to fight to regain our sanity, inch by inch?

I’ve just started reading a music critic’s book about discovering classical music late in life. It’s called A Sound Mind, which is a title worth thinking about.

My path to classical music was different than Paul Morley’s, and maybe easier. My mom found a smart way to get a breather from her pestering eldest daughter by enrolling me in piano lessons, so “the greats” never felt foreign.

But maybe I didn’t appreciate that greatness as Morley did, and that’s why I strayed, and, for example, let my college boyfriend poison my ears with acts like Father John Misty, who always sounded like a pale substitute for something anyway.

After COVID, though, I’m back, because only the strongest stuff seems to work now.

That’s true outside of music, too. A coworker told me that because of the COVID reset, she has also found herself hungering for “real — in every form.”

How much of our previous, manic lifestyles stemmed from coping with overstimulation, overscheduling, all kinds of overload? Are you returning to old habits that you had lost, things that feel more authentic and “real”? These days, I often have to talk a walk to get my face out of my computer, bake something to have a tangible creation to share with people, and listen to music to raise my spirits. These are not bad things to “have” to do.

It’s awful that the change had to come this way, and this is a brutal time even for those of us who have it the easiest. But we do change, and there’s a lot to be learned from how we adapt.

More on this after the book’s release in November — I don’t want to give away too much before it’s published. And besides, it’s long. Morley is chatty.

But I like that he’s taking me along as he attempts to master his subject. It’s a daunting goal to set: having a sound mind. You have to reckon with so much reality.