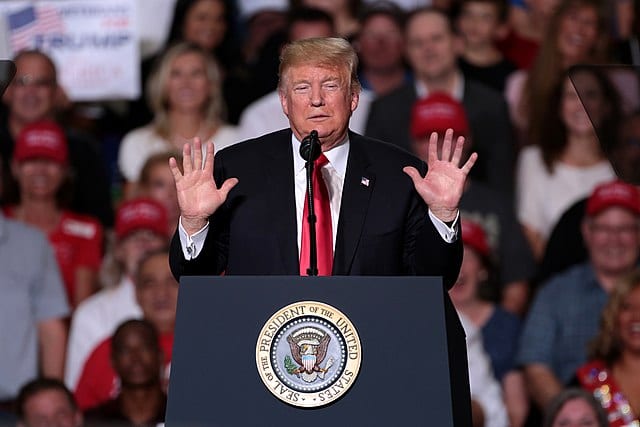 I didn’t vote for Donald Trump. I was afraid his obviously improvised campaign, imprecise explanations concerning how he planned to achieve his policy goals, and unsettling antics presaged a disastrous one-term presidency if he somehow managed to win. Unlike Bill Kristol and his ilk, however, I never considered voting for the execrable Hillary Clinton. So, knowing that Trump would win my deep red state anyway, I voted for what’s-his-name from New Mexico. Predictably, I was surprised when Trump won. But that was nothing compared to the astonishment I experienced when it dawned on me that he’s a remarkably effective President.

After only two years in office, in the face of unprecedented and relentless resistance from the Democrats, the media, and the metastasizing Mueller investigation, President Trump has accomplished more than many presidents accomplish in two terms. He has not, of course, achieved all of his goals. The most obvious disappointments involved Obamacare and the border wall. Yet, even in these areas, his administration has made measureable progress and there is good reason to believe that he will eventually overcome Democratic obstructionism and achieve his ultimate objectives. Meanwhile, Trump’s long list of unalloyed successes keeps growing.

Trump’s most conspicuous successes have involved the economy. Under his predecessor GDP growth was characterized by the kind of malaise that prevailed during the Carter era, and we were told that a growth rate of about 2% and an unemployment rate of about 4.5% was the new normal. Trump rejected that prognosis and took steps to energize the economy. Now, despite the somewhat inexplicable meddling with interest rates by the Fed, GDP growth is at 3.4% and the unemployment rate is 3.7%. As Investor’s Business Daily points out, much of this is directly attributable to the Trump tax cuts so often maligned by the Democrats and the media:

Contrary to Democrats’ claims, workers are clearly sharing in the tax-cut windfall. Not just through tax-cut bonuses and lower withholdings, but through increased opportunities and wage growth.… Average hourly wages are rising at 3.1%, the fastest rate since 1999. Unemployment rates are at lows not seen since 1969, and for minority groups, they’re lower than any time on record. Median household income is at all-time highs.

This means job opportunities for the blue collar “deplorables” who voted for Trump. Of the more than 4 million jobs created during his tenure in the White House, at least 10% have been in the manufacturing sector that the Democrats long ago left for dead.And among the most delicious ironies of the Trump economy is its positive effect on the job prospects of minority voters ostensibly represented by the Democrats. Black and Hispanic unemployment rates are at all-time lows. Female unemployment and youth unemployment are at their lowest points in half a century. Meanwhile, household incomes are rising. Yet Nancy Pelosi insists that all this is bad news:

From day one, the White House and Republicans in Congress have sold out working and middle class families to further enrich the wealthy and big corporations shipping jobs overseas.… At the same time, the President’s reckless policies are exploding gas prices, wiping out the few meager gains that some families should have received from the GOP tax scam, as wages remain stagnant.… Democrats will never stop fighting for the hard-working middle class families.

Every syllable of this is nonsense, of course. Pelosi’s claim that Americans are experiencing “exploding gas prices,” for example, is Orwellian fiction. Either the presumptive Speaker of the House doesn’t read the news or she is just another Democrat fabulist. In reality gas prices are dropping all across the country. U.S. News & World Report advised its readers last week that the average cost of gas has hit its lowest level in six years: “The national average price of gas dropped below $2 Monday morning for the first time since 2009, according to AAA. The average price at the pump was $1.998 per gallon.” If that’s hurting us, beat us harder please.

But Pelosi and the Democrats have no choice but to lie about the positive changes that have occurred on Trump’s watch. This is particularly true of the Tax Cuts and Jobs Act that he signed into law last year. They can’t admit that most of its $5.5 trillion in gross cuts eased the tax burden on families. They must mislead the voters about its dramatic increase in the standard deduction for individuals and families. They can’t admit that it doubled the child tax credit. They can’t tell the truth about the 85% of American workers who saw their paychecks increase as a result of the cuts, or the entrepreneurs who can now deduct 20% of their business income.

Likewise, the Democrats can’t tell the truth about the President’s efforts to free Americans from the Obamacare gulag by expanding short-term, limited-duration health plans and enabling more small businesses to join Association Health Plans. The Democrats can’t talk honestly about the repeal of the law’s “death panel,” the Independent Payment Advisory Board (IPAB), whose sole purpose was the rationing of essential health care to the elderly. They must lie about the effective repeal of Obamacare’s individual insurance mandate when the President and Congress eliminated the law’s “tax-penalty” for failing to purchase exorbitantly priced health plans.

Nor can the Democrats tell the truth about Trump’s progress in reforming the federal judiciary by appointing judges willing to follow the Constitution. They can’t talk about his nomination and the Senate’s confirmation of two Supreme Court Justices — Neil Gorsuch and Brett Kavanaugh. Nor can they discuss the President’s nomination and the Senate’s confirmation of 83 additional federal judges who will sit on United States Courts of Appeals and United States District Courts. And they certainly can’t breathe a word about the very real possibility that he may well have to appoint a third justice to the Supreme Court during the next two years.

And then there’s foreign policy and defense. The President moved the U.S. Embassy in Israel to Jerusalem. He withdrew from the outrageous Obama Iran deal and re-imposed nuclear-related sanctions. He initiated an historic summit with North Korean President Kim Jong-Un in an effort to denuclearize the Korean Peninsula. Trump changed the rules of engagement with regard to the fight against ISIS resulting in the liberation of virtually all Iraqi territory from the tender mercies of that terrorist group, and announced the withdrawal of U.S. forces from Syria. Finally, Trump dramatically increased military funding to more than $700 billion for FY 2018.

The list of Trump’s accomplishments is far longer than the above, but the point should be obvious. So let’s wrap it up with Criminal Justice Reform, something to which several administrations have devoted earnest lip service. As Wayne Allyn Root put it a few days ago, “If Obama passed criminal justice reform, he’d be hailed as a hero by the media, black leaders, the black community and the ACLU.… Trump did. I hear crickets.” Instead, the Democrats, the media, and Robert Mueller want to take him down. Why? Precisely because he has been so successful. I think he’ll beat them in the end, and I know he’ll get my vote in 2020.