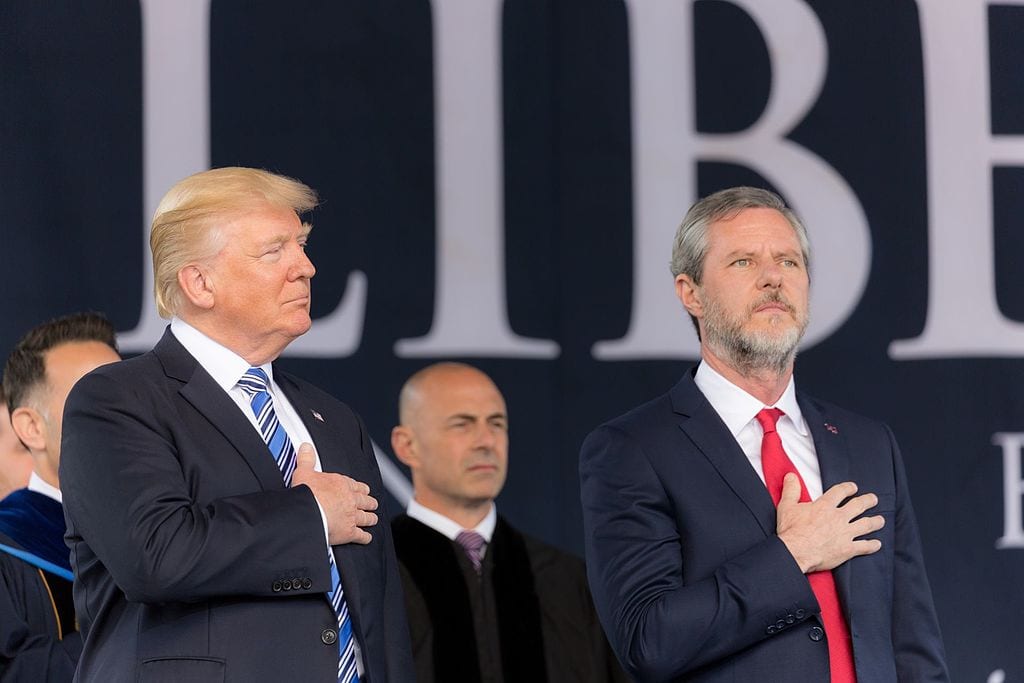 The media are taking aim at Jerry Falwell Jr., the president of Christian education powerhouse Liberty University. This ardent Donald Trump supporter and influential evangelical leader is the target of what appears to be a coordinated, media-driven campaign of personal destruction. Falwell, who successfully led the evangelical Christian charge for Trump’s victory in 2016, is on the kill list of our mainstream elites in an effort to minimize the impact of his ardent backing of the reelection of the president they love to hate.

The education, political, and media establishments are working overtime on what Falwell told the Associated Press is a “ ‘criminal’ smear campaign” against him. Paranoia? Nope. In truth, Falwell has a target on his back. And front. And sides, too. The media establishment, especially, seeks to destroy this successful higher education executive who built conservative Liberty University into a financial and academic “behemoth” with more than 100,000 students, as even the New York Times has grudgingly admitted. Bottom line: The 2020 election is right around the corner, and Falwell, who wields too much influence on behalf of the president, must be stopped.

Falwell has dared to challenge the established order both with his support for Trump and embrace of a higher education approach that puts students and results first. Politico took a journalistic AR-15 to Falwell with an aggressively fake news article labeling the university he leads as “a totally dysfunctional organization” “(t)hat is very similar to Trump’s White House.” The Washington Post compared the world’s largest evangelical university to Trump’s White House, which has a “Culture of Fear.” Other publications piled on, with Mediaite decrying his “alleged abuse of school finances,” “shady investments,” and “abuse” of employees.

According to the media, Falwell’s corruption extends to his faith. As a NeverTrump columnist opined, Falwell is not really a Christian because, well, all of the media mud combined with his support for Trump proves that he lacks the “faith and courage” of Jesus Christ who, by the way, wouldn’t be caught dead — or, more appropriately, resurrected — at Mar-a-Lago. Even theology is weaponized in service of the narrative of a corrupt president backed by equally corrupt allies.

Almost all of the attacks rely upon anonymous sources: a few former students — often journalism graduates — enjoying their 15 minutes of anti-Trump fame, angry former employees and associates, and disgruntled academics. Ignored by the media have been the very specific replies of Falwell to the recent attacks, which have been published by the university here. Fake news.

But fake news is supported by fake education, and Jerry Falwell has rejected the increasingly irrelevant product of the higher education establishment, ignoring the advice of traditional academics in building Liberty. Instead, Falwell links education to the need for financial and spiritual student success in life outside the university. This has angered some residential Liberty professors and administrators, who wish to join their colleagues at other universities on the social justice barricades. Falwell’s answer to the small and largely anonymous dissonant faculty and administrators could be summarized in words that any successful executive would recognize: Do your job!

And at Liberty, unlike much of higher education, your job is not promoting socialism, social justice, or intersectionality — or, for that matter, becoming anonymous sources for weaponized anti-Trump media. As Falwell has pointed out many times, that’s not why parents pay for college, nor is it why hard-working adults sacrifice to enhance their résumés with online degrees. The job of a professor or academic administrator begins and ends with student success in the real world.

My experience with many of these faculty, administrators, and students participating in the anti-Falwell media campaign is instructive. I have recently left my academic dean’s position at Liberty University after a career that included a stint with a major state university (where I achieved tenure) and more than a quarter century as an executive with media and consumer merchandising companies. Leaving was precipitated by my battle with cancer. Difficult times, what with fighting for my life and all. But the side effects of chemotherapy are similar to dealing with a few vocal faculty and department administrators determined to remake the world in their activist image through students. Same nausea, different source.

In our program, the difference between faculty and administrators following Falwell’s lead and those turning their backs on student-centered, career-focused education was stark. We achieved extraordinary enrollment growth and student success in our online programs by focusing on quality of instruction and course content. But our residential journalism program, a major source for a number of these articles, was demonstrative of the ills of similar university programs. The journalism major led our school in student dissatisfaction and enrollment decline. Faculty and administrators in this area took their cue from the larger — and failing — worlds of journalism and trendy social justice studies at other institutions.

The result: A small but vocal group of faculty and administrators — more activists than educators — encouraged an equally small group of students to identify with causes and organizations that were the antithesis of the mission and focus of an evangelical Christian university. They have been welcomed with open arms by leftist media. Their litany of complaints about the university and Judeo-Christian culture echo those of the higher education establishment: Orange Man bad, Jerry Falwell bad, evangelicals bad, Liberty University bad, and the police and military and Israel and the United States even worse.

Stuart Schwartz, a former media and consumer merchandising executive, retired as associate dean of academics in the School of Communication & Digital Content at Liberty University.