At Large,Top Story Donald Trump,Emmanuel Macron,France,Trump Haters Trump and Macron: An Unlikely Parallel - The American Spectator | USA News and Politics
Menu
At Large
Trump and Macron: An Unlikely Parallel
Two very different presidents of two very different nations, it turns out, now have much in common, starting with the enemies who obsess over each.
by Michel Gurfinkiel
Donald Trump and Emmanuel Macron at the Élysée Palace, Nov. 10, 2018 (Wikimedia Commons) 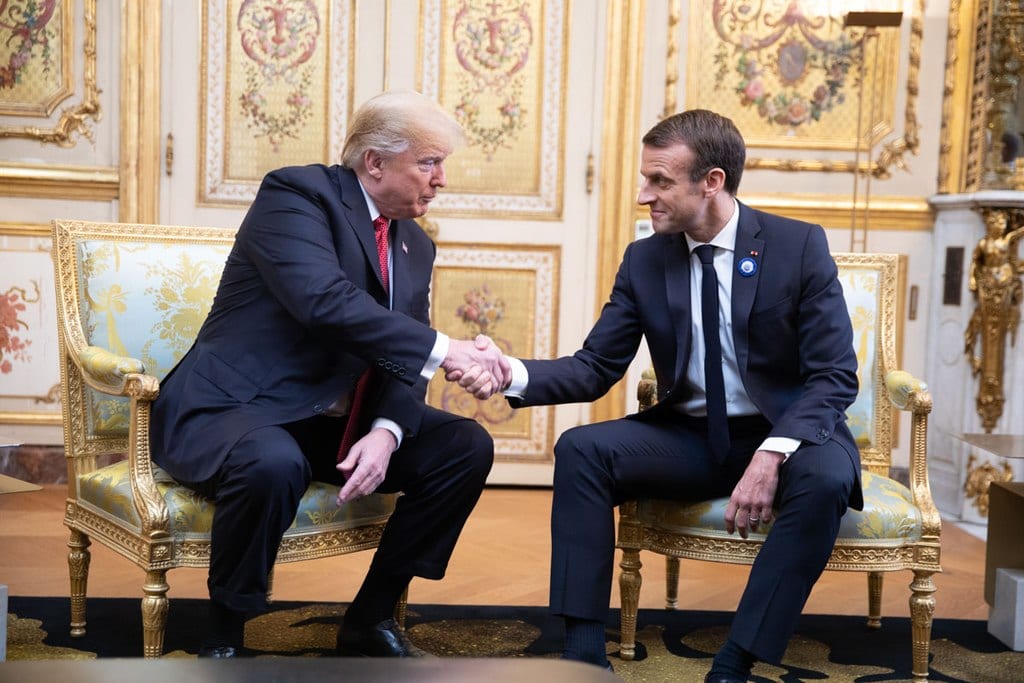 Michel Gurfinkiel was the foreign editor of Valeurs Actuelles, a Paris-based newsweekly, for many years. He is the author of a number of books on Israel, Jewish history (including a remarkable study of Odessa), and international affairs. Fluent in several languages, he submitted this paradoxical article to us without the assistance of a translator.

Why paradoxical? Because as he points out, Donald Trump and Emmanuel Macron are mirror opposites: the one a classically educated technocrat in what Gurfinkiel not inaptly calls the most statist country in what we used to call the Free World, and the other a hardball original from the greatest city on Earth; and yet they find themselves assailed and disparaged by enemies who bear striking similarities — “elite” (viz, high-paid) media persons with no discernible interest in the traditional aims of fair-and-accurate reporting, limousine liberals (what the French call the gauche caviar) who are united in hating themselves and their own countries, pols of left and right who resent the way these two have challenged the status quo, aka the trough. What nerves have they struck to attract such irrational, puerile venom? Could it be that their unforgivable sin is their intuitive national sense? Their reflexive recoil against efforts to balkanize their countries on racial bases, with the police the soft targets (ironically enough) of every anti-French and anti-American self-hater? Perhaps we overstate, or simplify, the characteristics of the Trump-hating, Macron-hating type; Michel Gurfinkiel, whom we know to be above all else a man of reason and evidence-based reflection, mild and formal in manner, would likely ask for caution and more study. But he would surely insist that the only argument to have is another argument, and not arson-punctuated riots and hysterical, Taliban, or Salem witch trial inquisitions.
— Roger Kaplan

Paris
Throughout the coronavirus crisis, I listened patiently — as a citizen of France — to those of my American friends who cultivate an intense dislike of President Donald J. Trump. What puzzled me was the extent to which their criticism of the president himself and of his administration paralleled what I was hearing at the same time in my home country about the French president, Emmanuel Macron, and his own administration. Both the anti-Trumpians in America and the anti-Macronians in France saw the crisis as the ultimate acid test showing how unfit the current head of the Executive was for his job, derided his policies as amateurish, inconsistent, or downright criminal, and determined that he should and would soon be wiped off the political map. American and French pronouncements or tropes or metaphors could easily be traded verbatim one for the other.

It puzzled me for two reasons at least. First, there are vast differences between America, a federal republic based on free enterprise, and France, arguably the most centralized and Statist democratic nation in the world: how, then, could their governments be criticized in almost identical terms?

Second, Trump and Macron are supposed to stand, as leaders, at opposite ends. Trump ran in 2016 as a nationalist and an America-Firster, Macron in 2017 as a globalist and a Europeanist. Trump led the charge against the Ivy League–educated elite that dominates D.C., whereas Macron, a graduate of the exclusive French National School for Public Administration (ENA), seems to epitomize an analogous elite that literally owns France and largely controls the European Union bureaucracy. Trump is outspoken, harsh, bad-mannered; Macron soft-spoken, mellifluous, and over-courteous. Trump ripped the media, while Macron was largely made by them. Trump is a baby-boomer, and Macron a millennial (younger than Justin Trudeau of Canada by five years, no less). Last but not least, while Trump praised hydroxychloroquine as one helpful medication against the coronavirus, Macron’s government came close to banning it. How come, then, they’ve elicited the same furor — and quite often from the same kind of people ?

One explanation is that a map does not reveal everything about a territory: there are also, beyond the blatant dissimilarities between the two presidents, striking similarities. Both of them, Anti-Elite Trump as well as Elitist Macron, were elected as outsiders, against their respective political establishments. While the former in effect hijacked a reluctant Republican Party, the latter dismembered both the Socialist Left and the Conservative Right in order to found his own coalition. Both faced, once elected, hectic quasi-rebellions — unprecedented by Western democratic standards: the so-called Resistance against Trump, complete with special investigations and an impeachment attempt; the Yellow Vests riots against Macron. Moreover, Trump and Macron do seem to get along quite well as persons. “I like this guy,” Trump famously said about Macron in a press conference when they first met in 2017.

There is even more to it, considering how Trumpian Macron sounded in his last nationally broadcast speech on June 14. In previous speeches, the French president insisted that “the day after” the sanitary crisis would not be like “the day before.” He now clarifies that France and Europe, under the new dispensation, must disentangle from full-bore globalization and restore their industrial sovereignty. Quite an about-turn indeed, and incidentally a vindication of everything Trump has stood for for years.

It is on the highly inflammable issue of national identity, however, that Macron’s alignment with Trump is truly amazing. The American president is taking an uncompromising line against the attempt, initiated by Black Lives Matter and the Far Left, to dissolve the police forces, turn the Republic into a chaotic “people’s commune” run along racial lines, and delete from American history and culture everything hitherto celebrated as American, from Christopher Columbus to Gone With the Wind. As a similar outbreak is taking place in France (around the figure of Adama Traoré, a delinquent who died in 2016), Macron, just like Trump, if in his own Gallic terms, made clear on June 14 that he would not allow French history to be rewritten nor the police to be defamed. Moreover, he characterized the new racially or religiously groups that challenge France as a nation as “separatists,” a very hard term akin to “traitors” or “enemies of the people.”

Anti-Trumpian Americans should take a deep breath and consider whether their detestation of the man blinds them to what the president is doing. Like the French president, Trump has sought to reverse policies that were not working. Should their personalities obscure these efforts? Trump oversaw a historic low in unemployment, notably among minorities, reversing half a century of Democratic social policy failure. How can Trump be held responsible for failures in police management, when nearly all the cases of police overreaction have occurred in cities — and police departments — controlled by Democrats for decades? Macron, too, has sought to reform policies that have mired France in urban blight and economic lethargy. Is it possible the sophisticated French president sees something in Trump that most sophisticated Americans miss? Maybe it has struck him that the two of them share some essential perceptions about the real world.