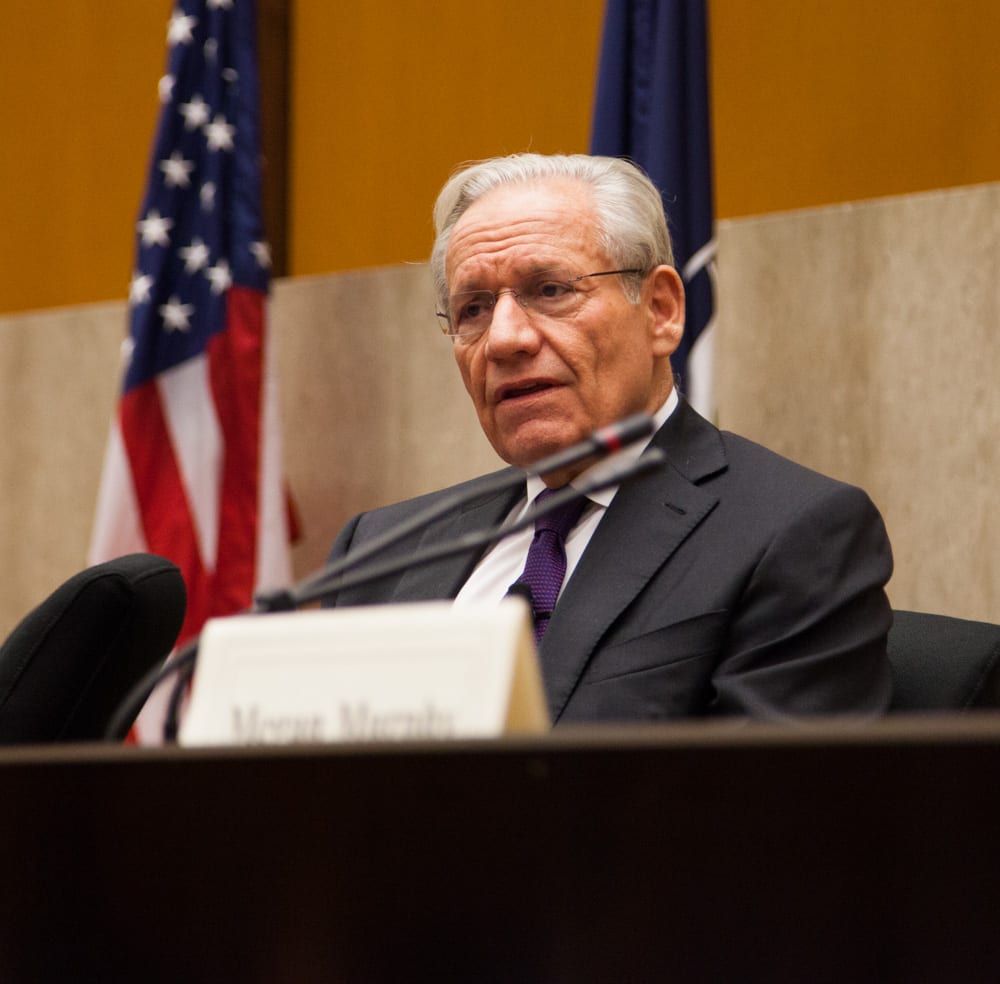 Bob Woodward’s new book, Fear: Trump in the White House is meant to cast a negative light on Donald Trump’s presidency. Yet from the bits of information that have been released in the press thus far, there is much that shows Trump less as an über-villain, and more as a responsible steward of the national interest. You see, whether intended or not, Trump’s entire political career (much like his previous business career) has been about slaughtering sacred cows. In this case, Trump’s presidency has attempted to challenge the status quo that dominates Washington, D.C. and prevents reasonable policy from being made.

Think about it: in two major instances in Fear, President Trump expresses skepticism about the American military engagement in Afghanistan as well as our military presence on the Korean peninsula. In both instances, Trump insists that hardly anyone in Washington knows “anything about business” and, due to this fact, the world is taking advantage of the United States.

During last year’s strategy review for the failing war in Afghanistan, for instance, Trump grew incensed at the advice his generals were giving him about the strategy. Trump is reported to have argued that their advice was akin to the bad advice a highly paid consultant gave to the owners of the elite 21 Club in Manhattan during their disastrous remodel in 1987.

According to Trump, the overpriced consultant’s “lousy advice cost the owner a year of lost business and that talking to the restaurant’s waiters instead might have yielded a better result.” To add insult-to-injury, Trump is reported to have argued that “the tendency is to assume if someone isn’t a three-star general he doesn’t know what he’s talking about, and that… talking to lower-ranking workers has gotten him better outcomes in business.”

The brilliant Nassim Nicholas Taleb made a similar case in his wonderful book, Skin in the Game: Hidden Asymmetries in Daily Life. The so-called “experts” are often people who have nothing on the line when they proffer advice. Therefore, they lack the experience necessary for implementing the kind of winning change that is needed to solve a problem. For Trump, who fancies himself as a bit of a turnaround man, the advice of the military leadership in Washington is useless. After all, these leaders have had 20 years to fix the mistakes — and they haven’t.

My friend David Danford recently argued that the military’s optimism about any mission is often why the country finds itself in quagmires, such as Afghanistan. Danford, who teaches at West Point, is correct. His solution is to inspire greater cynicism in American military leaders.

Earlier this month, the outgoing American military commander in Afghanistan, U.S. Army General John Nicholson Jr., advocated for the United States to end its engagement there. After all, General Nicholson (rightly) argues that things will never change in Afghanistan until Afghans stop killing Afghans — which will likely neverhappen.

To maintain America’s presence in Afghanistan beyond a limited, counterterrorism mission would be a supreme waste of lives and national treasure. It would also continue compelling greater challenge to the United States globally. America’s military is perceived as the strongest in the world, yet it cannot defeat cave-dwelling insurgents after 20 years of trying. Given this perception, if you were a strategist in Beijing, Moscow, or Tehran, wouldn’t you be willing to challenge the Americans more openly?

Sojourn Out of South Korea

Similarly, Bob Woodward reports that President Trump had a contretemps last year with Secretary of Defense James Mattis over the United States’ longstanding presence in South Korea. At present, the United States maintains 28,000 U.S. troops (and many of their families) in South Korea. American troops are expected to lead a defense of South Korean against what would be a bloody North Korean invasion (which may involve nuclear weapons).

Trump correctly demanded to know why the United States would be willing to risk its vital young men and women in uniform to fight for a country like South Korea, which has a GDP of $1.5 trillion (making it the eleventh-largest economy in the world). It is also home to one of the most advanced militaries in all of Asia. Compared to its rivals in North Korea, the South Korean military could likely repel an invasion from North (though at great cost).

According to Woodward, Trump asked to see plans for removing U.S. troops from the peninsula entirely. To which, Secretary of Defense Mattis said that the American presence in South Korea was designed to “prevent World War III.” Such apocalyptic talk is absurd. Although, in Mattis’s defense, the previous North Korean invasion of its southern neighbor almost precipitated a third world war (only because Washington policymakers failed to heed George Kennan’s caution about getting involved in the Korean dispute).

But, today, unlike the situation in the 1950s, the South Korean state is more than capable of not only surviving an attack by North Korea — but it would also likely defeat North Korea in a war. The costs on South Korea would be great (which is why Seoul wants American forces in harm’s way). Nonetheless, in the words of retired U.S. Army General James Marks, “after a surprise attack, the North Korean advantage would last about four days” with or without American forces present. And just because American forces might pull out of South Korea today does not mean that the U.S. military would abandon South Korea should the North ever launch a gruesome invasion.

Plus, the fact that North Korea is intent on acquiring nuclear weapons means Washington must change its posture. If Kim Jong Un really is crazy, and does eventually acquire a robust nuclear weapons capability, why assume that he’d be disinclined from nuking the bulk of the American forces on the peninsula in an opening attack? Wouldn’t it be better to keep those forces back? What’s more, most analysts believe Kim is not crazy. Keeping large U.S. forces on the peninsula, then, merely stymies any hope of a peace deal.

Fact is, just because the United States hasn’t officially lost in Afghanistan or that Washington has managed to prevent South Korea from being invaded by the North does not mean that America is winning. In 2005, the geopolitical analyst George Friedman wrote that the United States was so powerful that it didn’t need to win wars; it merely needed to ensure that it did not lose them. Such a paradigm is insane — especially for those footing the bill, both in terms of blood and treasure.

For a country with the world’s largest defense budget, having “strategists” say that the best thing the United States can do in war is to neither lose nor win them is exactly why a political outsider with extensive business — but little political — experience won in 2016. Trump’s election was the apotheosis of the decades-long failure of America’s bipartisan fusion party (the so-called “Deep State”).

Of course, in the face of such failure, the bipartisan consensus among America’s political elite is immune to change. When challenged about the efficacy of the Afghan War strategy, Trump is belittled and called “insane” by anonymous government officials. After questioning the desirability of keeping American forces hostage to a nuclear-armed Pyongyang on the Korean peninsula, Trump is derided by shadowy “experts” and accused of coddling dictators. Rather than reassess their strategies, and make hard choices, America’s professional “strategists” are merely doubling-down on a losing hand (clearly, their lack of business acumen means they’re unfamiliar with the “sunk cost fallacy”).

What Trump is doing is slaughtering many sacred cows in Washington, D.C. For this reason alone, the “Deep State” has decided Trump’s presidency must be ended.