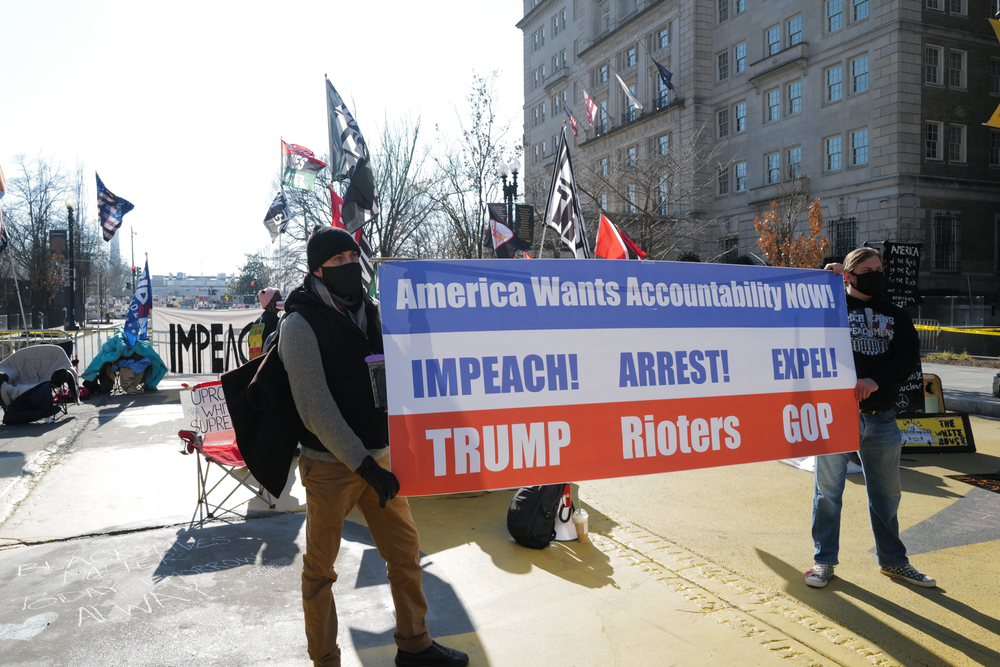 Whatever leftists hope to accomplish with Trump’s impeachment, it is not the unity Biden espouses. By ignoring Biden’s call, leftists are throwing down a gauntlet and demanding he choose between them and unity. Whether they admit it or not, the presidency they are threatening is not Trump’s but Biden’s.

Following the horrific Capitol riots of two weeks earlier, Biden repeatedly called for “unity” in his inaugural address: “Together we will write an American story of hope, not fear. Of unity, not division.” Despite Biden’s call for unity, the Left’s calls for impeachment predated it … by over four years.

House Members from the left repeatedly challenged the certification of Trump’s election in 2016. Failing there, the Left then clamored for his impeachment ahead of his inauguration. When Democrats won the House in 2018’s midterms, the Left demanded impeachment be the new majority’s first priority. Despite the Senate‘s acquittal, the Left continued their impeachment chorus. In the waning days of Trump’s presidency and their fourth general attempt, the Left achieved the unprecedented second impeachment of a president.

The latest impeachment article for “incitement of insurrection” concludes:

Wherefore, Donald John Trump, by such conduct, has demonstrated that he will remain a threat to national security, democracy, and the Constitution if allowed to remain in office, and has acted in a manner grossly incompatible with self-governance and the rule of law. Donald John Trump thus warrants impeachment and trial, removal from office, and disqualification to hold and enjoy any office of honor, trust, or profit under the United States.

There are numerous problems with the Left’s second impeachment of former President Trump.

The most important problem with the Left’s latest impeachment is its irrelevance to most Americans.

The first is the constitutional question because Trump is now “former president.” The Constitution states: “When the President of the United States is tried, the Chief Justice shall preside.” That Supreme Court Chief Justice John Roberts will not preside over Trump’s second impeachment trial underscores the constitutional conundrum of impeaching a former president. The Constitution concerned itself with the workings of the government, but Trump’s departure from the government when his term ended took him outside the government.

The second problem with the Left’s latest impeachment is that convicting President Trump is impossible. This is due not to a constitutional matter but a mathematical one: On January 26, 45 senators voted that they believe this impeachment effort is unconstitutional. Because in an impeachment trial, the Constitution requires two-thirds of the senators to vote in order to convict, this leaves Trump’s House prosecutors at least 12 votes short —possibly more if any of the 55 who believe this trial is constitutional should find that the charge against Trump is unproven.

The third and most important problem with the Left’s latest impeachment is its irrelevance to most Americans. To a nation over a year into a global pandemic and a depression-worthy economy, this trial will not be high drama but sideshow. To them, Washington will not be focusing on their life-and-death struggle, but on a moot exercise that cannot succeed, and if it did would remove a president from office who is no longer in office.

Of course the Left’s latest impeachment trial is not unifying either, but the definition of disunity, because that is all it can really accomplish. For leftists, though, this is not a problem. Disunity is precisely what they hope to accomplish.

The second impeachment trial is also intended to bend Biden to the left and eliminate his other political options. Like Cortez burning his ships, the Left wants to force Biden’s allegiance.

The Left has never been sold on Biden. Biden’s history was that of an establishment moderate; he went just far enough left to take advantage of the opportunity presented by the Left’s fracturing over a multiplicity of alternative candidates in the Democrat primaries. Theirs was a marriage of convenience, each using the other to get Trump. Having gotten Trump, Biden would like to get away from the Left, while the Left is bent on getting control of Biden. Impeachment does this for the Left.

Impeachment cuts Biden off from conservatives and moderates seeking to move past Trump. Unity offers this possibility to Biden and so works for him. Unity does not work for the Left. They are America’s smallest ideological group. In a unity sing-a-long of “Kumbaya,” theirs would be the quietest voice. To succeed, the Left must have division, the more fractured the better, so as to split conservatives and moderates amongst themselves too. Instead of bipartisanship, the Left need hyper-partisanship.

The Left’s drive for impeachment now is not about Trump’s presidency but Biden’s. The Left’s impeachment is also not a threat to Trump but to Biden. Biden’s call for unity is a call for moderates and Independents, and abandoning unity’s call means driving them away.

Biden has limited support. He won the presidency due to opposition to Trump, not personal support. With Trump gone, the glue of Biden’s support goes too.

Biden also has limited congressional support and limited time. Democrats hold a combined House and Senate majority of just 11 seats — and one of whom is Vice President Kamala Harris. There are just 21 months until 2022’s midterm elections. Obama and Clinton lost their first midterms badly; anything approaching those defeats would cost Biden both houses.

For Biden, impeachment risks all three: popular support, congressional support, and time. Each passing week over which impeachment hovers is a week lost for Biden’s agenda, of moderates’ goodwill in America, and of conservatives’ cooperation in Congress.

Impeachment is at best a risk for Biden and at worst a loss. Only for the Left is it a win.