Another Perspective,Top Story Democrats,Economics,Lincoln,Trump America Desperately Needs to Embrace Trumponomics - The American Spectator | USA News and Politics
Menu
Another Perspective
America Desperately Needs to Embrace Trumponomics
Neoliberals have sold out our country. Trump knows how we can take it back.
by Adam Korzeniewski
Donald Trump speaks to the Economic Club of New York at the Waldorf Astoria, New York City, September 15, 2016 (Evan El-Amin/Shutterstock.com) 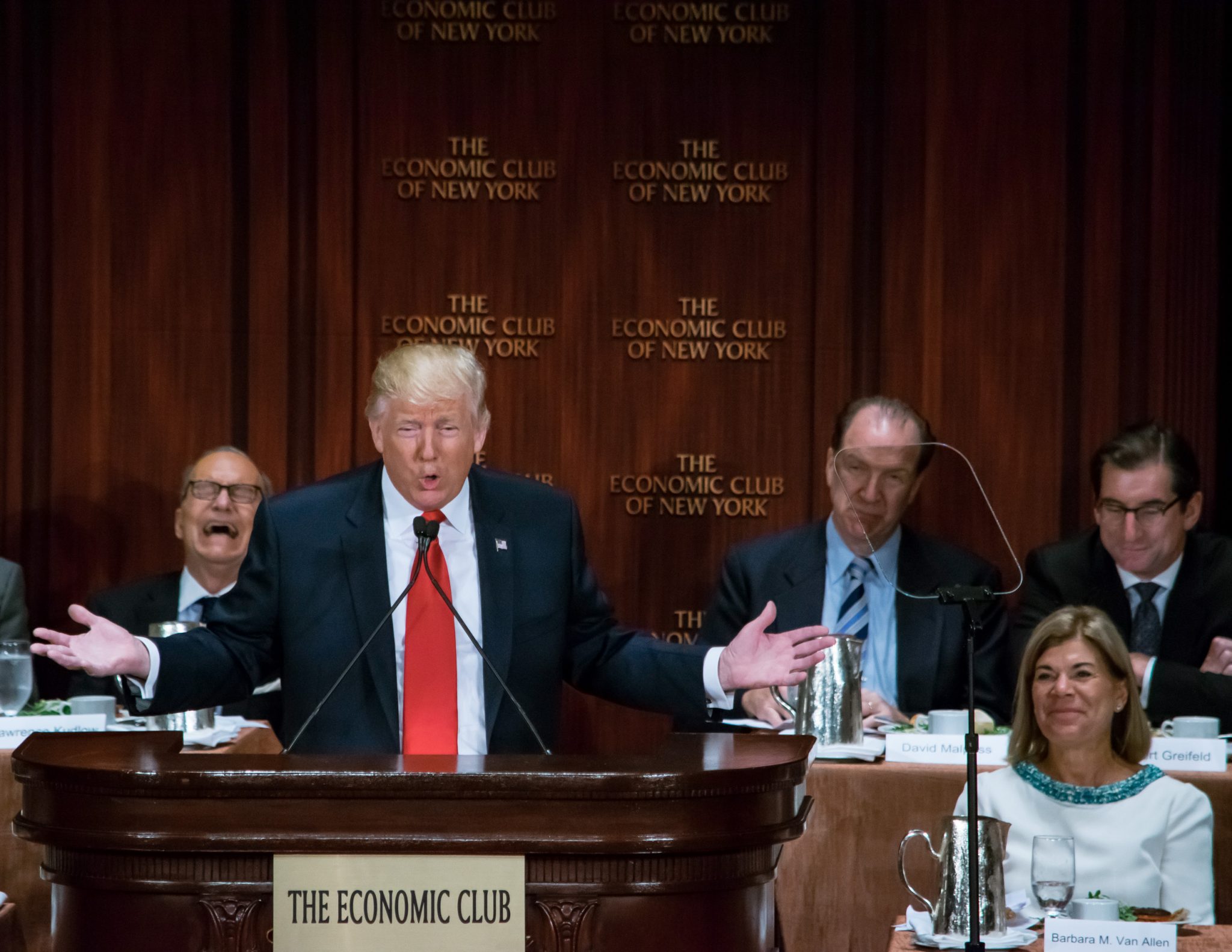 President Trump sent the D.C. establishment into hysterics by running on industrial policy, national economics, immigration restriction, and skepticism of globalism. But Trump’s economic worldview is not new; its core tenets were put forth by the Republican Party at its founding. Ideas that seem radical to today’s Beltway Republican elite were once mainstream GOP economic philosophy. But now the conservative elite suppresses these views and shuts them out of the policy discussion.

The main reason for this is the modern Republican Party’s embrace of neoliberal economics. It finds common ground here with the contemporary political Left. Neoliberalism, broadly defined, constitutes a wide range of policies, including the deregulation of markets, elimination of trade barriers, increases in immigration, and the globalization of capital flow. These policies lead to the liberal calcification of corporations and government bureaucracy. They also treat people as interchangeable components in the economy, in which individual value and cultural norms are meaningless.

The neoliberal worldview is hyper-utilitarian and anti-American. People are not interchangeable economic cogs, and individual Americans’ cultural values and norms matter in determining national outcomes. But while the dignity and livelihoods of Americans were once held as an important policy consideration, now they’re willingly traded away for corporate profit.

Neoliberalism and utilitarianism are antithetical to the founding of the Republican Party as well. Lincoln’s Republican Party was premised on Henry Clay’s American System of Political Economy, which focused on internal improvements (infrastructure), tariffs to protect industry, and subsidies when necessary. Clay’s system improved on Alexander Hamilton’s many writings, most notably his 1791 Report on Manufactures. Clay’s notions of national economics served as a mechanism to make a prosperous American nation in the face of foreign hostility and general poverty. Under this system, the United States became an economic juggernaut.

In contrast to Clay’s system, the history of free-trade activism in the United States is closely tied to the slave labor lobby and the commodification of human life. Henry Carey, Lincoln’s economic adviser, described the period under the Democratic President James Buchanan as the “great free-trade crisis,” during which the slave labor lobby increased its strength in the United States and guaranteed civil war. Powerful foreign financial and business institutions in London and Paris backed the slave establishment. Both England and France invested in short-term lending in the Antebellum South and traded securities backed by the value of slaves as if they were mortgages today.

At this point, America’s economic future looked bleak. The commodification of labor, opening of borders, and expansion of the plantation system were interlinked. The westward expansion of slavery and lack of tariffs meant that slavery would continue and that the United States would become an economic satrap of the European colonial powers Americans had fought off time and time again. In response to critics of this approach, the slavery lobby argued about the importance of efficiency of markets and why the United States couldn’t make its own finished goods. This again is utilitarian. Efficiency for efficiency’s sake means that the human condition is secondary to the material, and lives are universally interchangeable — a view that can and does lead to evils like slavery. But Lincoln, a student of Clay, knew that Clay’s American System could make America great and could do away with slavery once and for all.

Fast forward to today, when we are once again faced with serious national crises. Donald Trump woke a long-slumbering spirit of American self-confidence in the face of national peril. Pundits were lauding a waning America and elites were excitedly looking to the rise of China while the American people were suffering. Undaunted, Trump took up Lincoln’s mantle by reintroducing policies that had huge success in post-slavery America. It’s ironic that a man many conservative intellectuals consider a buffoon has a better sense of the wisdom of Republican economic historical norms than the professional apparatchiks.

On the other side of the aisle, the Democrat Party seeks to crush the middle-class yeomen of the United States precisely because of their willingness to vote for Trump. Not coincidentally, this, too, has parallels to Lincoln’s time, when Democrats were similarly hostile to yeoman farms owned by citizens, not serviced by slaves. The average American is not useful for their ends.

Like modern D.C. Republicans, congressional Democrats are also neoliberals. It’s just a matter of degree; Democrats are willing to go further to crush middle-class Americans. Using many of the same cheap-labor, outsourcing, and regulatory policies, neoliberals put American workers in a vise. President Biden’s neoliberal economic model leeches off the entropy of American economic power to accelerate the end of domestic industries and American jobs in favor of international corporate profits.

Sadly, this mistreatment of American workers is not new. The post–World War II era, the Cold War, and after were all periods of mass liberalization of the United States economy. Granted, the U.S. did grow massively when it opened borders and became the dominant exporter of goods to aligned and non-aligned nations. But these policies were not without pernicious consequences. The borderless American economic policy created worldwide corporations led by people who saw themselves less as Americans and more as a global elite. They brought with them a stateless, unpatriotic social and political liberalism that eroded our economy and institutions back home.

These neoliberal policies contributed to the destruction of the family unit (fueled by fewer well-paying jobs for working-class men) with the resulting collapse of birth rates (because many Americans lacked money to raise a family) and a decline in a meaningful spiritual life (replaced with a kind of secular utopianism). American workers were replaced with foreign labor. The goal was, and remains, cheap material goods at the expense of all else.

All of this proves that neoliberalism is an economic system with often harmful social and political consequences. Neoliberals want to forget that politics and economics are inextricably linked; both are predicated upon social cooperation. While American political and business leaders were developing domestic industries in allied states, they were selling off the livelihoods of America’s children. And there are no guarantees that new industries will rise to replace the departing industries. Post-war conservatism had no coherent answer to the social and cultural problems brought on by exporting American jobs and innovation. And conservatives are still struggling to respond to the problem.

The United States must embark upon a journey back to Lincoln’s economics. Lincoln understood that a country must have businesses that own the nation’s production. Trading soybeans for computer parts is what a colony, not a nation, would do. That’s why the British Empire wanted the American colonies to trade commodities for finished goods, to never industrialize: productive power is equivalent to national power. The Founding Fathers rebelled against Britain in part to own their means of production.

A nation is not free when it cannot provide the materials needed for productive independence. Today’s American policymakers instead place the United States in treaties with imperial empires that will use their trade and economic gain to impose their social and cultural (and maybe even military) dogma on their foes. See how Hollywood and the NBA have utterly capitulated socially and politically to the communist Chinese for access to their economic markets.

Our economic vulnerability expands as we fail to address our debt and now inflation problems. In addition to regulatory costs, Biden and the rest of the neoliberals have added an inadvertent regressive “tax” on the economy with inflation. This “tax” drives up the price of goods ahead of the purchasing power of the regular American. The wealthiest can hedge against this with their investment portfolios. But again, the poor and middle class are harmed the most, especially if they inadvertently pay more in taxes as a consequence of inflation pushing them into a higher bracket.

And America continues to trade the future for the present by inflating its currency to monetize the trade deficit. The typical Beltway solution to this problem would be economic austerity or transformative, budget-busting spending measures, but these do not bring back the productive capabilities that have been sent overseas or build new industries at home. The priority in a New American System should be to stop the metaphorical bleeding by focusing on America’s ability to manufacture the products we need.

President Trump sought to address the excesses and abuses of neoliberalism in a time when many were discounting America’s future. It is time for us to think about tomorrow by learning the lessons of the past and borrowing from America’s own intellectual heritage. It’s time to examine Abraham Lincoln’s legacy and understand what he understood: that humans are not commodities and should not be treated as such. American citizens have intrinsic value, and they deserve meaningful work. Work leads to marriage, to children, to homes, and, yes, even to consumer goods. It all depends on businesses and jobs being in our country. Enough with exporting innovation. It is time to rebuild America.

Adam Korzeniewski is a Marine Corps combat veteran and a former Trump administration official in the Treasury and Commerce departments. He specializes in fiscal and economic policy and national security topics.

I read in the progressive press that the Republicans are...Read More