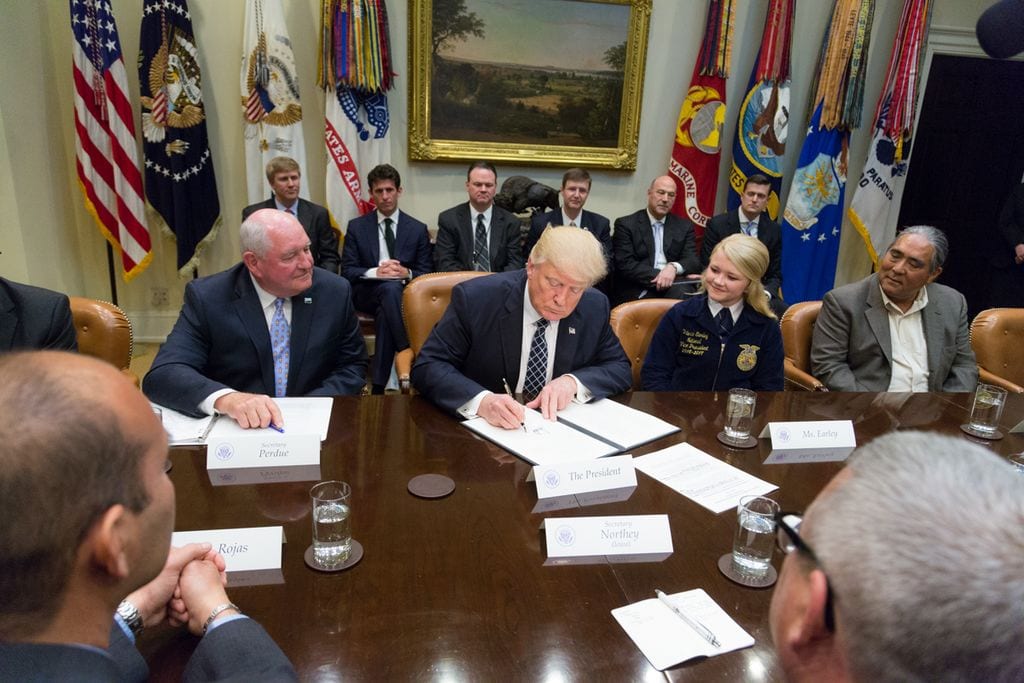 During the 2016 primary season, Donald Trump pledged to facilitate lower health insurance premiums by permitting coverage to be sold across state lines. Oddly, considering that conservatives have long advocated this as a way of augmenting market competition among insurers, the proposal was ridiculed by his opponents for the Republican presidential nomination. During one debate Marco Rubio actually mimicked Trump’s physical gestures, mocked his references to “lines around the states,” and snidely added, “whatever that means.” Friday, the Trump administration demonstrated what that means by issuing a new regulation allowing association health plans (AHPs) to offer coverage across state lines.

The new regulation, which was published in the Federal Register on January 5, will be available for public comment for 60 days. When it goes into effect, it will allow small employers to band together for the purpose of buying health insurance in the large group market. Specifically, it will “allow employers to form small business health plans based on geography or industry” and permit such plans “to serve employers in a state, city, county or a multi-state metro area.” It can be used to “serve all the businesses in a particular industry nationwide,” and also allows sole proprietors to join small business health plans. The Trump administration, via the U.S. Department of Labor, summarized its intended effect as follows:

These improvements stand to open health insurance coverage for millions of Americans and their families by making it more affordable for thousands of small businesses and sole proprietors. By joining together, employers may reduce administrative costs through economies of scale, strengthen their bargaining position to obtain more favorable deals, enhance their ability to self-insure, and offer a wider array of insurance options.

The impetus for the new AHP rule was provided by Executive Order 13813, “Promoting Healthcare Choice and Competition Across the United States,” issued by President Trump last October. Among the EO’s goals was “to facilitate the purchase of insurance across state lines and the development and operation of a healthcare system that provides high-quality care at affordable prices for the American people.” This seemed pretty reasonable from the proletarian perspective, yet the “news” media responded with apocalyptic rants like this one from the Washington Post: “Trump’s Obamacare order could destroy the health care system.” In this monument to thoughtful journalism, the author issued the following cri de coeur:

President Trump has made a lot of promises on health care. Somehow, though, I don’t remember him promising stadiums of cheering fans that he’d take away protections for preexisting conditions, increase deductibles, spike premiums, eliminate basic coverage requirements and, more generally, destabilize the individual health-insurance market. But that is what he said he’d do Thursday, when he signed an executive order on health care.

This was hysterical nonsense, of course, but EO 13813 and its accompanying regulations are not good news for Obamacare. So, the editors of the Post published a column Friday titled “The Trump administration’s hidden attacks on the Affordable Care Act,” by the Kaiser Foundation’s Larry Levitt. Levitt takes a “more in sorrow than in anger” approach. He even condescends to admit, “The desire to make less expensive insurance available to middle-class consumers who buy their own insurance and are not eligible for ACA subsidies is understandable.” He nonetheless seems more worried about damage the AHP regulation will inflict on Obamacare. In the end, however, he grudgingly allows that it will work as intended:

Currently… associations that offer coverage to small businesses or individuals have to follow ACA rules, which require coverage of 10 categories of essential benefits, and limit what factors can be considered in charging premiums. The new regulation would largely exempt association plans from these rules, allowing them to offer insurance to small businesses and sole proprietors that is cheaper but also covers less … Association health-insurance plans would offer lower premiums, but this would come at the expense of skimpier coverage.

What Levitt ignores is that millions of Americans want “skimpier coverage.” In the vernacular of the Obamacare apologist, “skimpy coverage” is any plan that fails to offer all 10 “essential health benefits” (EHBs), including maternity coverage for men, pediatric coverage to childless enrollees, contraception coverage to Catholics, etc. The absurdity of this is obvious. And, for anyone remotely literate in health care economics, it will be clear that such rigid EHB requirements have exacerbated the premium spikes that have ravaged the health insurance market, not to mention an uninsured rate that still approaches 30 million. The Trump administration believes that the new AHP regulation will ameliorate both problems thus:

Up to 11 million Americans working for small businesses/sole proprietors and their families lack employer-sponsored insurance. These 11 million Americans could find coverage under this proposal. Many small employers struggle to offer insurance because it is currently too expensive and cumbersome. These employees—and their families—would have an additional alternative through Small Business Health Plans (Association Health Plans).

In addition to making life easier for countless small businesses, the AHP regulation is also another nail in Obamacare’s coffin. And it’s important to remember that this is just the latest. The media has tried to muffle the sound of the hammering, so the steady sealing up of the casket has gone largely unnoticed. But, at least a dozen of Obamacare’s important provisions have been repealed by Congress, struck down by the courts, or rescinded by executive order. The provisions repealed by Congress include the 1099 Mandate, the CLASS Act, the Free Choice Voucher program, Automatic Enrollment for Large Employers, the Risk Corridor program, the Individual Mandate, and the Medical Expense tax.

Meanwhile, the Supreme Court ruled Obamacare’s mandatory Medicaid expansion unconstitutional, effectively snuffed out the Contraception Mandate and a federal appeals court declared Obamacare’s CSR bribes unconstitutional. In the near future, CMS will impose work requirements on able-bodied adults who receive Medicaid pursuant to Obamacare’s expansion of the program, and Americans disinclined to enroll in Obamacare plans will be able to sign up for low premium short-term plans for as long as 364 days. All of which will make it easier on enrollees while scaring insurers out of Obamacare’s exchanges, thus accelerating the collapse of these “marketplaces.”

In other words, Obamacare is being prepared for burial one nail at a time. The AHP regulation is just the latest to be hammered home. The “Affordable Care Act” will eventually join Prohibition, the Sedition Act, the National Maximum Speed law, and the McCain-Feingold campaign finance law in the graveyard of dumb Beltway ideas. It’s only necessary to keep our eyes on the prize.