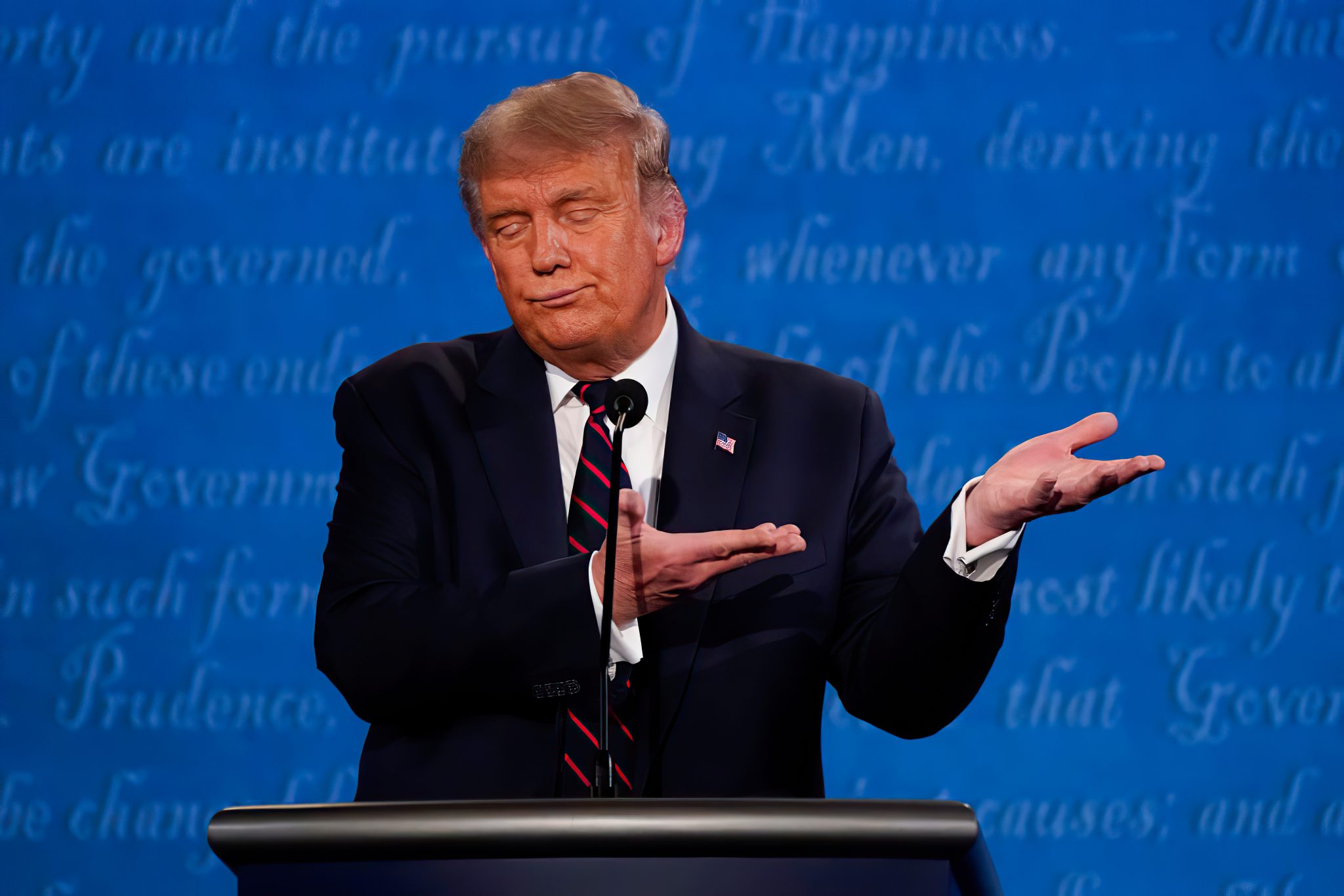 It’s the end of another exhausting week, and such weeks produce Five Quick Things columns in this space.

Hey, it’s what I’ve got. Deal with it. I don’t have the energy for Five Long Things, and, probably, neither do you.

1. Yeah, it’s a blog and not a competitor to Facebook. So what?

This week President Trump, who learned his perma-ban from Facebook is going to remain in place for the time being, launched what had previously been billed as his own social media platform.

It’s not. The From the Desk of Donald J. Trump entry into cyberspace is a blog. It’s not a platform in the sense we’ve become used to.

It’s obviously a platform for Trump, in that he’s going to be posting hot takes there like he used to do on Twitter and Facebook. But the “desk” won’t be a place where people leave comments or talk to each other.

The impression we’d all received was that Trump would be building his own social media app to compete with Big Tech. Lots of people think that’s what’s necessary, particularly as the existing alternatives like Parler, Gab, and MeWe aren’t exactly winning awards for their user experience (and if you’re still looking let me suggest you check out The Speakeasy, which has its users pretty fired up and is just starting to take off).

Perhaps Trump suffered a bit from his customary buildup. Perhaps he overpromised. He does that a little, but he’s a promoter — it’s what promoters do. For Trump, a blog was what he needed to have. He needed a place on the web where he could drop takes and get them into cyberspace, and a Twitter or Facebook account wasn’t going to do it for him anymore, obviously.

For whatever reason Trump hasn’t just moved his online presence to Parler or Gab. Maybe he ought to join us at The Speakeasy (and maybe you should, too). But he’s under no obligation to do that, and what’s pretty obvious is that Trump wants to control the site where his takes originate.

That’s understandable. He doesn’t want to get canceled. Parler has already gotten blown up once; if Trump were to park there it would be only a matter of time before some cybervillain took Parler down again. As for Gab, they’ve had their own problems with cancel-mob attacks. So keeping things in-house makes sense.

And Trump’s adviser Jason Miller says there’s more to come on the social media front. Which didn’t stop the internet, and in particular the Twitter mob, from savaging the former president for the blog — and not just the Left.

It’s amazing the expectations people put on Trump. As president, that made some sense. As a private citizen, there’s really only so much you ought to expect the man to do, and he’s doing a lot. Trump is raising a pile of cash, he’s recruiting fearless, passionate conservatives for the 2022 midterm elections, and he’s doing battle with a frightening, holistic left-wing political and corporate regime bent on driving him out of the American cultural mainstream. No ex-president who has zero to prove and is well past retirement age would be expected to do more. Give the guy a break.

The real concern is that nobody else is picking up the slack. Well, that’s your responsibility. Get involved. Find a way you can contribute. You don’t have to score touchdowns. First downs add up, so find a way you can get one. Be a leader in your own right, and look for that first-down line with all the decisions you can make.

(And join The Speakeasy if you want a social media platform that’s conservative-friendly and fun to use.)

Liz Cheney is out, and Elise Stefanik is in. Cheney has decided not to fight her ouster as chair of the House GOP conference, the third-ranking spot in the Republican leadership totem pole on the House side.

Naturally, the Washington establishment is screeching about it and whining that she’s too good for the Trumpy Republican caucus in the House of Representatives.

Which is disgustingly dishonest. These people regularly revel in the downfall of conservative pols. At least twice a week you see some D.C. blue-blood penning a piece somewhere calling for the resignation of this or that official because he or she can no longer be effective due to whatever substandard action is in question. Everyone in Washington routinely joins in with those cancel mobs, whether they act with merit or not.

But everything Liz Cheney is in trouble for, Liz Cheney did to herself.

The thing to remember is Liz Cheney survived her vote to impeach Donald Trump. House Minority Leader Kevin McCarthy, who has his own problems and really doesn’t need to take on Liz Cheney’s as well, took her side and kept her around after the first wave of acrimony surrounding Cheney’s Never Trumper outbursts.

It’s when she refused to shut up about Trump that she made herself untenable.

As Mollie Hemingway noted on Twitter, it isn’t the hardcore Trumpers in the House who are getting rid of Liz Cheney. It’s the Republicans who are trying to move past Trump who want her gone. Liz Cheney continuing to run her mouth about how Trump is pushing some sort of Nazi Big Lie surrounding the 2020 election makes that impossible, and the conference chair is supposed to be the one who makes everybody get along.

Cheney’s defenders seem to forget that she stinks at that job.

The conference chair is supposed to raise money. Who wants to give Liz Cheney money? She’s a walking political corpse back home in Wyoming, for crying out loud — it’s almost a sure thing she’ll lose reelection if she even runs.

The Washington establishment loves Republican losers, which is why Liz Cheney is a star to them now. That they don’t love Trump is an indication they might actually think his Big Lie about the 2020 election isn’t so big after all. But they’ll never admit that.

It’s gotten very little attention from the legacy media, but the Arizona state senate’s forensic audit of the 2020 presidential election returns in Maricopa County, where Phoenix is, has kicked up the kind of fuss that should raise an eyebrow or two.

The audit isn’t going to change the outcome of the 2020 election in Arizona. It’s been called “ludicrous” by Cindy McCain, as though anybody cares what she thinks. The Arizona Senate is conducting it using its legal subpoena power in order to find out whether the kinds of manipulation or vote-rigging that have been alleged to happen in Maricopa are legitimate, and if so, to look at reform legislation that would prevent such irregularities from recurring.

The response to the audit initially was that it was a waste of time, because Arizona’s votes were already audited and certified. Well, fine. But wasting time is one of the things government does as a matter of course. If nothing would be found in a forensic audit of the Maricopa vote, what’s the harm?

Then the Arizona Democrats sued to stop the audit. A judge essentially told them to put their money where their mouths were, and said he’d pause it if they put up a million-dollar bond. That was the end of that.

Then Katie Hobbs, Arizona’s Democrat secretary of state, stuck her nose in. Hobbs was even caught trying to crash the audit by sending one of her underlings in posing as a member of the media. Incidentally, if you do an image search for Katie Hobbs your computer will ask to speak to your manager.

And now the Department of Justice is threatening to invade the audit for fear it might be “partisan.” After what just happened to Rudy Giuliani. Talk about rich.

We’re not predicting that anything will come of the Maricopa audit. But we’re not dismissing the possibility, either. One can’t help but wonder, given the reaction from the Left, whether or not somebody over there isn’t worried about a secret getting out.

4. The worst governor ever.

“You already killed my grandmother.”

– Thousands of New Yorkers to Cuomo

5. Norway seems to be doing better than Hollywood.

If you’re looking for something worth filling your time, you might want to check out Occupied on Netflix. It’s an interesting show out of Norway. I’m noticing that more and more often, starting with the hilarious comedy Lilyhammer a few years ago, the Norwegians are outproducing Hollywood in terms of watchable film and TV. Not that this is hard to do, as Hollywood is totally incapable of making anything worth watching anymore. The other night I finally got around to watching Christopher Nolan’s Tenet and was flabbergasted at the notion something so thorough unintelligible could be posed as entertainment.

As Nolan might be the best filmmaker Hollywood has to offer, and given the pitiful fare on offer at the Oscars, not to mention last weekend’s abysmal box office figures, it’s not unreasonable to conclude the American film industry is deader than Liz Cheney’s political career.

Back to Occupied: it’s set in the “near future,” during which a far-left prime minister gets elected in Norway and he shuts down all the oilfields offshore in the North Sea. Nobody really thinks he’ll follow through on that zany campaign pledge, but he does it.

This happens at the same time the U.S. has become fully energy-independent and has pulled out of NATO, and the Middle East has completely erupted in war, which trashes oil production there (so, essentially, the third year of the DeSantis administration). With Norwegian oil coming off the market, the EU is in the middle of a massive energy shortage.

Essentially, the EU and the Russians get together and rein in the Norwegians, who in characteristic fashion politely accede to being occupied by Putin’s troops so that Russia can supervise Norway’s oil production returning to normal levels — and then things proceed to get incrementally worse.

It’s an interesting “what if,” it’s actually almost plausible, and you don’t get an impression one way or the other about the filmmakers and their take on the issues involved. At least not in the first six episodes.

It’s the kind of storytelling you could have seen out of Hollywood 10 or 15 years ago, but not anymore. Maybe they’ll have to open up a Beverly Hills Hotel and a Brown Derby in Oslo soon.