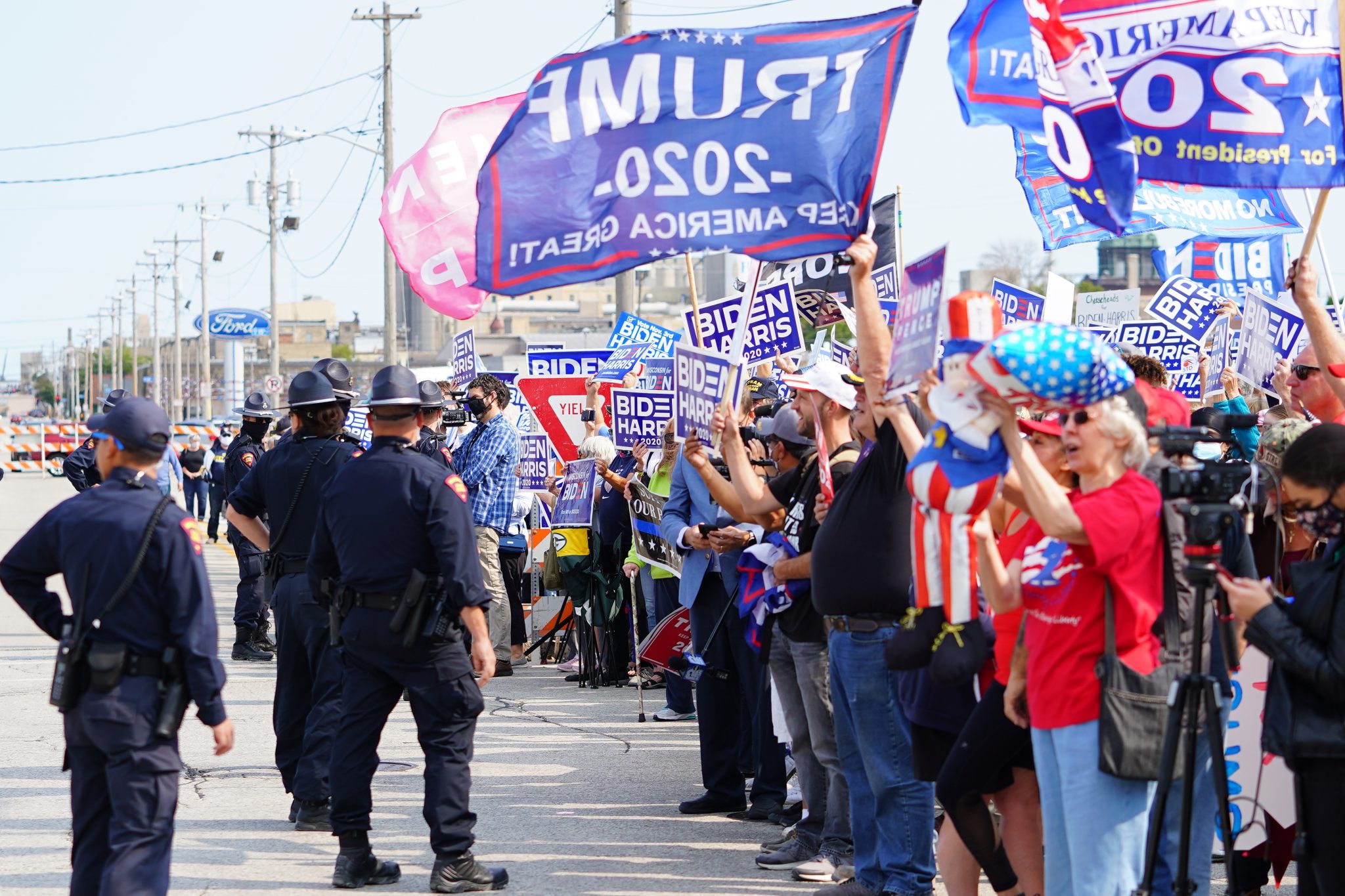 What are the signs of the times telling you?

A road trip to rural Michigan last weekend traded the sea of Arlington “Dump Trump” signs for these: “Trump–Pence 2020,” “Jesus 2020,” “No More Bulls**t,” “My Governor Is an Idiot,” the occasional John James shoutout — and more Biden–Harris signs than expected.

A conversation among two young white men at a bar in Sandusky, Ohio, conveys the prevailing mood: “I just hope Trump wins cause he’s so damn entertaining.” The two were laughing about an anti-Kamala tweet. “He’s wild, man.”

But here’s the sign that gave me hope for the country. From my alma mater’s library: 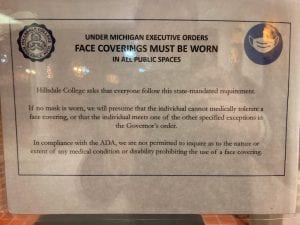 To be clear, Hillsdale College are carefully following all COVID-related public health ordinances so the college can stay open and stay safe. Students who have come in contact with anyone who has tested positive are being quarantined. A professor close to the college’s president spoke about how painstakingly the college planned the only in-person commencement in the state back in July, with Gov. Gretchen Whitmer’s attack dogs snuffling around for any chance to clamp down. Their lawyers and the administration built a case that commencement was protected under the First Amendment, the sort of gathering exempt from restrictions under Whitmer’s mandate. They pulled it off without any positive COVID tests.

The library sign was in the same spirit. It followed the letter of the law, asked people to be reasonable, and then sent them about their business.

It was refreshing to see authority used, a bit cheekily, to encourage others to exercise their freedom responsibly — and to treat nonsensical mandates as such, not as an opportunity to control and police others.

Masks are a partisan issue now, for sure. A recent Gallup poll showed that Democrats wear masks and social distance more religiously than Republicans. And that split makes people even more afraid on the one side and frustrated on the other.

But this only makes it more important for people to be allowed to choose their own levels of risk. Businesses and public spaces used to do the bare minimum in abiding by government regulations, many of which were considered hindrances to serving their customers. Now, many go out of their way to overstep the bounds of reason, to show their customers that they’re keeping us extra safe.

And hoping we won’t notice that it’s all a massive CYA campaign.

In Ohio and Michigan, there was a sense of humor about all this, a confidence that whatever happens with the election and COVID, the sun will rise and maybe even show us something to laugh about. Back in the D.C. area, I am continually reminded in dour, bureaucratic tones of the paradox that yes, democracy is dying a gruesome death, but I will be very, very, very safe as long as I do what they say.

And as long as Judge Amy Coney Barrett doesn’t get confirmed to the Supreme Court.

On the latter point, I don’t have much to say to those who consider such an impressive jurist and all-around cool lady a threat to the country. But here’s a fun musical tidbit from the hearings instead:

Do you know what a Piccolo is?

Well-qualified though she may be, Amy Coney Barrett confessed she didn’t know toward the end of her confirmation hearings Wednesday. Then Sen. Lindsey Graham (R-S.C.) briefly confused me about the history of country music when responding to a very Nashville illustration from Sen. Marsha Blackburn (R-Tenn.) as the day wrapped up:

I’m gonna tell you about where I grew up. I don’t know why, just seems to be a good way to end this thing…. I grew up in a small town called Central, South Carolina, the first in my family to go to college. And my dad owned a bar, a pool room, and a liquor store…. I remember, speaking about country music — do you know what a Piccolo is?

Well, you’re too young. A Piccolo is something that you put money into to listen to a song.

I had turned down the volume on the friendly-fire sections of the hearings, but this caught my attention. Country music lovers paid tiny-flute players to do Johnny Cash renditions?

But no. Barrett seemed to understand what Graham was getting at. After all, she is brilliant and an inspiration in every way (including, as she told Ted Cruz, playing piano for 10 years and encouraging her children to take lessons, too) and is obviously quick on the uptake.

I am a little slower, so I had to Google it.

Turns out Piccolo was the original brand name for the jukebox: 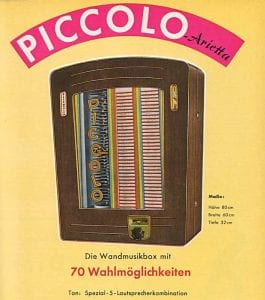 Graham said his favorite single on the Piccolo was “My Wife Ran Off With My Best Friend, and I Miss Him.” Music distribution tools and tastes change, but politicians’ terrible jokes never do.

The Supreme Court changes, too, and this year, it seems, in a way that favors justice.

Has moving much of life online affected your sense of what is “permanent”?

Speaking of singles, a conversation with a musician friend over the weekend made me rethink media and music distribution. He’s the drummer for a band that plays gigs and releases original music regularly. They’re a lot of fun to watch. But he told me that when it comes to finding new fans, they’re up against people’s attention spans and the structure of streaming platforms themselves.

A band that used to open for them got their break through a line that caught on on TikTok (a popular platform for short videos). Those seconds-long clips aren’t even in the realm of singles anymore, so artists can forget about making albums — people only listen to a new song for a couple seconds on Spotify, and if they don’t love you immediately they click “next.”

We talked about how news media is similar: the headline reigns, and the first graph better rule, or it’s over.

That’s an incredibly short elevator pitch, and both music and the news cycle are becoming ever more ephemeral, driven by what hits people emotionally, gets shared, and goes viral.

But there’s still the chance that you’ll catch something good.

The surfaces we skim over still have impressive depths, if we can get to them. Paul Morley, the rock music critic whose upcoming biography I’ve been reading, wants to revive the term “permanent music,” which is

not only worth listening to for emotional and intellectual stimulation but was actually a new thing … as thinking goes, about what it is to be alive, about what music is, there is so much it achieved and proposed that has yet to be understood and properly assimilated.

There is so much that is left to be understood, if only our attention spans will hold. Unfortunately, tech platforms weren’t built that way. They were built to keep us on TikTok, awash in the pale glow of neverending “newness” instead of the brilliance of lasting things — like discovering a new band and really getting to know them, or building an appreciation of the way excellent music can enrich the way we listen in a way TikTok videos can’t.

I wonder if we’re more or less aware of that now that we’ve spent almost a year mediating most of our lives through screens. Abstractly, I miss hearing concert venues pulsing with sound. But then again, Spotify is more accessible, more efficient, and gives me more power in choosing my music. I’m more and more at home here, but never quite at ease. And certainly never fully drawn out of myself, the way I used to be in a performance hall.

Online, our state of constant chaos seems almost routine by now. But only almost. We’re past the point where it seems rational to expect a restoration of normalcy, but I’m watching and listening intently for signs of a return to reality.