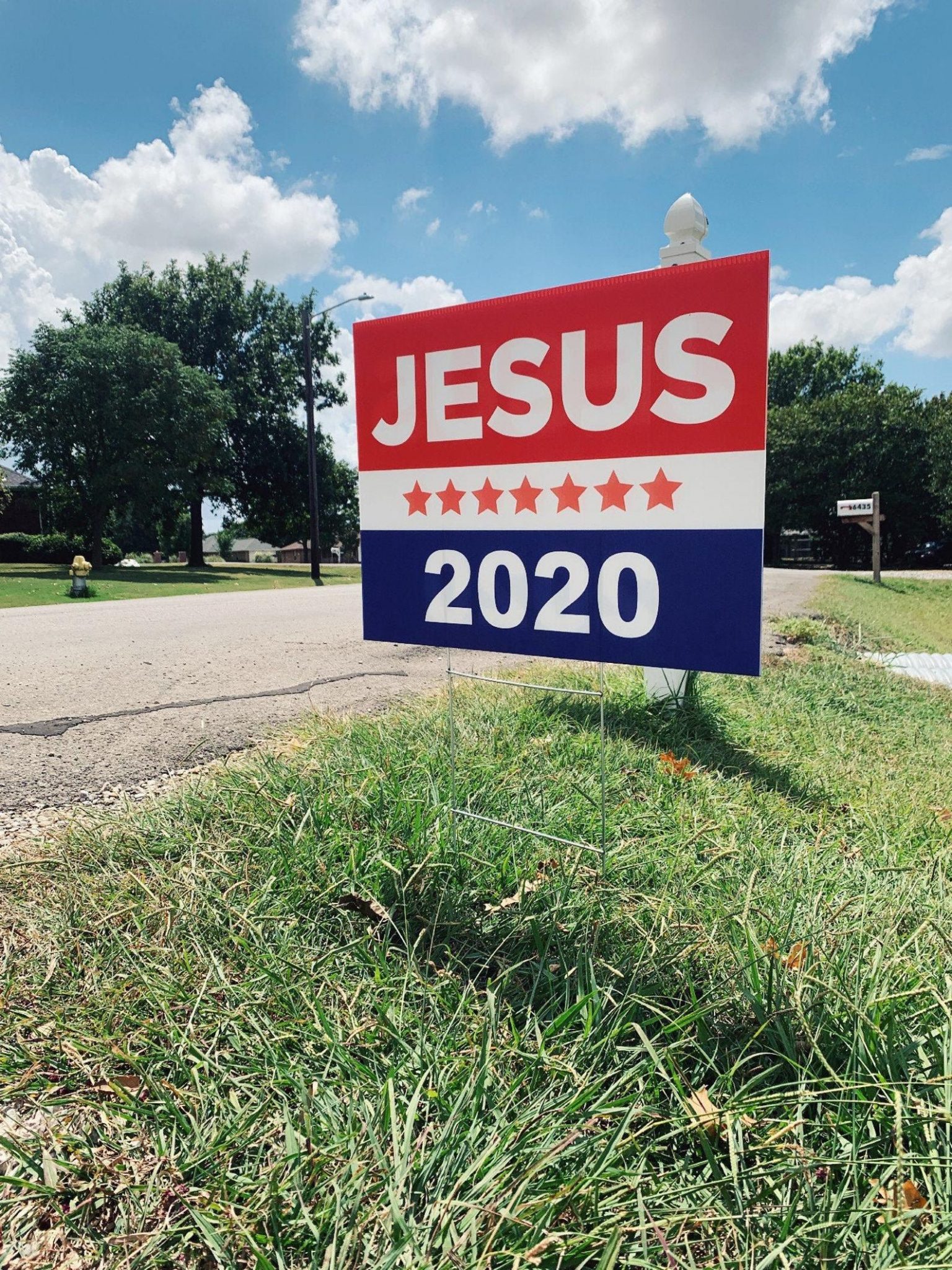 The Jesus 2020 presidential election yard signs are the product of a provocation. In 2016, Evangelical Never Trump elites practically forbade their erstwhile followers to vote for Trump. That prohibitive directive from on high did not sit well with rank-and-file evangelicals four years ago, and it does not today. Now the pew-sitters have had enough and want to have their say.

In Montgomery County, Alabama, where the Jesus 2020 phenomenon originated, it’s harder to spot a domicile or a homestead lacking the sign than bearing one. Their reach now extends from California to the Carolinas. The name “Trump” figures heavily in the appeal of these signs to evangelicals. But “Trump” is not the first name that figures in — emphatically not. Thus, the presence of the letters J-E-S-U and S where the letters T-R-U-M and P might have appeared, but, conspicuously, do not.

Support for Trump and the worship of God were never at odds, never mixed up, and never in competition for evangelical Trump voters.

The messaging is at once clear and complex, simple yet sophisticated, political for sure, but without being blatantly partisan. The sign’s attraction springs from a noble but wounded evangelical pride churning and heaving up in response to four years of provocation — a reprimand and a scolding repeatedly and publicly delivered by the very leaders who might have represented and encouraged evangelicals both before and after they voted for Donald J. Trump. But they did not.

Jesus Is Lord and Trump Is Our President

Jesus 2020 evangelicals declare that their first and highest loyalty in any election never rests with any single issue, nor with a certain party, but with a person. It’s always the same person. His name has never appeared at the top of any political party’s ticket because he never runs for office. His name is Jesus Christ.

For 80-plus percent of evangelicals, that highest and unrivaled loyalty not only failed to prevent their vote for Trump in 2016, but that loyalty also prompted that vote, and will do so again this November. Support for Trump and the worship of God were never at odds, never mixed up, and never in competition for them.

The provocation that produced the yard sign issued not from a natural opponent, much less from any declared enemy of evangelicals. The blast of reprimand sounded from their putative leaders, their brothers and sisters in the faith who name the name on the sign together with them. The contempt issued from the lips of the Never Trump elites whose high positions, comfortable lifestyles, and plenteous benefits the Trump supporters subsidize with their few but hard-won dollars — dollars sacrificed and parted with as a sacred trust week by week.

I say “provocation” because the evangelical elites did not merely admonish would-be Trump voters to weigh the consequences of supporting a man like Trump for the highest office in the land. No. Evangelicals were told they would have to deny their faith in order to vote for Trump. They were told that to vote for Trump meant putting politics before the gospel. They were told that support for Trump by a Christian smacks of the greatest sin imaginable, idolatry!

This indictment seemed to validate and exacerbate the contempt already heaped upon evangelicals by Democrat politicians. Like Barack Obama and Hillary Clinton, did their own leaders view them as smelly Walmart shoppers, a basket of deplorables, who cling to their guns and their religion and are uncomfortable with people who don’t look like them?

The Elites Don’t Speak For Us

Happily, one evangelical who did speak for the Trumpers happened to be Dr. Wayne Grudem, the most prolific and best-selling evangelical theologian alive and an expert on the intersection of Christianity, ethics, and politics for four decades running. Grudem recently published a list of 30 actions Trump has taken and policies he pursues that are good for America and compelling reasons for Christians to reelect him in November. Jesus 2020 evangelicals believe those actions and policies represent their values far better than do critical race theory and the divisive, race-baiting, identity politics running rampant in too many evangelical institutions the Never Trump elites lead.

Grudem also recently published a heartfelt letter received from an evangelical Never Trump friend who posed this question: “What would Trump have to do to make you stop supporting him?” Jesus 2020 evangelicals have a different, more urgent question for their Never Trump accusers: “What does the Democrat Party have to do to trigger your vocal Christian opposition?”

If these actions and policies are not enough to evoke reflexive recoil from the Democrat party by the evangelical elites, why not? Could it because, unlike the Deplorables, the No. 1 priority of the elites is not captured by the name on the freshly produced Jesus 2020 signs? Could it be that the non-negotiable goal of the Never Trump elites is to dissociate publicly from racism and to accomplish the necessary virtue-signaling that entails? If so, as Shelby Steele has demonstrated, that maneuver can only be achieved on the terms set by the Left and the Democrat Party because African Americans vote virtually as a bloc for the Dems. To the Never Trump elites who charge evangelical Trump voters with putting politics before the gospel, the Jesus 2020 evangelicals respond with words Jesus himself anticipated: “physician, heal thyself.”

Eighty-plus percent of evangelicals got it right four years ago and will do so again in a few weeks. They will head to the polls with much more confidence this time around because now they know that Trump, despite character flaws, but in stark contrast to the Never Trump elites, is a courageous, trustworthy, promise-keeping leader. With the Jesus 2020 sign, rank-and-file evangelicals quash the preposterous charge of idolatry and deign to speak for themselves since so many of their putative leaders either cannot or will not do so. They will vote for Trump with consciences clearer now than they were four years ago.