One of the main problems with America in the last half century has been the drastic decline in the growth of productivity. That is, the amount of goods and services each worker produces has grown since 1973 but not by much — by nowhere near as much as it did in the 30 years before that.

No one knows why. Is it Chinese competition? Higher energy costs? Why?

I think I’ve figured it out. It’s this damned cell phone or smart phone. I figured this out because I noticed in the last several years that I get almost nothing done each day. I used to get a lot of writing and reading done and still do on long airplane trips.

But more and more my days are just eaten up by answering barrages of texts and emails. Day and night they pour in and I feel compelled by some strange modern mental disease to answer them. Who knows what the calls might be? Might be Hollywood calling. Might be Warren Buffett. Might be some girlfriend from college days. Might be my broker. Could be the President. Could be Julie Nixon Eisenhower. It’s almost like fate itself — nothing less than destiny — is reaching out to me.

So of course I don’t let it get far away. And of course, trivial matters like work are ignored.

It’s like this for everyone. Only the young also await and take calls about love, betrayal… heartache.

Everything comes to us via the cell phone. The smart phone.

We talk on it but we don’t get any work done… and another day goes by. And there goes productivity. Contact. Yes. Amusement. Yes. But production? That’s for another era. We used to have the era of work. Now we have the epoch of talk.

Meanwhile, on another subject, I, your humble servant, wrote a few words about Oxford, Maryland over Halloween. I wrote about how peaceful and loving and friendly it was. And what great costumes the kids made.

I meant to add a photo — taken with my cell phone — of the single best costume I have ever seen: a little girl as a jellyfish. She had a transparent plastic umbrella with lights dangling from it — the perfect costume for an area with a helluva lot of jellyfish. apparently, the photo did not get in, so here it is now. 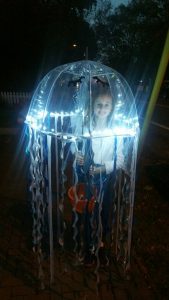