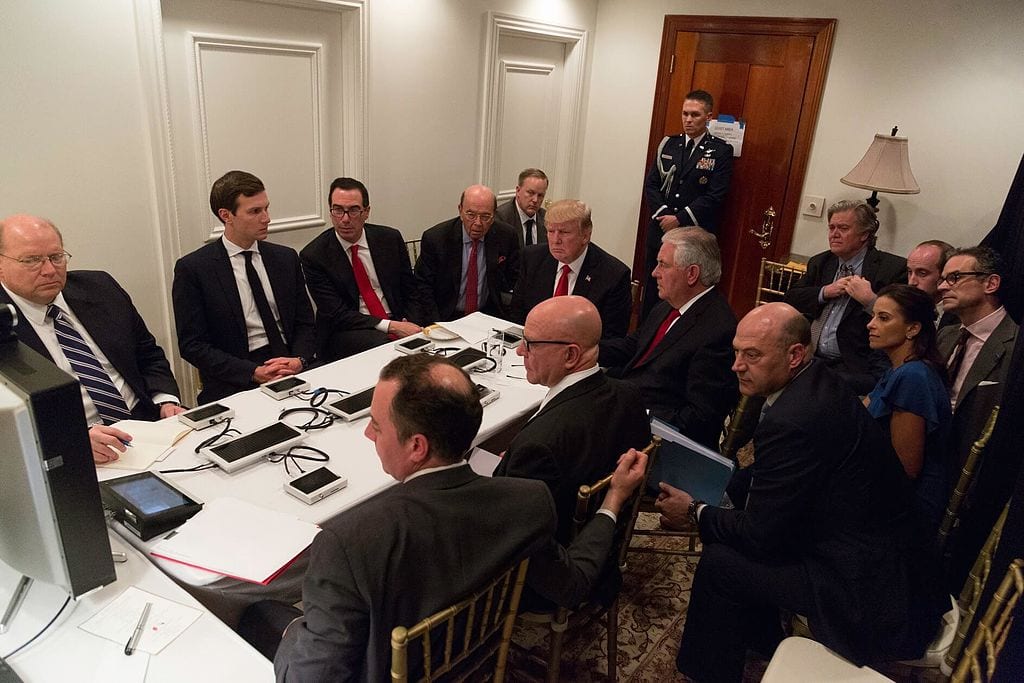 In 2010, when Gen. Stanley McChrystal and his aides were quoted in a Rolling Stone piece belittling top officials in President Barack Obama’s administration, including Vice President Joe Biden, the New York Times went into high dudgeon.

A Grey Lady editorial asked if Obama could trust McChrystal, his top Afghanistan commander, after his “hugely undisciplined comments” and argued that Obama should fire the revered general — or, at the very least, dress him down before sending him back to a combat zone.

The word “insubordination” was tossed around liberally — even though the military’s inspector general found no wrongdoing a year after Obama forced McChrystal to retire.

Beltway-think was largely united that a president shouldn’t have to put up with a general not firmly in his camp. But when President Donald Trump fires staffers who buck his agenda, they call it a “purge.”

Oddly, a town stacked with institutionalists seems to have forgotten some basics — that a president has a right to insist on staff members who are on board with his agenda.

And when people outside the White House urge Trump to get rid of staffers who undermine his agenda, it’s news. I talked to one such individual on background who told me that if Trump had been better at picking staff on Day One, “he would not have been impeached.”

A shrewd chief of staff would have acted to end the two-and-a-half-year Russian probe that found no coordination between the Kremlin and Trump Tower, an outcome that was clear early on, this individual argued. And a savvy personnel chief could have transferred the whistleblower who went overboard in complaining about Trump’s July 25 phone call with Ukrainian President Volodymyr Zelensky in which the president — wrongly, but not an impeachable offense to my mind — asked Zelensky to dig up dirt on Biden.

I see two reasons for the double standard.

First, Washington doesn’t give Trump the benefit of the doubt.

Second, Trump blows through staffers as if they’re Kleenex.

McChrystal was an aberration. Lt. Col. Alexander Vindman, the national security adviser who testified in Trump’s impeachment trial and was escorted out of the White House for his testimony, is one soldier among many.

As a candidate, Trump boasted that he would hire “the best people.” But if he had hired the best, he wouldn’t have fired so many high-level officials — and he wouldn’t badmouth them as he shows them the door.

Kathryn Dunn Tenpas has chronicled Trump’s record turnover for the Brookings Institution. She found that 82 percent of his “A-team slots” have turned over — more than a third of them have had two or more occupants.

Diehard Trump fans forgive his bad hires as the understandable result of a nonpolitician winning the White House. They don’t see a downside. But as Tenpas noted, most presidents have served in office before and can rely on a “network of aides who have helped them over the decades.” To the contrary, Trump is running the White House in “insular” fashion as if it is a “family business,” Tenpas added.

Except because the shop is so huge, Trump has had to reach out and hire unknown actors, some of whom may not have been as loyal to him as he wanted and many of whom he alienated as they put their reputations on the line in his service.

Consider Attorney General Bill Barr, who has warned Trump not to tweet about cases being handled by the Department of Justice. And still, Trump tweets about former adviser Roger Stone’s judge and jury.

Yes, White House aides should quit if they do not agree with his policies, and some did. But some stayed because they saw a duty to steady a volatile ship. And it seems some stayed to poke holes in the hull.

So the next question might be: Has Trump learned from his bad hiring choices? The answer to that would be yes. But he didn’t learn the most important lesson: that he needs to be more careful about his staffing decisions.

After ousting personnel deemed insufficiently loyal in the wake of his impeachment and acquittal, Trump replaced the director of the Presidential Personnel Office, Sean Doocey, with John McEntee, 29, a former Trump bodyman and campaign aide fired by Trump’s second chief of staff, John Kelly — reportedly after he had trouble obtaining a security clearance because of gambling issues. McEntee’s apparent mandate: chief loyalty officer.

Second chances are a good thing, but it’s hard to believe McEntee is the best person for a job that requires a seasoned hand and who can gauge not only loyalty but also ability. You get the feeling Trump doesn’t think it matters whom he hires as long as he is in charge. It is an approach that unfailingly bites back.